Which Washington Capitals team was the best the organization has ever put on the ice? Four more contenders battle it out in Round 1 of our tournament to answer that very question.

Three-quarters of the bracket is now complete (go back and see the first three quartets here, here and here, and be sure to do your civic duty and vote in each poll), but there are still four slots to fill, and two more eliminations to make...

The 1984-85 Caps were in many ways strikingly similar to the previous year’s team, with both finishing the regular season with 101 points, a +.14 per game goal differential and a fantastic team defense (the Caps slipped from the League’s top spot in goals-against to number two, but made up for it by moving up from twelfth to eighth in goals-for) with the likes of future Hall-of-Famers Rod Langway, Scott Stevens and Larry Murphy patrolling the blueline. But this team was known for its "Goal Dust Twins," as Bobby Carpenter became the first U.S.-born 50-goal scorer in NHL history (winding up with 53) and Mike Gartner hit that magical milestone as well. Stevens put up a monster season of his own – 21 goals, 65 points and 221 penalty minutes – and the Caps once again entered the playoffs with home ice advantage in the first round.

Once there, they’d meet the Isles for the second-year in a row - but this time around it was a New York team that finished 15 points behind the Caps in the Patrick Division. The Caps won the first two games, both in overtime… before dropping three straight and hitting the links. For all the goals the team scored during the regular season, Gartner was the only forward who managed more than a single tally in five playoff games – part of what would become an increasingly familiar trend in the years to follow, as Caps’ players and the team as a whole frequently followed up strong regular seasons with disappointing playoff performances (save for the run to the Final in the 1997-98 season).

Three years after that fateful 1998 run, Ron Wilson led Washington to a second-consecutive Southeast Division title with a team that finished thirteenth in the 30-team NHL in both goals-for and -against. The 2000-01 Caps were still trying to recapture whatever it was that propelled them to the Finals just a few springs earlier, and some of it was still there – Peter Bondra scored 45 goals, Adam Oates added a League-best 69 assists, Sergei Gonchar had 57 points and Olie Kolzig 37 wins.

What wasn’t there was a favorable playoff schedule, and with the Caps matching up with Pittsburgh in the first round, the results were predictable... though somewhat mercifully less embarrassing than in other losses to the Pens, as the only series lead the Caps held was at 1-0. Of course, that doesn’t mean the loss was any less painful than the others, as the final buzzer sounded on the series moments after a Game 6 overtime turnover by Gonchar wound up behind Kolzig courtesy of Martin Straka. Stunned.

So which team would win a best-of-seven, 1984-85 or 2000-01? Could Wilson's bunch get any pucks past a dominant defensive squad, or would Bryan Murray's boys move on?

Bruce Boudreau burst on the NHL scene in 2007-08 (which we saw in this tourney's 8-vs.-9 match-up), inheriting Glen Hanlon's broken bunch at Thanksgiving and somehow turning it into a playoff team. Was the Jack Adams-winning coach a one-hit wonder, or could he build on his early success? In 2008-09, he proved it to be the latter.

When the playoffs rolled around, the Caps drew a 95-point Ranger team and proceeded to lose Game 1 on home ice with Jose Theodore stopping just 17 of the 21 shots he faced. Boudreau gave the Game 2 start to Semyon Varlamov, who posted a 1.17 and four wins (two by shutout) over the series’ final six games (which was as many NHL appearances as he’d made prior to the series), despite losing a 1-0 decision in that Game 2. Sergei Fedorov’s goal with five minutes left in Game 7 sent the Caps on to the second round, and Varly would stay hot for the first three games against Pittsburgh (where a Kris Letang tally in Game 3 prevented the Caps from taking a commanding 3-0 series lead) before showing signs of fatigue... and a subpar defense. The Caps would yield 42 shots-against in three of the series’ final five games, and they managed to win one of those to force a Game 7 (thanks, David Steckel), but an early Marc-Andre Fleury stop on an Alex Ovechkin breakaway seemingly turned the tide dramatically in Pittsburgh’s favor and they routed the Caps on Verizon Center ice.

Those Caps gave the League everything it could have wanted – an exciting team with a marquee player at his peak squaring off in an epic series against its rival and their superstar(s). And it gave Caps fans a glimpse of what was to come for a young team on an upward trajectory.

One of the few Caps teams in this tourney that didn’t have the pleasure of facing the Pens in the playoffs was the ever-so-dapper 1988-89 team, D.C. hockey’s only division champ prior to the creation of the Southeast Division. The Caps finished third in the NHL in points with good defense and goaltending as well as a decent bit of scoring that eventually included Dino Ciccarelli, who scored a dozen goals in 11 games after being acquired from Minnesota in a late-season blockbuster that sent Gartner and Murphy the other way. Oh, and some tremendous lip-syncing. With Ciccarelli in the fold, the Caps had a goal-busting trio of 40-goal scorers (Geoff Courtnall and Mike Ridley being the other two) and a solid blueline heading into the post-season as Patrick Division Champions. Once there, however, they were unable to handle their first-round opponent, Philadelphia, who ran off four wins in five games after the Caps took Game 1. The series would be Bryan Murray’s last behind the Capitals bench, as seasons of disappointment caught up to him after a slow start the following season and he was replaced by his brother.

With that, we've got our bracket filled out. Make sure you've voted in all three first-round "sub-regionals," and see you in Round 2... 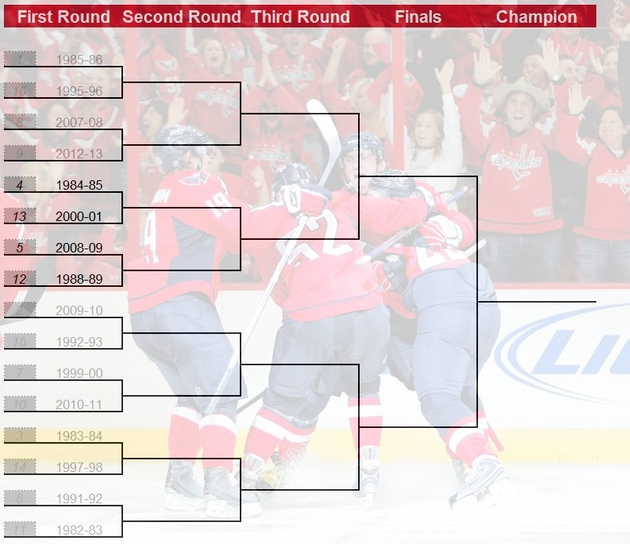