Which Washington Capitals team was the best the organization has ever put on the ice? Four more contenders battle it out in Round 1 of our tournament to answer that very question.

Last week our tournament opened with the top-seed in action (and be sure to click through for background if you're wondering what we're talking about. Also, be sure to vote - the poll is easily missed all the way at the bottom.). Today we've got the #2-seed headlining...

Then the playoffs rolled around. After dropping a stunner in overtime in Game 1, a Backstrom hat trick in Game 2 (completed in OT) leveled the series heading back to Montreal, where the Caps took both games with relative ease and set themselves up to close things out at home in Game 5... before dropping three straight and hitting the links. (This is already getting depressing, isn't it?) There was plenty of blame to go around - from Jaroslav Halak to Bruce Boudreau's coaching to a lack of secondary scoring to a woeful power-play to fog - but ultimately all that mattered was that it was another Caps team that fell far short of expectations.

The 2009-10 team will face the 1992-93 team, which was Terry Murray's third - and last - full season behind the bench since awkwardly replacing his brother in the middle of the 1989-90 campaign (Terry would be fired 47 games into the 1993-94 season). One year after finishing in the top-four in both goals-for and -against, the Caps slipped into the middle of the pack in both categories, winding up tenth (of 24 teams) in each metric. The team had pretty good balance on offense - nine 20-goal scorers, three of whom (Peter Bondra, Mike Ridley and Dmitri Khristich) topped 30. But the more notable offensive achievement for that team was that it had three 20-goal defensemen: Kevin Hatcher (34, which led the League), Al Iafrate (25) and Sylvain Cote (21). That Caps trio accounted for three of the NHL's seven rearguards that topped 20 goals that season and represented the only time a team has had three 20-goal scorers on the blueline in the same season.

The 92-93 Caps faced the Isles in the first round of the playoffs and won Game 1 on the road, only to lose the next three in overtime (twice in double OT) before eventually losing the series in six games.

So which team would win a best-of-seven, 2009-10 or 1992-93? Could Don Beaupre or Rick Tabaracci have Halak'd the underdogs to victory? Could a balanced attack with offense from the back-end win pull off the upset or did Boudreau's boys have too much firepower?

In their first quarter-century of existence, the Caps won just one regular season division title. But new ownership and a still-new division - the Southeast - gave them opportunities at the turn of the millennium, and Ron Wilson's 1999-2000 team would be the first of six division winners in 11 years. Led by Vezina-winner Olie Kolzig (41-20-11/2.24/.917), the Caps won the Southeast by four points and once again readied themselves for a playoff run... and once again ran into the Pittsburgh Penguins, the sixth time they'd face their nemesis Western Pennsylvania in a ten-season span (and they'd get 'em again in 2000-01, for good measure).

The 44 wins that team had during the regular season marked the high-water mark of the Wilson Administration, and the 196 goals the Caps surrendered still stands as the fewest allowed in a season, but Jaromir Jagr proved to be too much to handle in the postseason. Washington would rebound from #68's four-assist effort in a 7-0 Game 1 rout to play four-straight one-goal games - but unfortunately for the D.C. faithful, only one of those went the Caps' way (a Game 4 sweep-avoiding home win), and Jagr finished the series with ten points and a pair of game-winning tallies.

Luckily for that 1999-2000 team, they don't have to face Jagr in this tournament... in part because no Jagr-led Capitals team qualified. (And yes "Jagr-led Capitals" is an oxy-moron.) The team they are pitted against in Round 1 is the 2010-11 squad, one still reeling from the disappointment of the prior season detailed above. The crushing, embarrassing loss to Montreal to end early a season that some had expected to be a coronation had led Boudreau to change his focus a bit from run-and-gun to a more conservative approach, a pendulum which swung even further after a lengthy losing streak (which was televised on and off the ice) had Bruce Boudreau embracing - gasp! - the trap.

The season was highlighted by a New Year's Night win outside in Pittsburgh and, yes, another Southeast Division title. The Caps dispatched of the Rangers in five games in the first round, but were swept out of Round 2 by Tampa Bay. Had the Caps learned the "right way" to play? It sure hadn't seemed like it.

So which team would win a best-of-seven, 1999-2000 or 2010-11? Would a team that had been to the Finals just two springs earlier have a leg up on Boudreau's first team to take a real step backwards, or had Ovechkin's Caps actually made enough strides in the right direction in terms of understanding "playoff hockey" to get by a Vezina-winner?

Halfway through the first round, here's a look at our bracket: 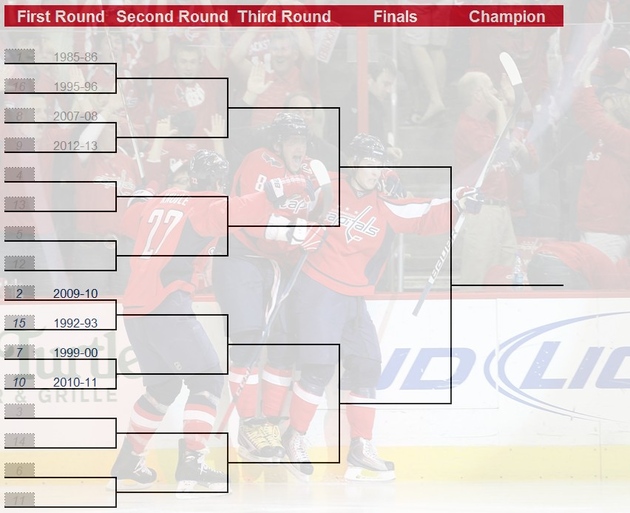