Which Washington Capitals team was the best the organization has ever put on the ice? Four contenders battle it out in Round 1 of our tournament to answer that very question.

Share All sharing options for: The All-Time Capitals Team Tournament, Part I

Well, they've been to the Finals exactly once, so there's your answer, right?

That 1997-98 squad was an overachieving, blue-collar (figuratively and, on many nights, literally) bunch that turned timely scoring and otherworldly goaltending into the deepest playoff run in franchise history. They also got some help along the way, as they were the only favored team in the East to make it out of the first round, setting up second- and third-round match-ups with the eighth-seeded Ottawa Senators and sixth-seeded Buffalo Sabres, respectively, after dispatching of the fifth-seeded Boston Bruins in Round 1.

But what if instead of the bottom of the Eastern Conference bracket, Ron Wilson's group had to go through Bruce Boudreau's 2008-09 Caps, Bryan Murray's 1985-86 squad and the Caps' Presidents' Trophy team to make it to the Finals? Suffice it to say, Olie Kolzig - who already led the '98 playoffs in shots-faced by a wide margin - would've been even busier... and probably would've needed to be even better than his League-best .941 tourney save percentage would indicate he was.

To determine our field of entrants, we listed each of the 38 Caps regular seasons by the teams' points percentages, crudely leveling the ice by removing points "earned" in overtime losses and treating shootout results (wins and losses) as one-point ties. Additionally, for years in which there was a mid-season coaching change that resulted in a decent number of games for the replacement coach, we considered the new guy's record only (welcome to the dance, Boudreau's 2007-08 team; not quite good enough, Dale Hunter's 2011-12 crew... if there are to be any Braden Holtby heroics in this tournament, it'll be for Adam Oates's 2013 squad).

What's left is sixteen teams with an average of forty-four "real" wins and more than ninety-eight "real" standings points per eighty-two games. They also combine for eleven first round playoff exits and a staggering one second-round series win (although interestingly, there are as many teams with first-round wins that didn't make the top-16 as teams that did - five... which perhaps says something about the predictive value of the regular season.)

The bracket is set, then, with the top seed facing the sixteenth seed, two vs. fifteen, and so on (rules of engagement: higher seed gets home-ice advantage and referees from their year). Below is a look at the first two first-round match-ups, with another pair revealed each of the next three Fridays. Let us know with your votes and your comments who wins, and stay tuned for Round 2.

The tourney's top seed is the 1985-86 team that won fifty games (the only squad in club history to do so without the benefit of the shootout) on the strength of great defense and solid goaltending, evidenced by the League's second-fewest goals-allowed. Lead by future Hall-of-Fame blueliners Rod Langway, Scott Stevens and Larry Murphy on the back-end and 30-goal scorers Dave Christian (41), Mike Gartner (35), Alan Haworth (34) and Craig Laughlin (30) as well as Bengt Gustafsson, Bobby Gould, Gaetan Duchesne and others up front, the team racked up a then-franchise best 107 points but finished second in the Patrick Division to the Flyers.

Fortune broke their way, however, as the Flyers were upset by the Rangers in the first round, setting the Caps up for a second-round date with the Blueshirts after they'd swept the Isles. In fact, the Caps entered Round 2 with 20-plus regular season points on every team remaining in the Wales Conference, and 29 on the Blueshirts. Washington would drop Game 1 in overtime, then rebound with convincing 8-1 and 6-3 wins... before dropping three straight and hitting the links, which was particularly unfortunate given that the Caps had at least 18 regular season points on each team that ended up in the Campbell Conference Finals as well. The 1985-86 team was not only among the Caps' best, but that spring also likely represented the franchise's clearest path to a championship. Alas...

The last team to make the tourney (edging out the previous season's squad) is Jim Schoenfeld's lone entry into the tournament, the 1995-96 Caps, which boasted Vezina-winner Jim Carey, a 52-goal-scoring Peter Bondra, 115 assists from its top-two pivots in Michal Pivonka and Joé Juneau and... well, not a ton more. After Bondra, the Caps only had one other skater who topped 18 goals (Steve Konowalchuk with 23) in a season that featured 117 20-goal scorers League-wide. Where would they be without Carey's 2.26 GAA and 35 wins? Pretty much where they ended up in the playoffs - Carey would post an 0-1/.744/6.19 line (bringing his career post-season mark to 2-5/.816/4.62). And while Olie Kolzig valiantly kept the Caps in the series with a .934 save percentage and 1.94 GAA over five games, even staking them to a 2-0 series lead on the road, it wasn't enough, as the they lost the next four (including a four-overtime gut-punch in Game 4 at home that included a failed Juneau penalty shot attempt and the Petr Nedved game-winner).

This series may be the most interesting of all, and not just because it pits the two teams with the smallest difference in points percentage. No, this is a particularly delightful thought exercise because it lines up the first and most recent Caps playoff teams of the Ovechkin Era.

After Bruce Boudreau took over behind the Caps bench on Thanksgiving 2007, the Caps went on a near-miraculous run to the playoffs, clinching the Southeast Division with the season's last game. Boudreau had unleashed Mike Green and Nicklas Backstrom, gotten the most out of Alex Ovechkin (who would win the Hart, Lindsay, Ross and Richard trophies), somehow coaxed an 11-2-0/1.63/.936 run out of Cristobal Huet in net, and turned Glen Hanlon's losing - and boring - team into one on a meteoric rise, with offense to spare. For that, Boudreau earned himself the Adams Trophy as Coach of the Year (though his job was certainly made easier when George McPhee went out and got Huet, Sergei Fedorov and Matt Cooke).

Winning the Division earned the Caps home-ice advantage against sixth-seeded Philly in the first round, despite the Flyers' having earned one more point during the regular season. Unfortunately, Huet became human, and perhaps the emotional and physical toll of essentially playing near must-wins for a month before the playoffs even started wore the Caps down. They found themselves in a 3-1 hole before clawing their way back into the series, only to lose in overtime of Game 7 on Verizon Center ice.

Still, 2007-08 was a revelation and unlike anything Caps fans had ever seen before... but it had them dreaming that same dream, and feeling as if it was getting closer. Fast-forward through the next four sometimes literal roller-coaster seasons of change (necessary and otherwise), and the Caps found themselves entering a lockout-shortened season with their third coach in two seasons trying to breathe life back into the team's hopes and its captain's career, and renew the optimism within the fan base that had disappeared somewhere along the way.

Adam Oates's Caps struggled mightily out of the gate, getting off to a 2-8-1 start that included a rocky transition to right wing for Ovechkin. But the team recovered (thanks largely to a positively lethal power-play), and would go on a 25-10-2 run to finish the season and capture the Southeast Division's last title.

The Caps drew the Rangers in the first round of the playoffs and got off to a strong start, holding serve with a pair of home victories before dropping four of the next five games, culminating in an embarrassing 5-0 loss at Verizon Center in Game 7. Still, the emergence of Braden Holtby, a healthy Mike Green, a rejuvenated Alex Ovechkin and the cerebral, communicative Oates give reason to believe that the Caps are back on track going forward.

So which team would win a best-of-seven, 2007-08 or 2012-13, err, 2013? Have the Big Three of Ovechkin, Nicklas Backstrom and Green - gotten better over time? Would McPhee's roster moves over the years pay dividends in a head-to-head match-up?

Two series in, here's a look at our bracket: 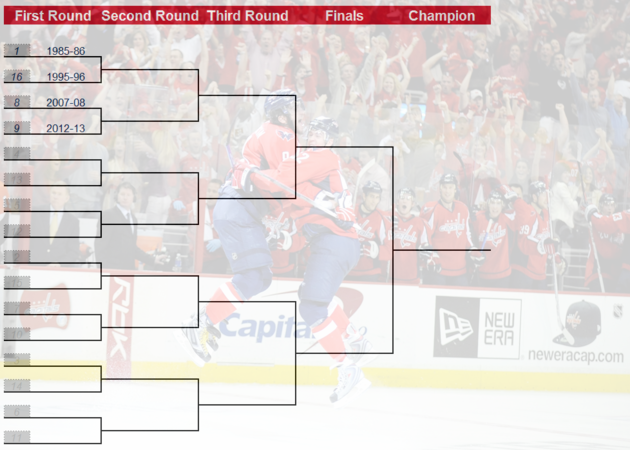