From Alzner to Ward, we're taking a look at and grading the 2013 season for every player who laced 'em up for the Caps for a significant number of games during the campaign, with an eye towards 2013-14. Next up, Jack Hillen. 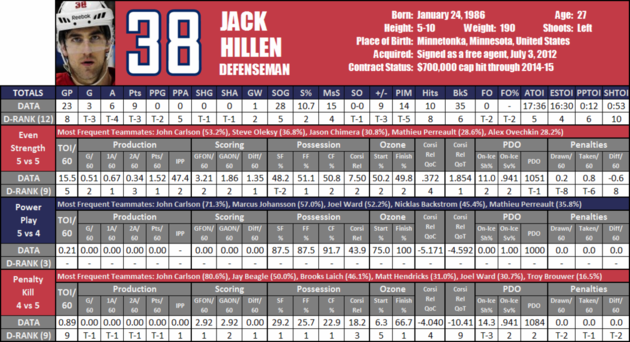 Hillen and his most frequent partners: 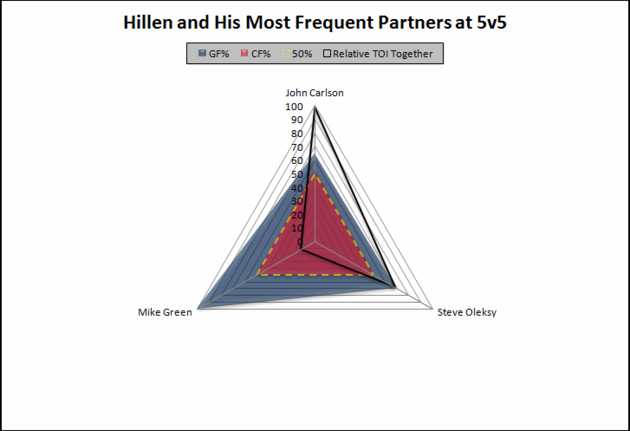 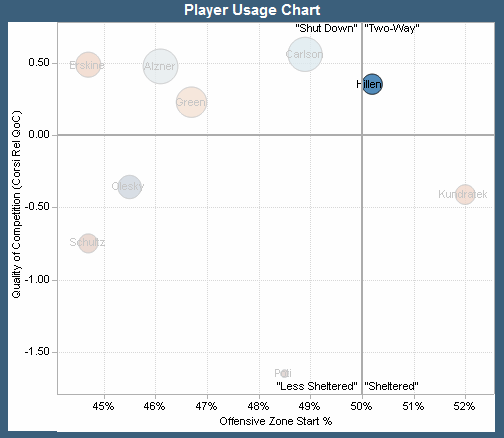 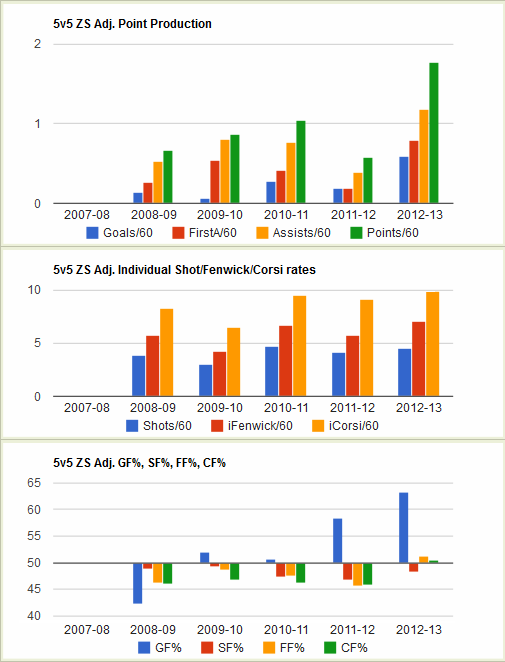 Interesting Stat: Hillen was not on for a single special teams goal this season, despite averaging 1:05 of PP and PK time per game.

The Good: Jack Hillen was signed this past summer by his look-alike, George McPhee, to a one-year, $650K deal, a relatively low-risk move that flew under the radar due to the team's other roster moves and, of course, the looming lockout. Some fans scratched their heads at this signing, wondering why a team with a glut of defensemen needed to acquire one more. But in today’s NHL, what team wouldn’t mind a puck-moving depth defenseman that costs very close to the league minimum?

Considering his low AAV Hillen didn’t disappoint. Supplanting incumbents Jeff Schultz and Tom Poti for the final left defenseman slot, he gave the Caps the effective, puck-moving defenseman they were looking for, while racking up three goals and six assists in his 23 games. His nine points ranked third among Caps defenseman. He averaged 17:36 per game - 16:30 of which came at even strength - and finished a very impressive +9. For a relatively inexpensive signing, those are good boxcar stats.

A more detailed look at his advanced stats bears out a similar story. Hillen’s even strength Fenwick of 51.1% was tops among the defense, as was his points production pace over 60 (1.52) and his Diff/60 (1.35). No matter how you look at it, Hillen was effective when he was on the ice. He was certainly not a liability at evens, a great trait to have for a depth defender. Credit should be given to Adam Oates for using Hillen correctly (i.e., at even strength against weaker competition), but Hillen made the most of his usage.

He also gave the Caps a dimension they hadn’t had in recent years: a bottom pair defenseman who was deft with the puck, able to quicken the pace of the breakout in the defensive zone while bringing the ability to create his own shot in the offensive zone. The latter point shouldn’t be understated; the Caps haven’t consistently had a left-shooting defenseman who could shoot from the point, with many pucks routinely sent back low instead of being shot on net.

The Bad: For starters, Hillen didn’t help much on special teams. Although he was effective when on the PK (see Interesting Stat above) he was pretty much Oates’s last option, racking up a paltry 0:53/game. Similarly, for a puck-moving defenseman he saw very limited time on the power play this season (but that can be easily explained away by the fact that the Caps tend to only use one d-man on the power play).

In addition to limited special teams, Hillen brought no physicality to the Caps. His listed weight of 190 lbs is generous, to the say the least, and Hillen was routinely out-muscled in his own zone. His long-term durability may also be in question. Hillen missed half the season after taking a brutal check from Vincent Lecavalier on opening night.

From an advanced stats viewpoint, Hillen was very protected (0.374 CORSI Rel QoC), routinely paired with good defensemen such as John Carlson (1.854 CORSI Rel QoT), received the second highest number of offensive zone starts for a Caps defenseman (50.2%), and had a PDO of 1051. In other words, he was sheltered, skated easy minutes and benefited from a lot of luck.

And while he did leapfrog Schultz and Poti for that last left defenseman slot available, one can argue that it had more to do with the general lack of talent the Caps had in the bottom half of the defensive roster than due to great play.

Finally, his performance in the playoffs wasn't terribly endearing, as he only notched one assist, took three minors and finished -4. Still, Hillen did enough in the regular season to warrant a 2 year, $1.4M extension this past April. So he’s sticking around.

The Discussion: How much of Hillen's performance is "luck" and how much of it is sustainable? Should he play more special teams next season? What would it take for him to earn a "10"?