What Happened to Jeff Schultz?

Share All sharing options for: What Happened to Jeff Schultz?

[Ed. note: The following comes to us via our good buddy D'ohboy.]

As was reported last week (first by Brian McNally at the DC Examiner) and later confirmed by the team, Capitals defenseman Jeff Schultz has requested a trade from the team via his agent. According to published interviews, Schultz has enjoyed his time in the District, but he'd rather play elsewhere than be a healthy scratch for the Caps. Perhaps not coincidentally, both fans and members of the media have speculated that the Caps might choose to use one of their two "compliance buyouts" on Schultz, given the wide gap between his on-ice production (negligible in 2013) and his salary-cap hit ($2.75M via Capgeek).

All this begs the question: What the hell happened to Schultz? This site was, for a long time, one of the few places that actually had good things to say about Jeff Schultz. Sure, Sarge didn't hit or score, but when he was playing well, he kept the opposition from scoring, and isn't that what a defenseman is supposed to do? As J.P. noted all the way back in 2007:

...Schultz is reminiscent of a football guard or tackle in that when he's playing at his best, he doesn't stand out. It's when he's doing something wrong - a shockingly rare occurrence in his rookie season last year - that he gets noticed.

Unfortunately, what was a "shockingly rare occurrence" from 06-07 through 09-10 became an unsettlingly regular occurrence from the 09-10 playoffs forward. Below are Schultz's NHL boxcar stats from his player page:

These numbers paint a pretty depressing picture. Schultz went from being a steady defensive defenseman on the Go-Go Boudreau Capitals to being at best a non-factor after 2010-11. Consider this: even setting aside his ludicrous 09-10 season, his 07-08 season (during which he turned all of 22 in February) Schultz put up eighteen points, which, although not impressive by itself, is still four more points than Karl Alzner has ever scored in a season. Schultz's five goals that season equal Alzner's career total.

Admittedly, nobody is looking to either Alzner or Schultz for scoring, but it's indicative of the fact that at one time Schultz was a steady defensive-defenseman who also chipped in a bit offensively. (It's also an indicator that Alzner hasn't necessarily developed as Caps fans might have hoped - even a defense-first defenseman should tally more than a handful of secondary assists in a season - but that's neither here nor there right now.)

Moreover, while plus/minus is a flawed stat, Schultz's +86 from 2006 through 2011 is pretty impressive, and indicates that over most of those five seasons, the Caps generally out-scored their opponents when Sarge was on the ice at even strength.

What about his advanced stats? The following come via Behind the Net and Hockey Analysis:

And here's Schultz over time in some key 5v5 metrics: 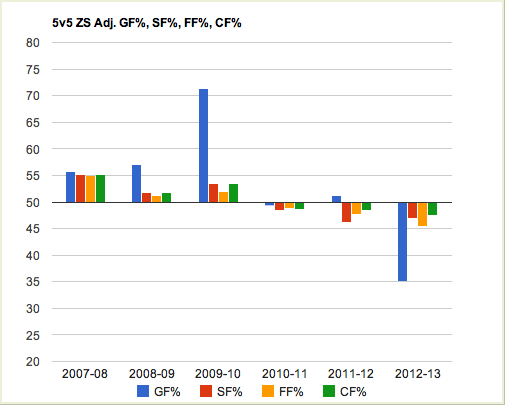 Looking at that data-dump, a few things become clear:

1. Schultz's performance, both in standard and advanced statistics, dropped off pretty steeply in 2010-2011. It's likely not coincidence that this is the year when, in response to a serious losing streak and in a delayed reaction to the previous year's playoff defeat, Bruce Boudreau implemented a much more conservative neutral-zone trap defensive system mid-season. As has been documented elsewhere, that's when the Caps went from being a dominant possession team to being a middling (at best) possession team.

2. Not surprisingly, Schultz doesn't impact possession stats by himself at even strength. When the Caps are up, he's up with them, and when they're down, he's down too. (It would be interesting to see his advanced stats in 06-07, when he had a positive plus/minus but the team was negative overall. Unfortunately, neither Behindthenet, nor Stats.HockeyAnalysis goes back that far.) Further to that point, this: 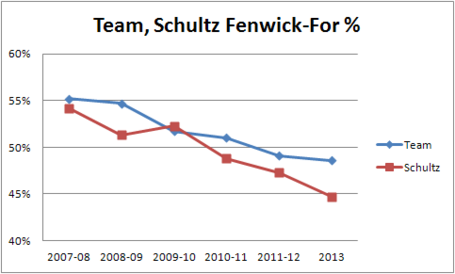 3. Whatever negatively affected Schultz's play at even strength in 2010-2011 also impacted his play on the penalty kill. The Caps gave up fewer goals at 4v5 when Schultz was on the ice from 2007-2008 through 2010-2011, regardless of his on-ice save percentage (which varied widely). After 2011, however, Schultz's shorthanded performance tanked, with the Caps surrendering more shot attempts and goals-against with Schultz on the ice, particularly in 2011-2012. (His improved Corsi rating in 2012-2013 may be an aberration, as his time-on-ice shorthanded was limited under Adam Oates.)

Clearly something happened to Jeff Schultz sometime during the 2010-2011 season. Most defensemen, and particularly very tall defensemen, take a while to develop their skills. Tall, gawky players like Jeff Schultz take a while to grow into their bodies and become fluid - Zdeno Chara, for example. Paradoxically, Schultz was a better player at 22 than he is at 27. He should be in his prime, and yet he's been passed on the depth chart by Jack Hillen and John Erskine and, at least in the case of the former, not undeservedly so.

But why did this happen? How did Schultz regress so badly when he should have been having the best seasons of his career?

1. Was Schultz a mediocre or even poor player who looked good on a team that was systemically playing over its head (i.e., getting "lucky") from 2007 through 2010?

2. Was he a decent player whose deficiencies were masked by his teammates or the system he played under Boudreau? In other words, did playing primarily alongside Mike Green when he was having two of the best offensive seasons by a defenseman in the last 20 years make Schultz look like a much better player than he really was? Or did Boudreau's system somehow mask his deficiencies in footspeed and puck movement?

4. Was he a good player who suddenly lost all confidence? Is there still something salvageable within Schultz?

From looking at his advanced statistics, I think it's a mix of #2 and #4, excepting 2009-2010, in which both the team and Schultz individually played way over their heads. You can clearly see Schultz's stats plummet in 2010-2011, which is right about the time that Boudreau started fiddling with his systems play. Schultz had been playing in pretty much the same system since he turned pro with the Hershey Bears in the 2005-2006 AHL playoffs. Suddenly, in the middle of the 2010-2011 season, he was supposed to do something different when Boudreau shifted the defensive-zone coverage and implemented the trap. And then another different thing when Boudreau tried to implement a "hybrid" system in 2011-2012. And then another when Dale Hunter took over and installed an aggressive man-to-man system. And then another when Hunter realized that the man-to-man wasn't working and installed a more passive system that emphasized shot-blocking. And then another when Oates and Calle Johansson installed a more aggressive "overload" defensive zone system that also emphasized moving the puck quickly north-south, whereas Boudreau's and Hunter's systems did not.

Jeff Schultz doesn't strike me as someone who does anything suddenly. My guess is that all the rapid-fire changes of system took him out of his comfort zone. Instead of being able to "read and react" or "read and anticipate," Schultz now had to "read, think, think some more, and then react." For a player as... ponderous as Schultz, that extra couple of beats spent thinking probably meant the difference between being an effective NHL player and a healthy scratch. He simply doesn't move quickly enough to be able to think on his feet.

As his play deteriorated, his confidence waned, which probably further hurt his play. Schultz went from consistently being a steady backstop for offensive defensemen like Mike Green and Dennis Wideman to being paired with Tomas Kundratek, Tom Poti, and Steve Oleksy on the third pairing. Couple his issues adjusting to new systems with a near-total inability to move the puck up-ice quickly (which is key in Oates' system), and it's not hard to see how guys like Oleksy and Hillen jumped over him on the depth chart.

What's curious is that Schultz was passed so readily by John Erskine under Oates. Like Schultz, Erskine is not what you'd call "agile," or "mobile," but he is what you'd call "hostile." He's also what you might call "lucky," particularly when compared to Schultz in 2012-2013. Take a look at the five defensemen who have been with the team over the past four seasons (all stats at five-on-five, click to enlarge): 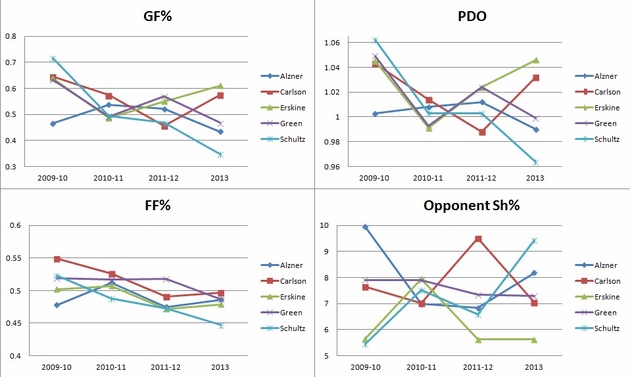 Looking at this chart, it's not clear that the Caps made the right choice in re-signing Erskine, while essentially making it clear that Schultz is no longer in their future plans. Pugilistic skills aside, the data above suggests that both Schultz and Erskine are due for regressions to their career means. In the case of Schultz, that's a good thing, but in the case of Erskine...

Anyway, the bottom line here is that Schultz's play has dropped off dramatically over the past couple of years (as has the team's, in many ways), but so has his "puck luck." Taken together, it's not at all surprising that this is what we've seen... 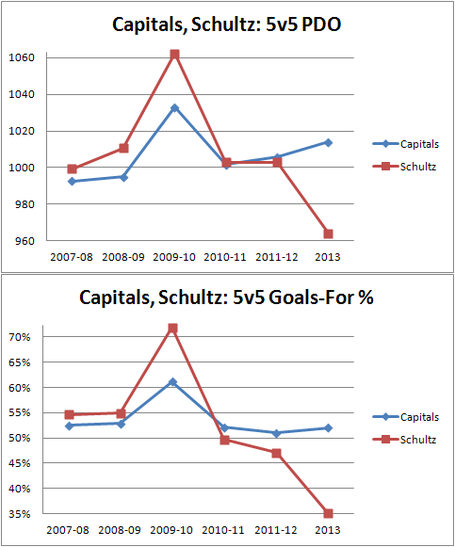 ... and how we've gotten to where we are, with a still-young former first-round pick wanting out, and the team likely happy to try to make that happen.