From Alzner to Ward, we're taking a look at and grading the 2013 season for every player who laced 'em up for the Caps for a significant number of games during the campaign, with an eye towards 2013-14. Next up, Matt Hendricks. 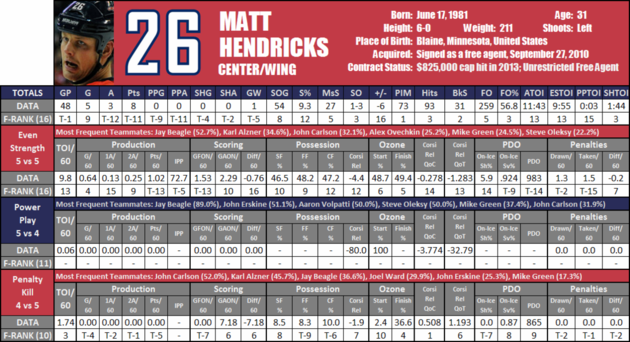 Hendricks and his most frequent linemates: 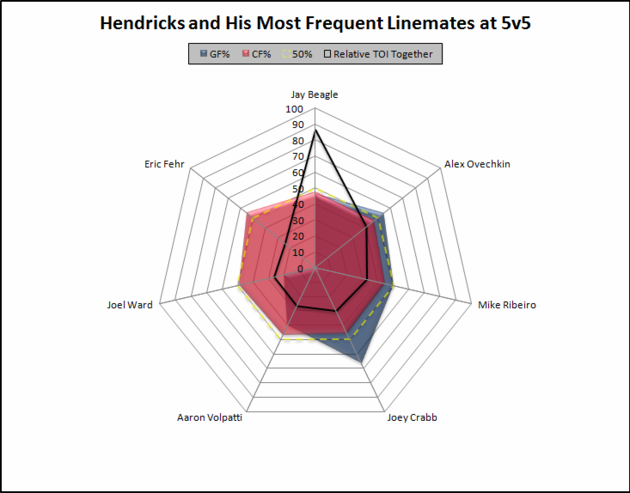 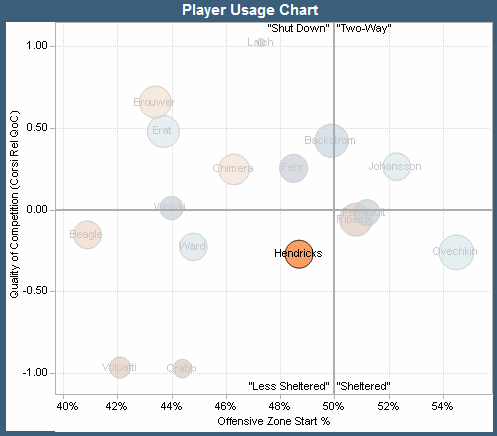 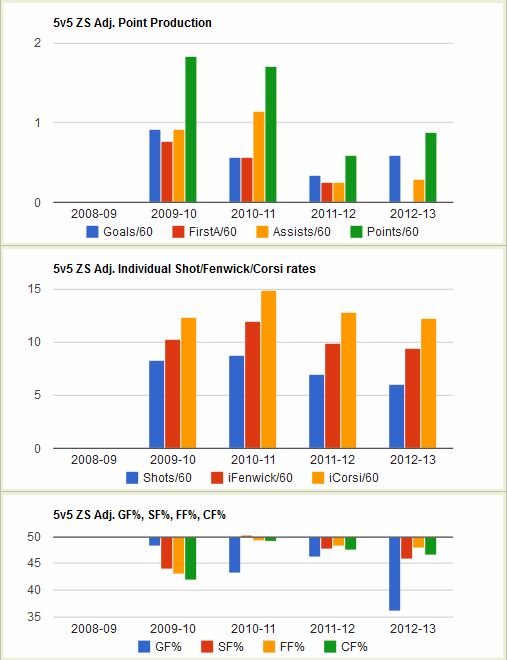 Key Stat: No Cap spent more time in the penalty box than Matt Hendricks this year. His 73 PIM were 20 more than the next highest on the team. And while this number is inflated a bit by his seven fighting majors (no teammate topped three), he still committed penalties at the highest rate on the team at five-on-five (tied with Jason Chimera).

Interesting Stat: Hendricks took 259 faceoffs on the year, good for more than five per game, and slaughtering his previous career high of 3.4 faceoffs per game (when he took 265 draws in 78 games in 2011-2012). Adam Oates was dropping the bent-nosed grinder into the dots for good reason - Hendricks won nearly 57% of his draws on the year, which was good enough for third best on the squad overall, and his 60% efficiency in the defensive zone was tops on the team among those with more than 40 draws there (tied with Mathieu Perreault).

The Good: Hendricks did in 2013 what he has always done: stuck his nose in the scrums, tangled with considerably bigger-bodied forwards in front of his own net, dropped the gloves when his team needed a spark, and left everything out on the ice, night in and night out. Hendy was first on the team in penalty minutes, second among forwards with 31 blocked shots, and third on the team in hits (credited with 93). While these numbers can often be misleading, in the case of The Wagon, they seem to reinforce the hard-nosed, grit-first, heart-and-soul aura that he’s created for himself in three years in the Nation’s Capital.

Balancing his penchant for the penalty box was Matt Hendricks ability to draw penalties, as he averaged 1.3 penalties drawn per 60 minutes of ice time - only Alex Ovechkin (1.5) was better. And for a power play that spent the better part of the season at the top of the charts, getting a stick caught in your blade was as fine an offensive contribution as could be expected from the fourth line.

The Bad: While penalty killing is always a commendable responsibility, it’s tough to view the PKers as being particularly noble when the unit clocked in at a feeble 77.6% success rate. Only the Carolina Hurricanes, Nashville Predators, and Florida Panthers were worse. Hendricks was Washington’s second most-utilized forward on the penalty kill, and was on the ice for a pretty rough 7.18 GAON/60.

At even-strength, Hendricks had the worst scoring differential rate among the forwards, being on the ice for three-quarters of a goal more against than for for every sixty minutes of ice time, and his possession numbers were all negative (in not-as-unfavorable-zone-starts as you might think). Last year, Hendricks created a mystique for himself with his surprisingly devastating shootout prowess, earning him a nod in shootouts alongside the likes Alex Ovechkin and Nicklas Backstrom. This year, Hendricks potted one in three chances.

The reality is Matt Hendricks possesses many desirable qualities, but he, just like the much-loved Matt Bradley was before him, is far from a unique player with a tough-to-replace skill-set, especially if those skills are in decline. And while by all accounts he’s a tremendous locker room guy with a role model work ethic, it may be hard to see those things as having enough on-ice impact to make the unrestricted free agent to-be a "must keep" for the team.

The Discussion: The discussion: Will Hendricks be back in 2013-2014? If so, what kind of money does he command, and how much is too much? If Hendricks does end up in a different sweater, what will he be remembered for during his three years in Washington?