The Caps draft a blueliner in Round 2...

With the 53rd pick in the 2013 NHL Entry Draft, the Caps have selected Madison Bowey. Some thoughts:

Bowey is a gifted defenseman with a lot of upside. He still has a few kinks in his game, but there are some scouts who rave about him. He is a quality skater, if not high end, with a powerful stride, good balance, four-way bursts, and above-average top speed that enables him to close gaps quickly. He shows a willingness to engage, that along with a solid strength level, can help him erase checks off of pucks effectively. He also makes plays as a stick checker. Bowey has very good ability as a puck mover, whether he is rushing the puck out of his own zone, or moving it around on the power play. When he is on his game, his offensive hockey sense can be sterling. He has what one scout describes as a heavy shot from the blue line, adding to his multi-dimensional offensive ability. However, scouts have concerns about his defensive play, particularly in his risky decision-making—he sometimes gambles ineffectively when deciding to pinch or rush. His defensive zone play is not bad, but he is inconsistent with his positioning. Still, it is important to note that he did improve on that skill in the second half of this season. - Hockey Prospectus 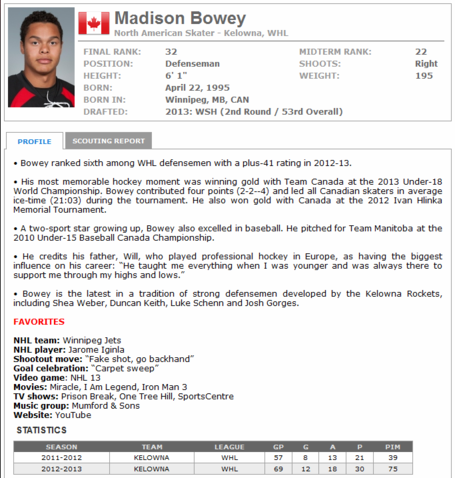