From Alzner to Ward, we're taking a look at and grading the 2013 season for every player who laced 'em up for the Caps for a significant number of games during the campaign, with an eye towards 2013-14. Next up, Aaron Volpatti.

Japers' Rink Player Card (click for hi-res version; a glossary of terms used in this post can be found here; data via Behind the Net, Hockey Analysis, CapGeek and NHL.com; half of the stats were accumulated with the Vancouver Canucks, but rate stats are ranked against Caps. H/t Habs EOTP): 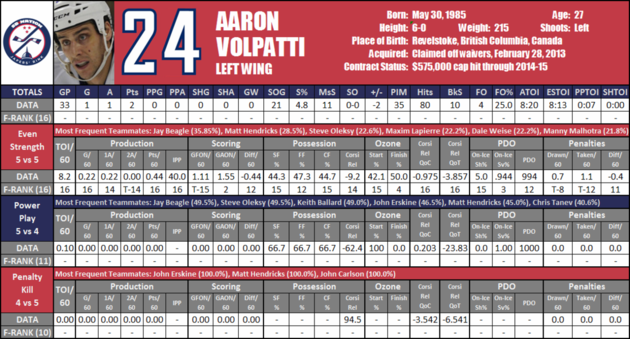 Volpatti and his most frequent linemates: 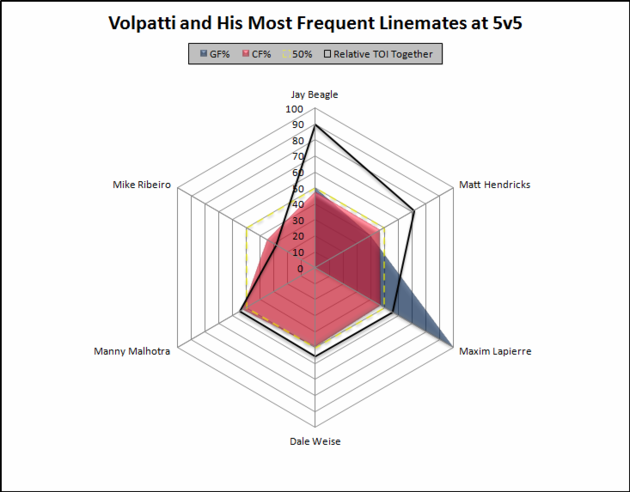 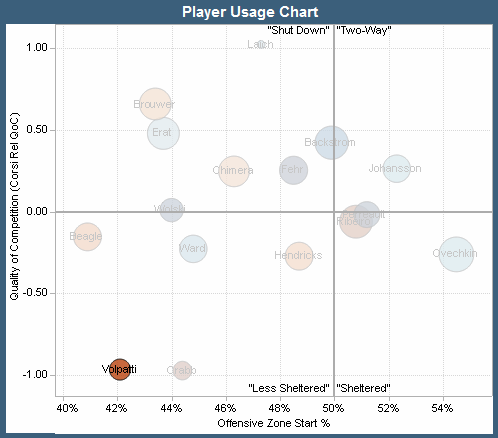 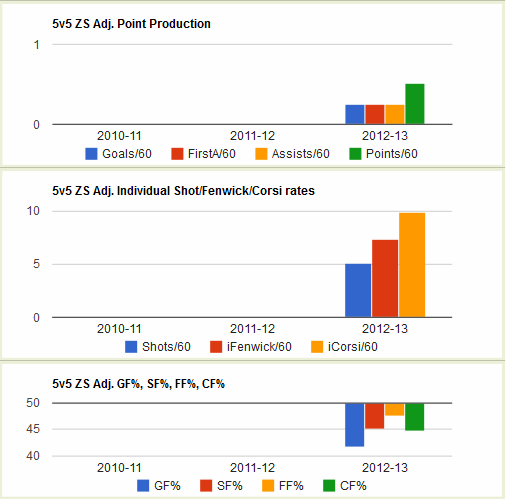 Key Stat: Volpatti had more than ten minutes of ice time in a single game seven times this season (six with the Caps); prior to this year he'd done so only ten times total in fifty-four games.

Interesting Stat: Despite the fact that it was a lockout-shortened season, Volpatti set a new career-high in games played in a single season with 33 (16 with the Canucks, 17 in Washington).

The Good: After being picked up on waivers at the end of February, Volpatti joined the ever-rotating crew of complementary pieces at the Caps' disposal, rotating into the lineup as a gritty third- and fourth-liner (and in one interesting experiment, a top-line winger alongside Alex Ovechkin and Nicklas Backstrom).

While in Vancouver Volpatti had been known for his feistiness - most notably in his willingness to drop the gloves - and for his defensive ability. One ill-fated and ill-advised attempt at the former aside, his skills at the latter were put to use by Adam Oates - and he did fairly well in that role for the Caps. Volpatti started roughly 42% of his shifts in the offensive zone, second-lowest behind only Jay Beagle, but finished 50% of them there. Not only was that the fifth-best offensive zone finish percentage on the team, but it was also the best differential between zone starts and finishes on the team by far. On average players will usually regress half of the way to 50%, so it's not surprising that he finished shifts in the offensive zone more often than he started - but the expectation would have been closer to 45-46%, a mark which he far exceeded.

When he did find himself in the defensive zone, Volpatti did a pretty decent job, on the ice for just five goals-against for the second-lowest GA ON/60 at even strength. He didn't make as much of a splash at the other end of the rink, of course, but he did provide some energy while also exercising restraint; in prior seasons and even earlier this season with Vancouver he had developed a reputation not only for dropping the gloves fairly regularly (with four fights on the season before arriving in DC) but for taking penalties at a higher rate than he drew them. In his 17 games with the Caps this year, however, he was much less of a liability, with just the one aforementioned bout in his Caps' debut and only one minor penalty.

And sure, the Caps didn't pick up Volpatti for his offensive contributions... but if you're only going to get one assist, this is a pretty good way to do it.

The Bad: For all of his ability to finish shifts in the opponent's zone, Volpatti's time in his own end wasn't exactly a beacon of strong possession, as his GF%, SF%, C% and F% all suffered and were among the worst on the team (although that's somewhat to be expected considering the rate at which he started in his own zone). And while he showed himself to be moderately skilled at defensive play, he wasn't used on the penalty kill at all (for the Caps or for Vancouver) and has exactly 31 seconds - total - of shorthanded ice time in his career. Whether that's because it's a role in which he wouldn't excel or because he simply hasn't been given the chance yet is unclear, as he only has parts of three seasons under his belt, but limited cap space tends to favor multi-dimensional players and right now he's only got one dimension.

And while it's true that Volpatti's skill set and his usage aren't exactly conducive to offense, picking up just one assist in 17 games - to go with his one goal in the 16 games prior with Vancouver - isn't nearly enough secondary (tertiary?) scoring for a team that at times struggles to get offense from multiple lines. His lone point came four games into his tenure with the Caps, and in his first eight games with the team he generated just one shot on goal, the first of only 10 he put on net in a Caps sweater.

Without adding any offense there's not a whole lot there to separate Volpatti from the pack of gritty fourth-liners currently on the Caps' roster (especially when all of them outscored him by a healthy margin and most of them have spent significant time on the penalty kill) - and it's a big reason why, when the playoffs got underway, Volpatti was watching from the stands.

The Discussion: After a solid 17-game stint to end the regular season, the Caps inked Volpatti to a two-year contract extension last month - with the salary cap going down this summer, does Volpatti's new deal essentially put an end to the Matt Hendricks era in DC? If that's the case, would you expect him to at least get a tryout on the penalty kill to fill the void? Is there room for Volpatti to earn a regular roster spot next year or do you see him as being more of a press-box dweller and injury substitute? Finally, what would it take for him to earn a '10' next year?