From Alzner to Ward, we're taking a look at and grading the 2013 season for every player who laced 'em up for the Caps for a significant number of games during the campaign, with an eye towards 2013-14. Next up, Mathieu Perreault. 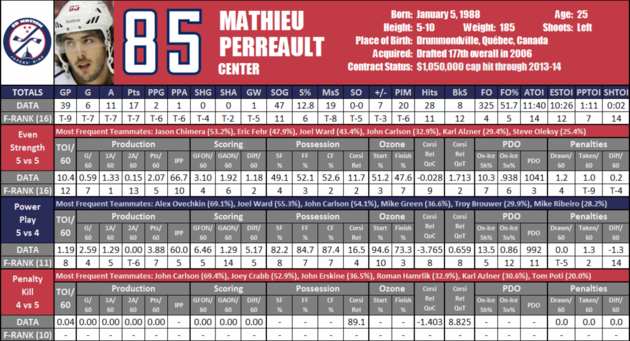 Perreault and his most frequent linemates: 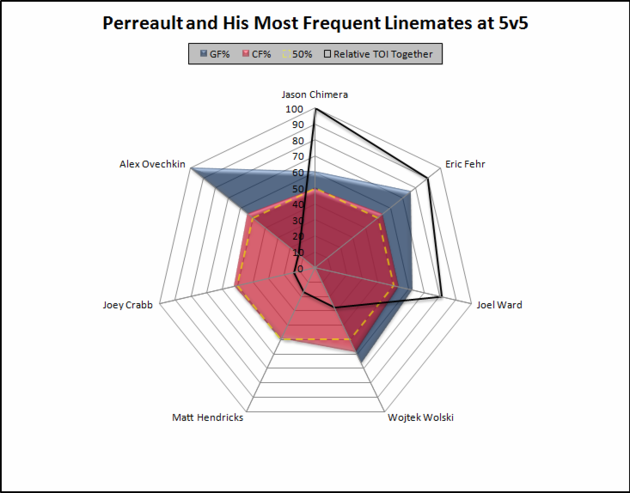 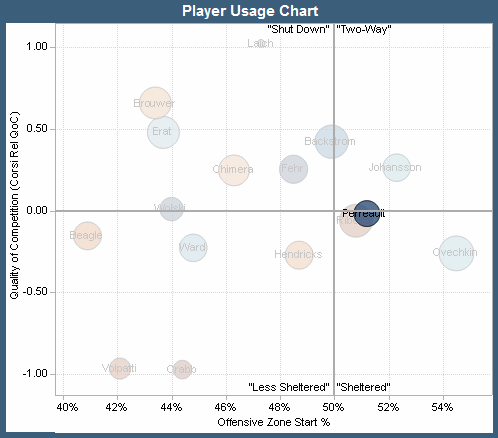 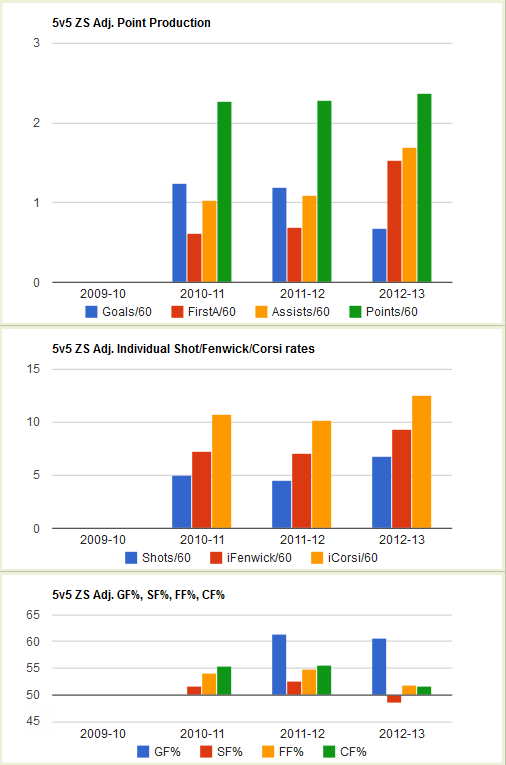 Key Stat: Perreault led the Caps in primary assists per sixty at five-on-five and finished third in overall assist rate (behind a pair of Swedes who skated predominantly with the League's MVP).

Interesting Stat: Perreault was credited with just seven giveaways, tied for second-lowest (with Joel Ward) among all Caps forwards who played at least half the season.

Wolski, Perreault and a Look Into Adam Oates's Thought Process 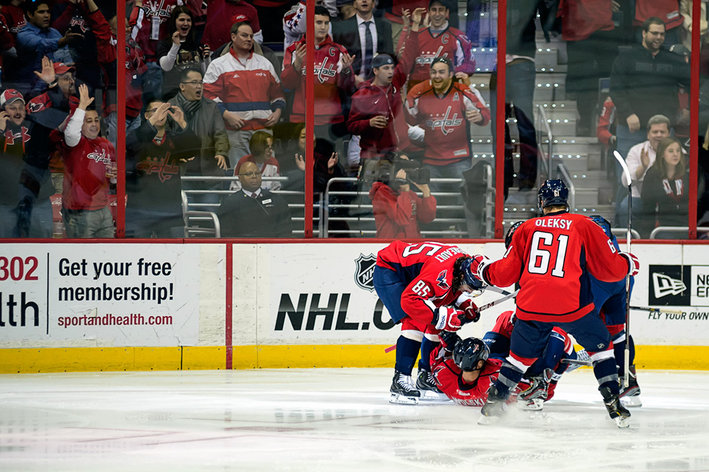 A couple of healthy scratches in mid-March raised an eyebrow or two among Caps fans, and may provide some insight into Adam Oates's decision-making (Photo by Clyde Caplan/clydeorama.com

The Good: Mathieu Perreault's time in the NHL so far has been one marked by flashes of brilliance and bouts of inconsistency, solid defensive play mixed with occasionally poor decision-making, time spent in his coaches' good graces and plenty of trips to the doghouse. This year was no different for Perreault, with a new coach, new system (to say nothing of the new expectations that came with both) and a shortened season in which to work.

While his surface-level offensive numbers in the regular season weren't much to write home about, they were well in line with his role as a third-/fourth-line center - and didn't necessarily tell the whole story, either. For Perreault, much of the tale is told in the underlying numbers, both offensively and defensively, numbers that show a continued pattern of improvement at both ends of the ice. His individual Fenwick and Corsi ratings rose above last year's level, and no forward on the team had more primary assists per 60 than Perreault; in fact, his assists and points per 60 were all well above where they've been in previous seasons. And at the other end of the ice, his goals-against per 60 was the lowest it's been since his NHL debut back in 2009-10.

It wasn't all "fancy stats", of course - Perreault became a contributor on the team's second power play unit, scoring a third of his goals with the extra man while averaging about a minute of power play time per game. He took the fourth-most faceoffs on the team but finished with wins in 51.7% of them, trailing only Nicklas Backstrom. And few loved home cooking more than Perreault, who brought his A game at Verizon Center. 13 of his 17 points were scored on home ice - the third-highest percentage on the team behind only Jason Chimera and Wojtek Wolski - and he took just three of his ten minor penalties at home (and broke out some of his best celebrations, as well).

If Perreault's regular season suffered from inconsistency and the occasional benching, it was in the playoffs where he developed into one of the team's best and more consistent performers. He had just one goal in the first round series loss to New York but his four points were tied for the most on the team, as was his plus-three rating; he was one of just five Caps to not take a single penalty in the series, and he won 54% of his faceoffs - just 0.6% shy of Backstrom's team-leading mark.

The Bad: It was kind of a strange season for Perreault, as he was one of the team's more consistent producers early in the season only to find himself benched around mid-March for reasons that perhaps only the coach knows. His production was solid early on, but as the season progressed and the playoff race heated up, Perreault's numbers almost went the opposite direction of his teammates - he had ten points through the first half and seven in the second, but there were long stretches in between those points as the season drew to a close.

And while his home numbers were sparkling, the opposite was true outside of DC, with just four points in nineteen road games, a combined minus-two rating and winning just 46.8% of his faceoffs. Matchups and home ice advantage play a role there but for a guy who played relatively sheltered minutes (and entirely at even strength or the power play), one point for every five road games just isn't good enough.

Perreault averaged 1.2 shots per game, which is right about where he usually is, but his shooting percentage was lower than his career average (and while one wouldn't expect him to match the absurd 26.7% rate he posted last year, such a huge dip from one season to the next is a bit of a concern). As a result his offense struggled, with just six goals on the season and a goals-per-60 rate of well under 1 for the first time in three seasons (although he did make up for it with his improved playmaking abilities). And as it did in the regular season, his playoff performance dwindled as the first round drew to a close, with just three shots on goal in the final three games against the Rangers and no points to show for it - despite skating over 16 minutes (the most ice time he had all season) in two of the three games.

The Discussion: Perreault has bounced around the lineup a bit over the years; what do you see as his role going forward, and how much does that change if Mike Ribeiro returns (or the team brings in another second-line center) versus whether the 2C slot is open next year? Are Perreault's skills more suited to a top-six or bottom-six role? Finally, what would it take for him to earn a '10' from you next season?