From Alzner to Ward, we're taking a look at and grading the 2013 season for every player who laced 'em up for the Caps for a significant number of games during the campaign, with an eye towards 2013-14. Next up, Brooks Laich. 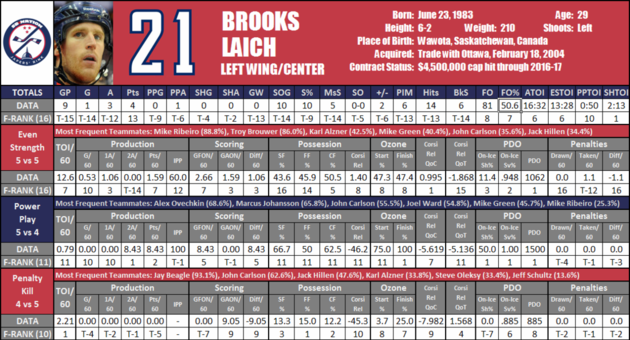 Laich and his most frequent linemates: 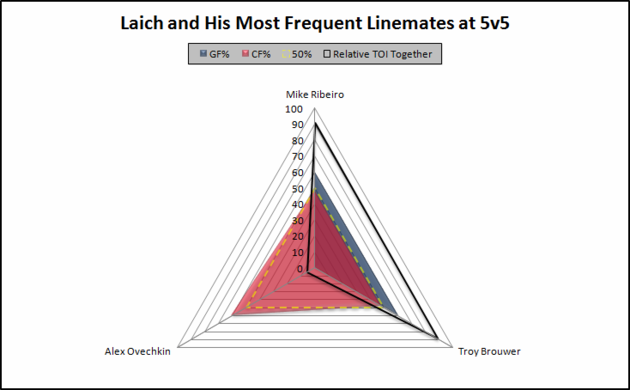 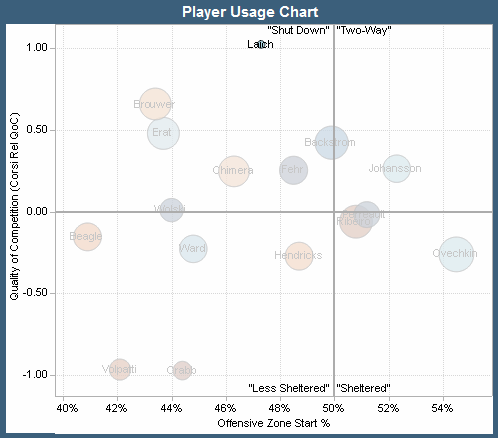 Laich's past six seasons (via Hockey Analysis; note that he played too few minutes in 2013 to have this season included in these charts): 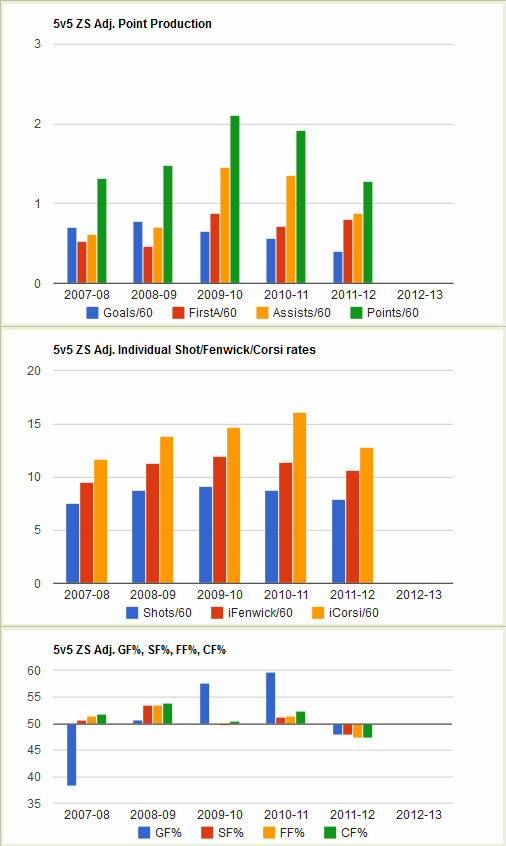 Key Stat: Laich played just nine games this year due to injury, less than 20% of the season - the lowest percentage he's played since making his NHL debut in 2003-04. In fact, he played more than twice as many games for the Flyers during the 2012-13 hockey season than he did for the Caps... the Kloten Flyers, that is.

Interesting Stat: The 1.11 shots per game registered by Laich this season was his second-lowest shot rate of his career.

The Good: The 2013 season was a very uncharacteristic one for Brooks Laich on a number of levels, most notably - and most importantly - due to the fact that an injury sustained during the lockout kept him off the ice for all but nine games this year (all during the regular season).

Despite the fact that he appeared in less than a quarter of the season, Laich was still able to make an impact. Skating alongside Mike Ribeiro and Troy Brouwer for the bulk of his shifts, Laich picked up a goal and three assists on the season, just shy of his career points-per-game rate of 0.50. And while his GF ON/60 was about average among all forwards, he also had the third-lowest GA ON/60 and the third highest differential between the two.

Laich continued to be something of a jack of all trades in his injury-shortened season, logging top-six minutes at even strength and on both special teams. He won 50.6% of the faceoffs he tookThe 2:13 of shorthanded ice time he averaged led all forwards, and while his power play time was well below his usual amount at just under a minute per game, he still managed to pick up one of his four points with the extra man. And although he never seemed to be fully healthy during his nine-game stint, he still played a physical game, with fourteen hits and six blocked shots on the season (although perhaps he's wishing it was only five).

The Bad: There's no question that the absence of Laich hurt the Caps for at least part of the season - particularly because it revealed just how thin the Caps were up front - and definitely hurt them going into the playoffs, where a healthier top six might have given them the edge in any of the one-goal losses they suffered to New York.

But it wasn't just his absence that hurt the team; even when he was "healthy" Laich didn't seem to be 100% and was pulled from the lineup after just nine games back before undergoing what eventually proved to be season-ending surgery. In his brief appearance with the team alongside Troy Brouwer and Mike Ribeiro, he did little to help the black hole of possession that had developed on the second line, with both his SF% and FF% below 50% (although in his defense, he tended to face relatively tough competition).

He managed just one goal in his nine games, likely due in large part to the fact that he simply wasn't shooting as much as usual; Laich averaged just over one shot on goal per game, well below his usual rate, and unsurprisingly scored his only goal of the season during the only game this year in which he registered more than a single shot. (Of course, add in the fact that his power-play time was way down from previous years, and his drop in goal and point rates isn't all that surprising.) And he wasn't all that effective at the other end of the ice, either, as he was on for seven goals-against in his nine games (four of which came on the power play).

The Discussion: After missing just four games in his previous five seasons, are you concerned about the fact that an injury cost him the majority of the 2013 campaign? Where do you see him fitting into the lineup next year, in the top six or in more of a grinder/shutdown role? What would he need to do to earn a '10' next year?