From Alzner to Ward, we're taking a look at and grading the 2013 season for every player who laced 'em up for the Caps for a significant number of games during the campaign, with an eye towards 2013-14. Next up, Tomas Kundratek. 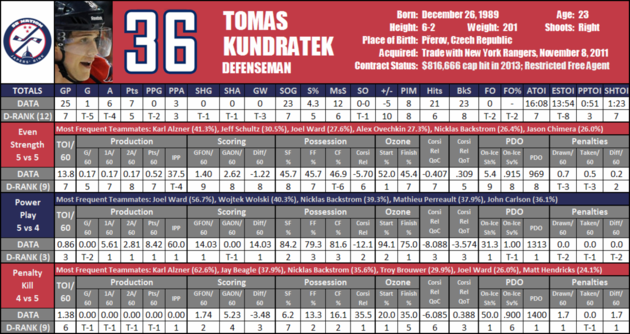 Kundratek and his most frequent partners: 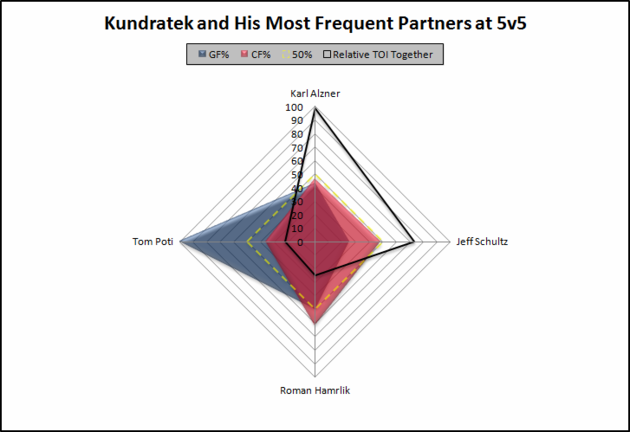 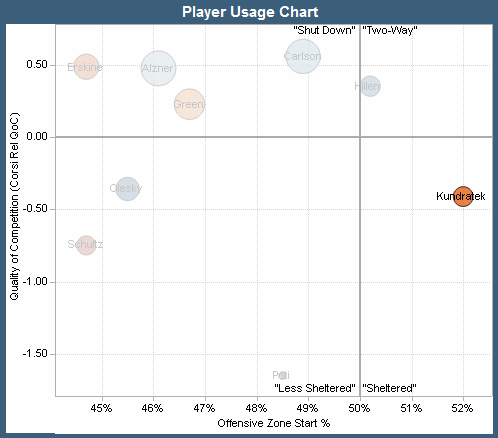 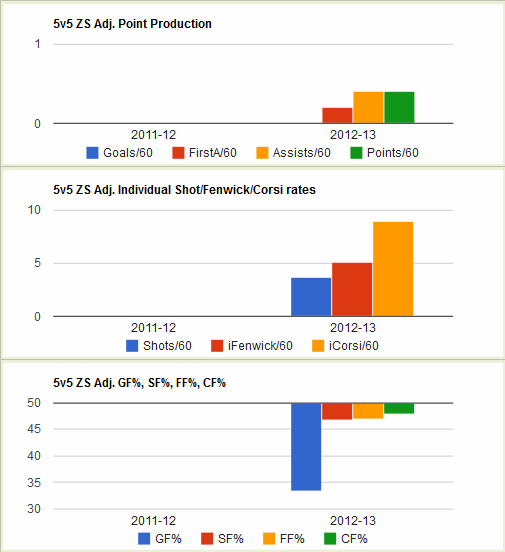 Key Stats: Beginning with the second game of the season, Kundratek dressed 25-straight times up until a mid-March leg injury sidelined him and ended his NHL season (he did play in 13 April and May games for Hershey, including five playoff matches). Over his last five full NHL games, the rookie rearguard averaged 22:01 of ice-time per outing for Adam Oates, nearly twice as much as he received over his first five games of the campaign (11:42).

Interesting Stat: Kundratek finished fifth among Capitals defensemen in points and fourth in goals, despite skating in fewer contests than all of the blueliners that finished ahead of him with the exception of Jack Hillen.

The Good: 2013 marked Kundratek’s first full season in the NHL, the young defenseman appearing in only five contests for the Capitals in 2012 (a cup of coffee in the middle of January during which he posted a blank stat line). Kundratek arrived in Washington to skate with the team in January (and recall that he was one of the few players on the roster early on with whom Oates and Calle Johansson had some real familiarity), but did not receive a sweater on opening night against Tampa. A Hillen injury would open a roster spot for Kundratek the next night, however, and the defenseman was eased in the bottom grouping of blueliners.

Kundratek’s play would pick up noticeably in February, the right-handed shot adjusting to the pace of play in the NHL and using his fine pass first instincts to get the Capitals skating up through neutral and into the offensive zone. The defenseman's five-point February led up to a personal peak in early March in a 4-3 come-from-behind victory over Boston in which Kundratek scored his first NHL goal and added an assist against Tuukka Rask and the eventual Eastern Conference champs. Those two points would be the last of Kundratek’s offensive contributions, however, as the Czech suffered a right leg injury five games later when Jeff Skinner fell on him behind the Caps' net. The defenseman was on pace to finish the lockout shortened season with 13 points (23P pace over 82G), and it's worth noting that half of his six helpers came on the power-play, mostly as a fill-in for Mike Green atop the 1-3-1 formation which he'd played for Oates in Hershey in the fall (though it's worth noting that in Hershey, he frequented the Alex Ovechkin position in that alignment). As a guy who can move the puck either on his stick or via the pass, Kundratek would seem to be a good fit for what this team wants to do going forward.

The Bad: Kundratek was often overmatched physically in his first year of play, the defenseman’s 6’ 1" and 201 lb. frame could benefit from another couple months in the weight room to become a physical presence on crowded NHL ice. Without the extra muscle Kundratek was opposed below the Capitals’ goal line by big bodied forwards and pucks could be more readily shoveled into the slot by the opposition. Despite the disadvantage Kundratek’s skating stride and instincts helped him cover ice in the defensive zone and hustle back to nullify any missed (or overmatched) assignments. As with any young defenseman, time and exposure will be of great importance to Kundratek as he progresses towards full time NHL duty. An additional summer in the gym will be a boon to the young man’s game and help him quash physical deficiencies.

The Discussion: Kundratek is a restricted free agent this summe -, does his 2013 season warrant another couple years of development in a Washington (and/or Hershey) sweater? At what price and term? What do you envision as his role in 2013-14? With whom would you pair him? Finally, what would it take for him to earn a "10" next year?