Failure to Launch: The Caps, The Power Play and Game 3

The power play has been the biggest strength for the Capitals this season - but needing a goal late in Game 3, it came up empty.

Share All sharing options for: Failure to Launch: The Caps, The Power Play and Game 3

Throughout the season the Capitals have had a dominant power play, leading the league with a conversion rate of close to 27%. It's already paid off a couple of times, most notably when Game 2 came to an end with a Mike Green power play goal - a one-timer off of Derek Stepan and past Henrik Lundqvist. Trailing at the end of Game 3, the Caps had a chance to tie the game on the power play. Unfortunately for the Caps, the power play was unable to connect and the Rangers secured their first win in the series.

In Game 2, the Caps were able to get a wide open look from Green (and Alex Ovechkin, really) when two Rangers bit hard on Mike Ribeiro's fake slap shot. As a reminder, this is what it looked like on Saturday when Ribeiro wound up for the big shot. 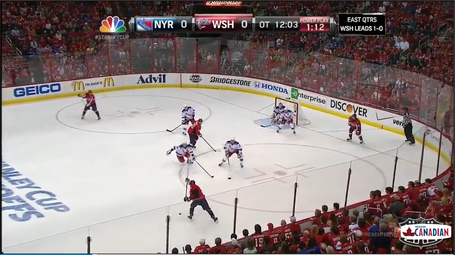 Green is just off screen to the left, but Ribeiro has wide open passing lanes to both Green and Ovechkin. The Rangers completely over-committed to Ribeiro, and the Caps made them pay. On Monday night, the Caps went back to that well, but the Rangers didn't respond. 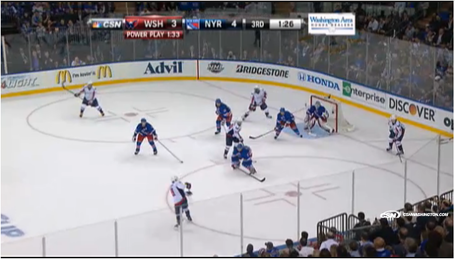 Rather than bite hard on Ribeiro's (first) fake shot, the Rangers sat back and basically dared him to shoot. The formation was essentially the same as what we've seen, but the Rangers chose to stay closer to the net and make Ribeiro beat them with a shot, or a pass through traffic. Not to be deterred, Mike Ribeiro once again wound up for the fake shot. 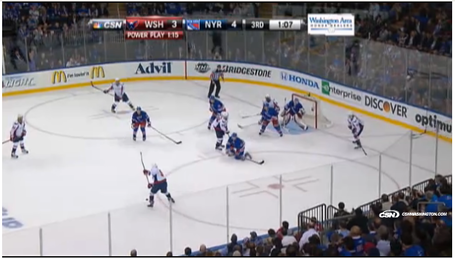 At least this time the Rangers' defender dropped to a knee to block the shot, but the PK kept formation and let Ribeiro have the shot. 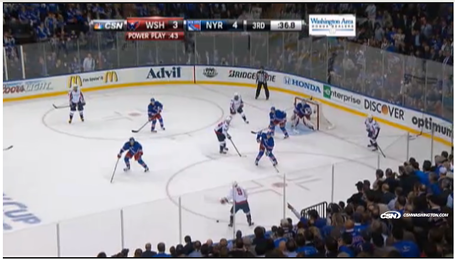 And once again, Ribeiro winds up for a shot on the outside, but the Rangers play the pass. Unlike game 2, the passing lanes to Green and Ovechkin are both covered. The Rangers adjusted from the overtime power play goal, and are going to let Ribeiro wind up from the top of the circles all day long. I don't anticipate seeing a heavy commitment to stopping Ribeiro's slap shot, certainly not at the expense of covering the passing lanes to the Capitals' two most dangerous shooters.

The Caps will have to find another way to set up their shots if the power play is to get back on track; the Rangers PK isn't going to simply give up open looks to Green and Ovechkin. Given the performance over the course of the season, and Adam Oates' commitment to making adjustments, I fully expect the power play to evolve and offer different looks.