From Alzner to Ward, we're taking a look at and grading the 2013 season for every player who laced 'em up for the Caps for a significant number of games during the campaign, with an eye towards 2013-14. Next up, Eric Fehr. 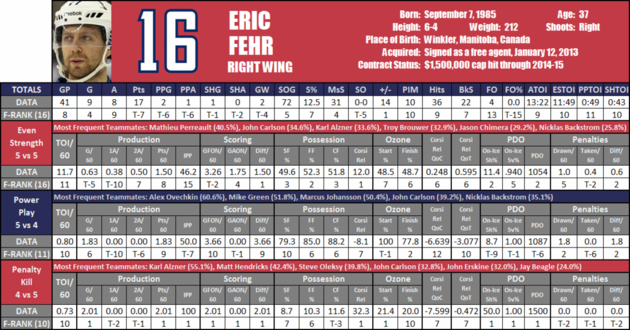 Fehr and his most frequent linemates: 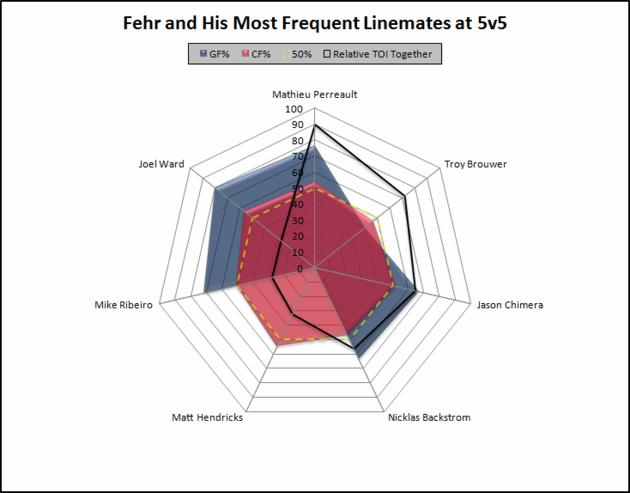 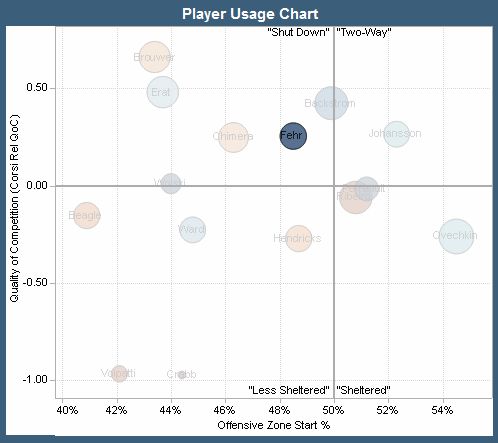 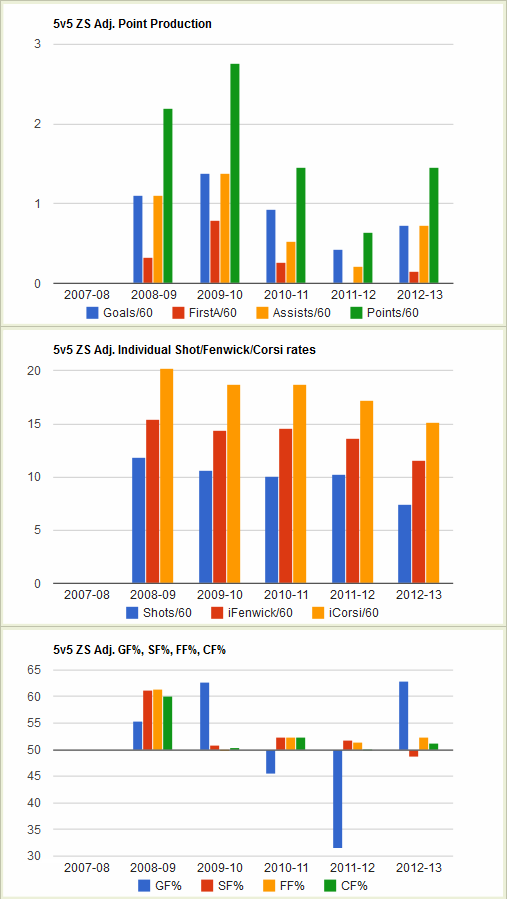 Interesting Stat: Only five forwards (minimum 20 games) had both more even strength time on ice and a higher PDO than Fehr. Of the six players total, Fehr is the only one that did not average at least a minute per game on either special teams unit.

The Good: On a team that didn't have particularly strong possession numbers, Fehr was a positive possession player on-ice and was the best player relative to his forward teammates this year. His 17 points were tied for 9th on the team (Mathieu Perreault), 7th among forwards. In terms of rate production, the numbers look even better. Fehr was among the best Caps forwards in goals-for-on-ice per 60 and goals-against-on-ice per 60. The Caps' early season struggles have been well-documented, but Fehr put up roughly 2/3 of his points in the first half of the season before Alex Ovechkin's scoring, and the team's fortunes, took off. Performing among the team's leaders in rate possession and scoring stats, scoring when the team was struggling, and doing it all on a cheap $600,000 contract? There's a lot to like there.

In addition to the possession numbers, Fehr's third line linemates (Mathieu Perreault and Jason Chimera) saw significantly better Corsi-for% with Fehr than without him (as did the top two defensive pairs). In fact, among players that played at least 85 minutes with Fehr, only Nick Backstrom, Troy Brouwer, and Steve Oleksy did not see better possession numbers with Fehr than without him.

On top of the quantitative data, Fehr showed a flair for the dramatic, as is his wont. On March 5 he came up with a 3 point performance in a come-from-behind victory over the Boston Bruins, including the overtime game winner. Then, on the last game of the season, he ended another game with Boston in overtime. Fehr also seemed to bring a more physical game this year; engaging in the forecheck and driving the net, something many have been expecting to see for some time now. He set a career best with 22 blocked shots on the season and threw the most hits-per-game (.88) in his career, all while managing to stay healthier than he ever has in his career.

The Bad: When Alex Semin left for quicker off-seasons greener pastures, the conventional wisdom was that the Caps would need a bunch of players to step up to off-set the loss of his scoring. Eric Fehr did his part to pitch in on the secondary scoring, but he also filled another void Sasha left behind. With scoring slumps of 8 games, 13 games, and 7 games (in the playoffs), Fehr did a great Semin impression. He scored 8 of his 9 February points in a 4 game streak, all 5 of his March points in the first three games of the month, and 4 of his 5 April points during a 4 game stretch. He's not counted on to score like some others on the team, but it's hard to do so from a hot/cold player.

And despite the solid possession numbers, Fehr seemed to be a bit of a passenger, needing lots of help putting up his 17 points. Among Caps forwards, only Aaron Volpatti joins Fehr with a sub-50% individual points percentage, indicating that his linemates may have been doing a lot of the work. His four most frequent linemates are all in the top 10 for IPP among forwards. Fehr also had a generous PDO (1054), buoyed by a high on-ice save percentage (.940) and a higher on-ice shooting percentage (11.4%).

His numbers were nice for secondary scoring, but it's unlikely his on-ice shooting percentage will remain above 11% at even strength, and if his linemates are creating the offense then another player may be able to produce in that same role. This conclusion is bolstered by the lack of special teams play (and production). While his one power play goal was nice (see above, defeating the Bruins in OT), it's a problem that it was his only PPG on the season. If he's not contributing on special teams, and not driving even strength, there may be a more versatile, and thus more valuable, player that could contribute on the lower lines.

The Discussion: With Fehr entering a fresh 2-year extension, and a crowded group of wings (when healthy), where does Fehr fit going forward? Does his skill set match that of a no-special-teams fourth liner, or can he carve out a spot on the power play or penalty kill? What would it take for him to earn a "10"?