Get to Know the Rangers: The Power Play

In our final installment of the Get to Know the Rangers series, we will examine the New York Rangers Power Play.

Share All sharing options for: Get to Know the Rangers: The Power Play

[Ed. Note: As with the Get to Know the Rangers: The Penalty Kill post, we've reached out to a long time regular in our comments and FanPost sections to help us out. We'd like to thank D'ohboy for taking the time to put together the following breakdown of the New York Rangers Power Play.]

In the final entry of the ongoing "Get to Know the Rangers" series, I’ll discuss the Rangers’ power play.

The title of this entry could just as easily have been "Why is the Rangers’ Power Play so Atrocious?" Given a roster that boasted proven scorers like Rick Nash, Brad Richards, and Marian Gaborik, to go along with a talented supporting cast including Ryan Callahan, Derek Stepan, and Dan Girardi, it would have been fair to assume that the Rangers would have had at least a league-average power play. Although the Rangers improved their final standing to 23rd in the league with a 15.7% conversion rate, they spent much of 2013 near the bottom of the power play rankings. The reason for this underperformance is one part personnel, one part system, and one part "luck."

The first personnel issue with the Rangers’ power play is their centers, specifically their faceoff abilities. While faceoffs can be an overrated statistic, most faceoffs on power plays occur in the offensive zone, and the difference between a controlled faceoff win and a clean loss can be 15-20 seconds of offensive zone time (and that’s provided the team can regain the zone cleanly). Stepan and Richards are first and second on the Rangers in terms of PP faceoffs taken. Richards basically breaks even, winning 48 and losing 49, but Stepan is awful, winning 41 and losing 63. More often than not, the Rangers are forced to retreat to center ice to regroup and re-enter the zone. For what it’s worth, Jay Beagle takes the most PK faceoffs for the Caps, winning 63 and losing 48. In Game 1, the Caps won seven of the 11 draws on Rangers power-plays (and 65% of their 26 defensive-zone faceoffs overall).

But losing faceoffs does not necessarily sink a power play. For example, the Caps have the best power play in the league, but are barely above 50/50 in power play faceoffs. The key to overcoming faceoff losses is regaining the zone quickly, and ideally in full control of the puck. This is another area in which New York’s personnel (and John Tortorella’s usage) is left wanting.

Dan Girardi is an excellent NHL defenseman, but he’s not a great power-play quarterback in the style of Mike Green or P.K. Subban. He’s not terribly comfortable with the puck on his stick, and he’s loathe to break down a neutral-zone scheme with his skating. The instant he rounds the net in his own zone, he’s looking to pass the puck. This allows the PK to hang off of him and take away passing lanes. The end result is that the Rangers rarely regain the zone with clean control. Michael Del Zotto is a much better skater with the puck, but Tortorella doesn’t trust him as much (with good reason), and he’s primarily relegated to the second power play unit (PP2). John Moore’s scouting report suggests that he’s capable of being a puck-mover on the power play, but he gets precious little time with the extra man to prove it. The following clip shows the Rangers’ woes on faceoffs and zone-entries:

Together, the poor faceoff percentage and the inability to regain the zone with control explains why the Rangers were 16th in the NHL in total time spent on the power play (260:22), but only 26th in power play shots (186). To put a finer point on that, the Rangers had the third-fewest shots-per-sixty-minutes at five-on-four during the regular season, and the worst among playoff teams. Teams that spend a lot of their power-play time scrambling to recover the puck and regain the zone typically don’t take a lot of shots. Teams that don’t take a lot of shots don’t get a lot of goals... unless they’re skilled or "lucky." The Rangers’ roster looks skilled on paper, but their luck was bad for much of the season. It improved late, and their PP shooting percentage ended up at 13%, but they still ended up with the lowest five-on-four shooting percentage in the League.

Ah, but good teams generate their own "luck," particularly in the playoffs. On the power play, this is frequently achieved by putting someone right in front of the net to screen the goaltender and pick up rebounds for "garbage goals." Prior to the trade deadline, the Rangers lacked a skill player with a big body (other than Nash) that they could put in front of the net to generate traffic. Putting Nash in front of the net wouldn’t maximize his puck skills and it would increase his risk of injury, so Tortorella tried using Brian Boyle and Taylor Pyatt in that role, but neither has sufficient skill to be a consistent power-play contributor at the NHL level. The Ryane Clowe trade therefore made a lot of sense. Clowe is big, strong, and has a lot of playoff experience screening goalies and picking up the garbage in front of the net (for Caps fans not familiar with Clowe, he’s not unlike a younger, more skilled Mike Knuble). Unfortunately for the Rangers (or fortunately for the Caps), Clowe is out with an undisclosed injury. The Rangers’ current top Power Play unit (PP1) uses either Ryan Callahan or Derick Brassard in that role. Both are scrappy, but neither take up space like Clowe.

Having covered personnel and "luck," we turn now toward systems, and it’s here that the Rangers’ problems gaining and maintaining offensive-zone puck possession are compounded. The Rangers run a fairly conservative 1-2-2, with one man behind the net or near the goaltender (often Callahan), one man at the half-boards (often Nash), one man in the high slot (often one of Stepan, Hagelin, or Brassard), and two men at the point (often Girardi and either Richards or Stepan). (I tried putting specific Ranger players to each of these positions, but Tortorella has been switching up a lot of things prior to the playoffs). Many teams run such a system and can do well with it. What makes the Rangers’ power play so ineffective is how conservatively they run this system. The Rangers frequently have their defensemen right on the blue line, and their players on the half-boards and high slot are usually up around the faceoff circles. As a result, the Rags spend a lot of time passing the puck around the perimeter, and precious little time creating odd-man chances down low where they’re most dangerous. The following clip demonstrates this clearly:

Here’s a screen capture from that clip that illustrates just how high the Rangers are in the zone: 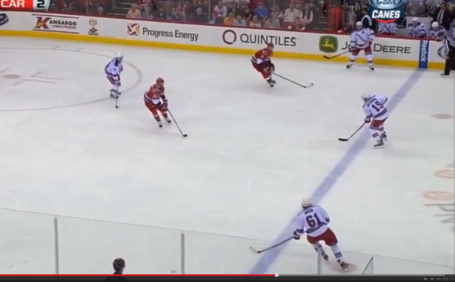 Four out of five players are at the tops of the faceoff circles or above. While this is a static image of a dynamic event, much of the power play was like this. Even when the Rangers score a goal, as in the following clip, they’re often high in the zone: 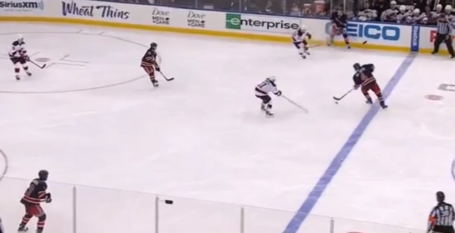 Again, four players all above the faceoff circles. True, the Rangers work the puck low to Callahan and he scores, but if Brodeur doesn’t forget that it’s 2013 and not 2003 and attempt an ill-advised poke check, this is likely not a goal.

In conclusion, the Rangers’ power play is poor because they lose faceoffs, have difficulty regaining the zone, play too high in the offensive zone, and don’t generate effective traffic. Caps fans should be somewhat concerned that Tortorella can make some tweaks that would boost them from bad to mediocre, as some of the systems play is fixable, and the personnel choices (such as Girardi on the point) are easily changed. But in Game 1, things played out precisely as one would have predicted. If they continue to, the Caps won't have all that much to worry about when dealing with the Rangers' power play.