From Alzner to Ward, we're taking a look at and grading the 2013 season for every player who laced 'em up for the Caps for a significant number of games during the campaign, with an eye towards 2013-14. Next up, Jason Chimera. 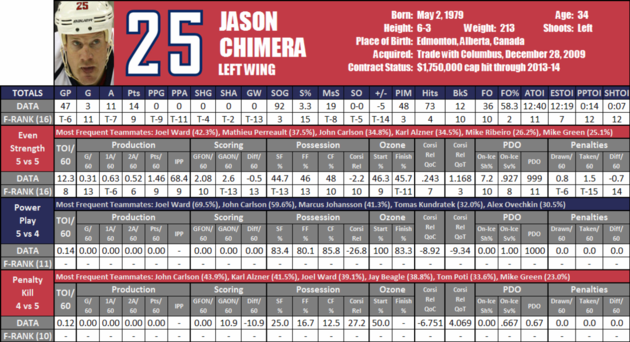 Chimera and his most frequent linemates: 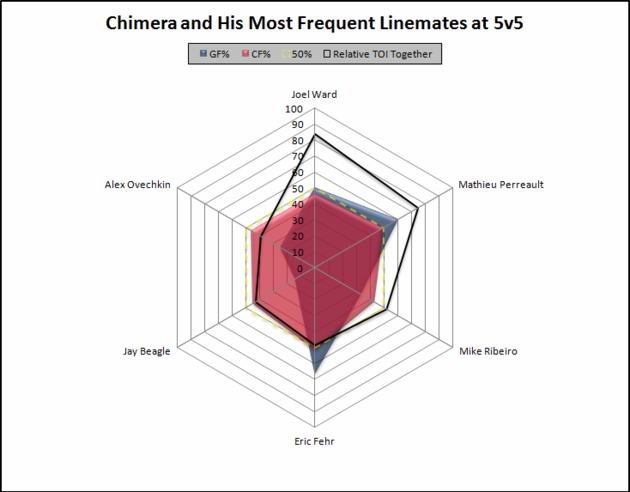 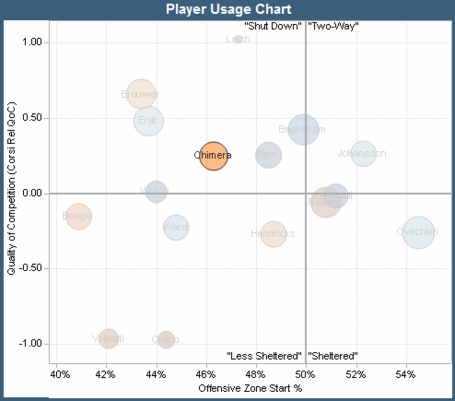 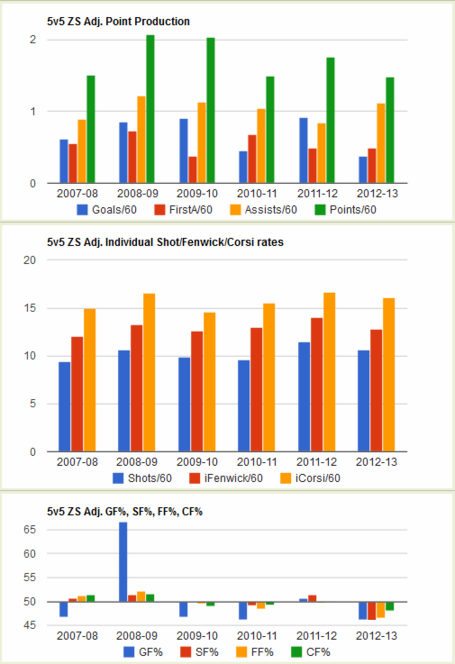 Key Stat: One season after setting a career-high in goals, Chimera's .06 goals-per-game rate was the lowest for any season of his career in which he played more than a single game, with his three tallies (in 47 games) just two more than he had in 2001-02... in three games.

Interesting Stat: Chimmer pumped 92 shots on net, good enough for third on the team for forwards, behind only Alex Ovechkin and Troy Brouwer. Taken with the above, it's not surprising that Chimera was one of only three forwards in the NHL who scored three or fewer goals on 90 or more shots.

The Good: Unfortunately, there’s not much to say here. Chimera had a tough season, and after the surprising success he found during the Boudreau-Hunter hybrid season, his foundering was particularly stark against the backdrop of expectation, particularly given Adam Oates's relative emphasis on speed and forechecking, two things that should have been right in Chimera's wheelhouse. There’s no genuine way to mitigate that fact, other than to say he was about as lucky as a black cat breaking a mirror underneath a ladder. That he was able to get so many pucks to the net is a good sign, and perhaps in another year it would have translated to something more tangible in his boxcars. He scored a goal in the playoffs on his birthday, so that was pretty cool, and despite his goal-scoring woes, if he had sustained his assist production from this season (Chimera was actually more effective at dishing the puck, averaging more primary and secondary helpers in 2013 than he had in his career 2011-2012) through the second half of an 82 game season, his numbers would have reflected a pretty standard Chimera season. But… 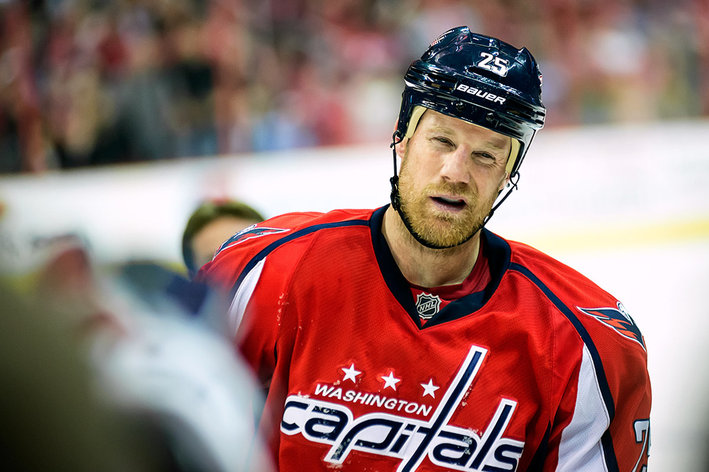 The Bad: His shooting percentage was a career low, and it wasn’t even close. His possession numbers took a drastic dive from last year, despite spending the season with some of the team’s best possession skaters as linemates. Chimera also made a healthy contribution to the cause of keeping a penalty kill unit that struggled for most of the season on the ice. His 14 minor penalties tied him for the team lead with Ovechkin and Mike Ribeiro, who, it’s worth noting, saw substantially more ice time.

What’s worse? The speedy winger is a ripe 34-years-old, and after the sheer plummet from one year to the next, it’s hard not to wonder whether Chimera’s contributions to the Capitals could not be easily replicated by any number of cheaper free agents or prospects for whom the ice time may be more valuable. And while Chimera’s $1.7m doesn’t exactly break the bank, for a guy who doesn’t score, sees but 12 minutes of ice per game (and almost none on special teams), takes a ton of penalties, and is probably on the black diamond grade downslope of his career, George McPhee isn't going to be getting much bang for his buck if this is what we should expect from Chimera going forward.

The Discussion: In a span of two seasons, Jason Chimera has experienced the expectation-exceeding highs and the latrine trench lows of life in the nation’s capital. What will it take for him to live up to his salary next year? What does Chimera bring to the team that can’t be found in the bounteous waters of free agency, or in the smaller prospect pool? At thirty-four, has Chimera seen the best of his days, or could he use the cliché-yet-often-propitious change of scenery?