From Alzner to Ward, we're taking a look at and grading the 2013 season for every player who laced 'em up for the Caps for a significant number of games during the campaign, with an eye towards 2013-14. Next up, Troy Brouwer.

Brouwer and his most frequent linemates: 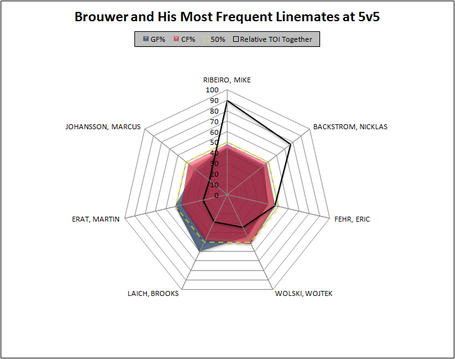 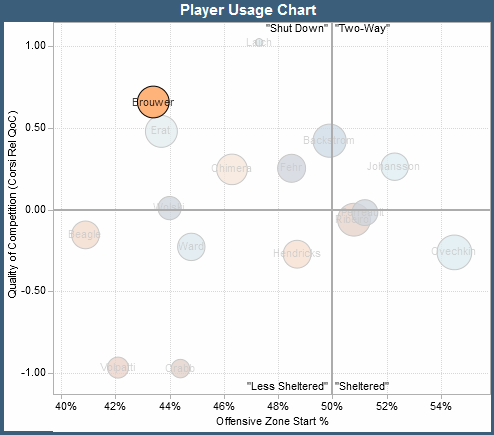 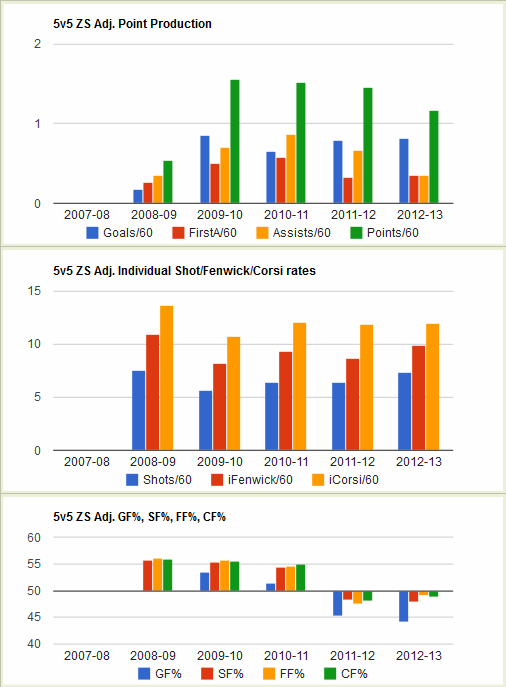 Interesting Stat: Troy Brouwer, a right wing, had a 48% faceoff percentage across 232 draws, a higher win percentage than Mike Ribeiro (45%).

The Good: Brouwer had a good regular season, and was among the team leaders in a number of areas. He finished second on the team in goals with 19 (including a team-high 7 game-winners), power play goals with 7, shots (111) and hits (108). His average ice time (18:47) and power play time (1:31) were both third among Caps' forwards (excluding oft-injured Brooks Laich), and he was one of two Caps forwards (Nicklas Backstrom being the other) who skated more than a minute-and-a-half per game on each special teams unit. And he only took nine minor penalties, finishing the season with the fewest minors per minute of any top-six forward. Overall, Troy did what was expected of a second-line winger – he scored, he was physical, he played special teams and he avoided putting the team in bad situations.

But the bigger question looming over Brouwer before the season started whether he would be able to fill the void left by the departing Alexander Semin, the divisive, love-him-or-hate-him (or both) former Cap who had the second-line scoring winger role locked down in the nation’s capital for years. Big shoes to fill, no doubt, but Brouwer’s stat-line was certainly comparable.

In Semin’s last two seasons in DC, he averaged 0.35 goals, 0.76 points and 0.89 penalty minutes per game. Brouwer’s pace in 2012-13 was 0.40 goals, 0.70 points and 0.60 penalty minutes, a similar stat line (save for the reduced penalty minutes). Additionally, Brouwer was able to give the team a bit more in terms of penalty killing and physicality, while not being relegated to a perimeter game. True, Troy wasn't going to pull people out of their seats with marvelous play-making the way Semin often had... but all goals count the same, right? And with Brouwer’s cap hit of $3.7 million, they came at almost a 50% discount over the pricier Semin. More importantly, Brouwer’s ascendancy into the second-line wing at half the price freed up enough cash for the Caps to bring in Mike Ribeiro, aka that coveted 2C the team had desperately needed for years.

Aside from the offense and the cheaper price tag, the way Brouwer was used by Adam Oates shouldn't go unnoticed (see above usage chart). He played tough minutes without the benefit of a lot of offensive zone starts, which likely explains his lower possession metrics (47.9% Fenwick, 10th among Caps' forwards, and a -3 CORSI Rel, 11th on team). Give him easier minutes and more o-zone starts, and it’s likely he’d see those numbers creep over to the good side of the Fenwick line.

The Bad: While he mimicked Semin’s more recent output in the regular season, he also mimicked Semin’s more recent playoff disappearances - an aspect of Semin's game that were not missed when he left town. The Disappearing Act That Was Troy Brouwer wasn't for lack of trying, of course; he finished the playoffs with a respectable 13 shots and threw in some physicality with 19 hits. But in the end trying wasn't enough, as Brouwer netted just one goal and one assist in seven games against the Rangers, and was noticeably absent for long stretches of the series.

Playoff performance aside, a further look at Brouwer’s numbers show that he, like some of his teammates, grew fat on the power play. Of his 33 points on the season, he only produced 13 at even strength, and his 1.35 Pts/60 at five-on-five placed him tenth among Caps forwards, behind Joel Ward and Jason Chimera. He was 11th among forwards in even strength goals/60, 11th in goals-against/60 and 14th in Diff/60. Part of that is obviously due to the tough minutes he logged, but there's certainly room for improvement - especially as a top-six forward (and of course a healthy Brooks Laich should help ease his workload). Ultimately, Brouwer had what amounts to a career year because of his performance on the power play, something that may not be repeatable if teams begin to adjust to Adam Oates 1-3-1.

And then there was his penchant for talking... perhaps too much at times (especially for someone whom certain segments of the fanbase still resent this atrocity). From his summer comments on Roman Hamrlik to taking swipes at Alex Semin, his signal-to-noise ratio is questionable. Regardless of whether he’s right or wrong, his style and tone can come off inflammatory and potentially be a distraction to a team that already deals with enough drama. Then again, George McPhee has referred to him as one of the game's great leaders - so maybe the buttons he's pushing are the right ones.

The Discussion: What role should Brouwer be used in next year? Should he tone down his statements to the press, or is it good for the Caps to have an outspoken player like Brouwer on the team? What would it take for him to earn a "10"?

More on Brouwer's season: GM on a Couch - Troy Brouwer: Season in Review