Capitals vs Rangers: A Series in Review

We hesitantly emerge from the miasma of hatred, anger, and dejection of the past two days, and delve into the series that was.

Share All sharing options for: Capitals vs Rangers: A Series in Review

Now that we've had a few days to settle easily into our annual coping process, to clutch our brown bottles and make renewed vows to our fitness, to bettering our relationships, to our personal growth— all things that invariably suffer during a Caps playoff push and then the subsequent run— let's dive into the series that caused us our mental, physical, and spiritual erosion.

At even-strength, the Capitals absolutely dominated the New York Rangers. Well, they dominated if you ignore that pesky goal statistic, where the Rangers outscored the Capitals 13 to 9. In 352:04 of even strength TOI through seven games, the Caps got 193 pucks through to Henrik Lundqvist, whereas the Rangers fired only 153 at Braden Holtby on the other end of the ice.

But what about the much-revered Corsi battle? How much would that number tilt if we were to include the ever-important Capitals shots that were blocked, or missed the net entirely? The Capitals 416 Corsi events compared to New York's 320 (that's a 57% team CF in favor of the Capitals) evince what we all saw: at five aside, the Capitals tilted the ice.

In fact, only one Capital- Matt Hendricks (48.2)- had a CF% below 50, which is to say he was on the ice for more Corsi events against than for. On the other bench, only Ryan Callahan broke even for the Rangers. Granted, it's well-established that trailing teams tend to tilt the ice, and though the Rangers led for 42% of the series, while the Capitals only led for 8%, most of that time was spent up by one goal— a lead that doesn't necessarily lend itself to score effects as much as, say, Game 7.

Of course that doesn't mean anything when you fail to score in the final 190+ minutes of regulation even-strength ice time. Whether that was because Lundqvist was channeling his inner 2010 Jaroslav Halak (Lundy posted a .979 save percentage in games 5-7, where Halak made his last name into a verb amongst Capital fans by posting a .978 marker three years ago), or because the Rangers blocked 161 shots, 20 more than the next highest team, the possession numbers absolutely did not translate into success when it mattered most, which is something of a puncture in the wineskin of advanced metric logic— and indeed, the Capitals seemed to defy this philosophy all season long, as they continued to win while struggling with possession during the regular season.

If you prefer to grok your information in a more visual manner, examine the charts below, courtesy of Greg Sinclair from Some Kind of Ninja, remembering that blue represents positive Corsi On numbers and red represents negative, the size of the bubble correlating with just how positive or negative. 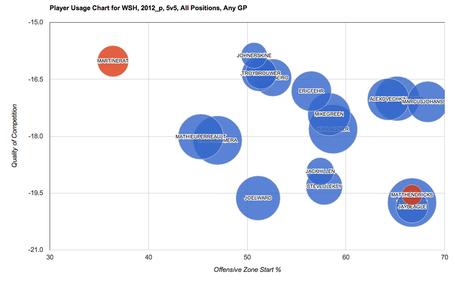 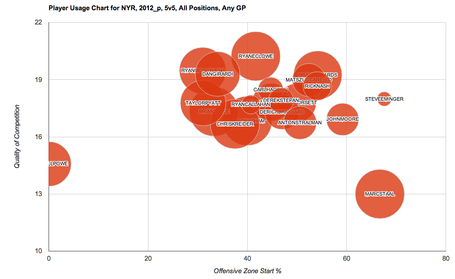 If ever you needed verification that possession proxy paints a picture but does not tell a story, look no further than the above charts while remembering the result of the series.

Indeed, games three and four were both one goal games won by the Rangers, who had notched a power play tally during each affair. In both of these games- the first in the series played at Madison Square Garden- the Rangers received double the power play opportunities as the Capitals. For the Capitals and their fans, it was the beginning of a disturbing trend.

The Rangers ended the series with a playoff leading 28 power play opportunities, while the only teams who were given less than the Capitals' 16 opportunities, the Chicago Blackhawks and the Vancouver Canucks, had series that went 5 and 4 games respectively.

It's worth noting that during the regular season, the Rangers were one of the league's more disciplined teams, but the flux in power play opportunities from the regular season to the playoffs for both team describes a dubious arc. The Rangers earned 3.18 power plays per game in the regular season, which climbed to 4.33 per game during the playoffs, and skyrocketed all the way up to 4.75 from Game 3 thru Game 6. One particular call, involving approximately 97 Blueshirts on the ice at once but with a white sweater ending up in the box, comes to mind.

The Capitals, on the other hand, averaged 3.41 power plays per game during the regular season, and that number plummeted to a meager 2.33 per game, and then even further to a desolate 1.75 opportunities per game from Game 3 thru Game 6, which is to say after the Capitals had jumped out to a 2-0 series lead.

We've got plenty to say on the matter, but why bother when the Captain and his General Manager are willing to take the podium, their words farther reaching and more resonant than ours by far.

After the Game 7 loss, Alex Ovechkin told Slava Malamud of Sports-Express, "Not saying there was a phone call, but [the NHL] wanted Game 7. You know, lockout, escrow, league must make profit."

Personally, I haven't yet crafted my tinfoil hat, but I'd be lying if I didn't check my kitchen for the necessary materials...

When you really boil the series down though, it's just downright weird how it played out. In one manner of thinking, the Capitals won both the even strength and the special teams battles, in that they thoroughly out-possessed New York, and despite the penalty discrepancy, still managed to score more power play goals.

In the opposite (yet equally applicable) manner of thinking, the Caps lost both the even strength and special teams battles in that they were outscored at evens and spent a walloping 49:27 shorthanded, far and away the most of any team in the playoffs. And while this number is inflated by the Capitals' success on the penalty kill, it's still almost an entire game's worth of time that they couldn't spend firing pucks at Lundqvist.

But in the end, the game is won with goals, and on four nights out of seven, the Rangers scored more of them than the Capitals, sending the boys in red dejectedly into the offseason for the sixth consecutive season.