Get to Know the Rangers: The Penalty Kill

We continue our previews of the Capitals-Rangers series by taking a look at the New York Rangers' penalty kill, and how the Capitals might be able to exploit it.

Share All sharing options for: Get to Know the Rangers: The Penalty Kill

[Ed. Note: During the playoffs, every team's depth is tested. Occasionally guys that fly under the radar get called upon to step in and (hopefully) make a positive impact (not you, Dylan). We'd like to take a moment to recognize and thank Steckel Me Elmo for helping us out with the following breakdown.]

As you may have heard, the Capitals will be lining up against the Rangers in the first round of the Stanley Cup playoffs this week and next. As you may have also heard, this will not be the first time in recent years they have done so. Or the second. Or third. You would think that the Capitals (and their fans) would be familiar with the Rangers. However, for the newcomers, and those that have not been paying attention, I’ll discuss the Rangers penalty kill, which will play a big part in deciding the series, considering the importance of the Capitals’ power play to their success.

First, we’ll look at the Rangers killing a penalty against the Capitals on March 10th. At 6:46 of the first period, Anton Stralman was called for hooking sending the Capitals to the power play for the first time in that game.

After watching the video, let's dive right in. 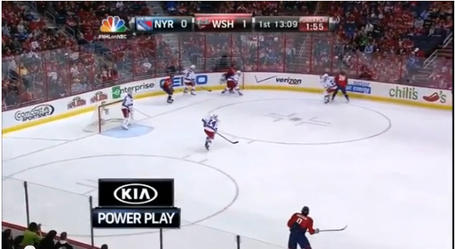 Right off the bat we see the Rangers being very aggressive on their PK, with three players in a position to pressure the puck. The final player, Ryan Callahan, is in the high slot to be able to cover a pass or shot attempt going to, or coming from, Alex Ovechkin. 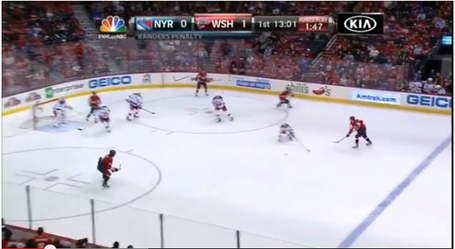 Here the Caps have won possession of the puck. Unlike many teams, the Rangers’ players don’t sit back and attempt to force passes around the outside; they doggedly pursue the puck Here you can see the three Rangers not pressuring the puck at the point collapsing down around the net to block any shot, or take care of any rebound. The Capitals are still able to get the puck to Ovechkin for a shot, but it is (unsurprisingly) blocked by Dan Girardi. 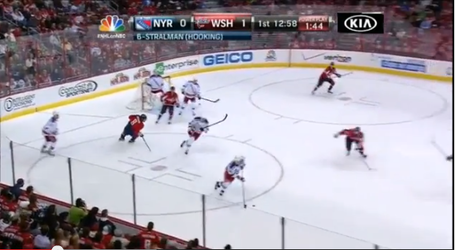 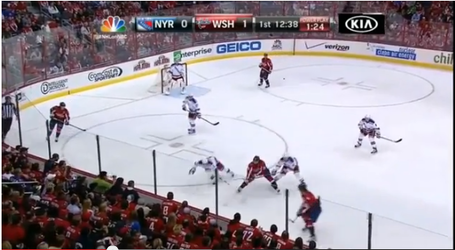 The Rangers have not deviated from how they started the PK, once again showing an extremely aggressive penalty kill, with two players pressuring the puck at the top of the circles. The puck gets cleared again, the Capitals regroup, and John Carlson dumps the puck in with a hard-around, where both teams are in a scrum for the puck in the corner. 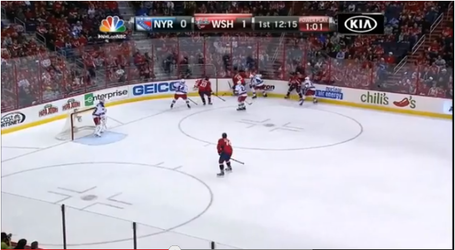 Here is perhaps the best example of the Rangers’ being aggressive on the PK, with all four Rangers in the corner in a battle for the puck, leaving Carlson completely alone in the slot. This almost backfires for the Rangers as the Capitals are able to get the puck out to Carlson for a shot. Not the best thing to let happen, but when you have a goalie as good as Henrik Lundqvist, those mistakes will be often be covered. After the faceoff, the Capitals get the puck down behind the net. 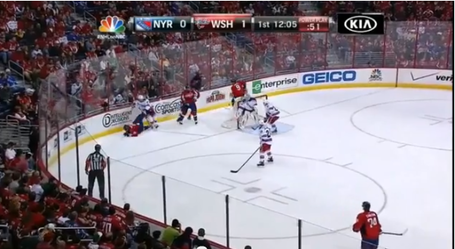 Here the Rangers’ defensemen pressure the puck below the net, while the forwards collapse down to cover the slot. The power play continues like this for the remainder of the 50 seconds, with no great chances for the Capitals, as the Rangers are able to pressure their way to a successful penalty kill.

Next we’ll look at another Rangers penalty kill, this one against the Penguins on April 3rd, when Ryan McDonagh was taken off for high-sticking at 2:24 of the first. This penalty kill is notable as it provides a blueprint on how to beat the Rangers’ PK, despite a failure to convert. Additionally, it must be noted that with Marc Staal out, McDonagh is one of the two defensemen that John Tortorella really rides on the PK (more on this later).

As we can see, the Penguins were able to generate some quality chances against the Rangers' PK. 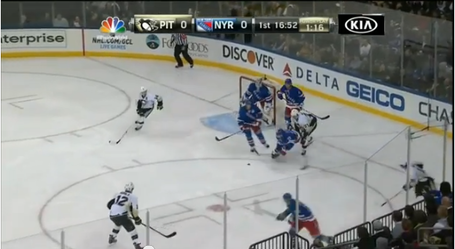 The penalty kill started with the Rangers winning the faceoff and clearing the puck, and then an offside forced by the Rangers holding the blueline strong. When Pittsburgh finally gets the puck down into the Rangers zone, they are immediately pressured by three defenders, with the fourth one not far off. However, the Penguins are able to push the puck to Jarome Iginla, who then makes a quick pass to the other point man for a good shot through traffic. 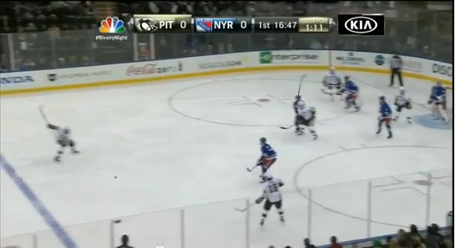 Here the quick puck movement was able to catch the Rangers’ aggressive PK out of position and set up a shot from the point. It may not be the one-timer from the circles that many look for, but they get a dangerous shot through to Lundqvist with multiple forwards around the net for the rebound that may occur (hint: it didn’t; Lundqvist is pretty good). 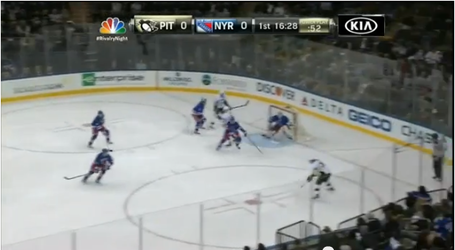 After the faceoff, the Rangers pressure the puck, deflecting it out of the rink. Pittsburgh wins the following faceoff cleanly, and begins to move the puck without hesitation. The quick puck movement, combined with the Rangers’ aggressive strategy leads to defenders getting taken out of position and opening James Neal for the shot. While that’s not a great angle shot, it’s not one that most teams would like to give up to a shooter like Neal. The Rangers then clear the puck and Pittsburgh regroups, and dumps the puck in deep. 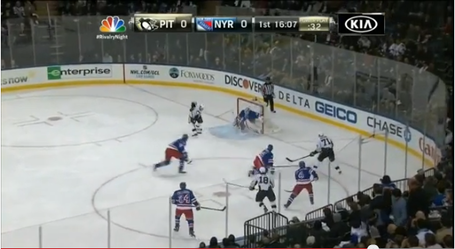 All four Rangers go to the corner to pressure the puck in hopes to win the battle and get the clear. However, this leaves Morrow wide open in front of the net, and Evgeni Malkin is able to win the puck battle and throw the puck out to Brenden Morrow. Luckily for the Rangers, it’s into Morrow’s feet, and he is unable to control the puck for a real chance. But that is not something that they would like to see happen again, despite the result. However, the pressure almost pays off for the Rangers shortly after. 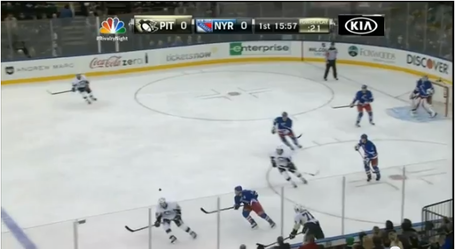 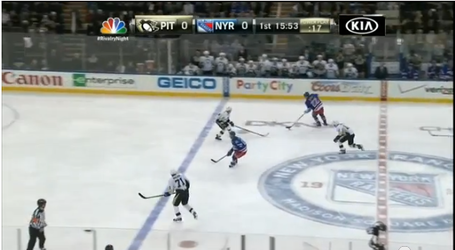 Callahan pressures the puck at the point, leading to a turnover, and a 2-on-2 the other way as Brian Boyle is able to join the rush. While this didn’t turn into anything too dangerous for the Rangers, these kinds of plays are results of the high-risk high-reward style Tortorella likes to employ (look no further than their last game against New Jersey and the goal created by pressuring the Devils in the neutral zone) Despite the results, I cannot imagine Tortorella is happy with the close calls the Rangers gave up during this penalty kill. 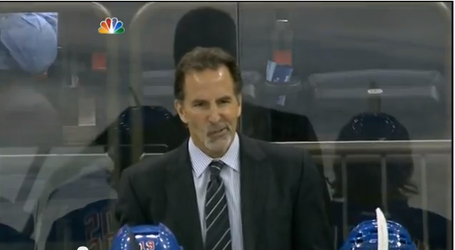 It should be no surprise that Tortorella has his players skating an aggressive system. Outside of the aggression, the other large takeaway from the Rangers’ PK is how they collapse around Lundqvist in an attempt to prevent shots from getting through to the net. This is something that the Capitals may be able to use to their advantage by using the Rangers’ defenders as screens.

Some teams will play a more passive system on the penalty kill, meaning the team on the power play must be patient and allow players to move to get open. But the Capitals must be more pro-active against the Rangers. The key to beating the Rangers’ PK, as shown by the Penguins power play, is to use the Rangers’ aggressive nature against them. But moving the puck quickly with short, crisp passes, the Caps can catch the Rangers out of position, and open up shooters for their chances. 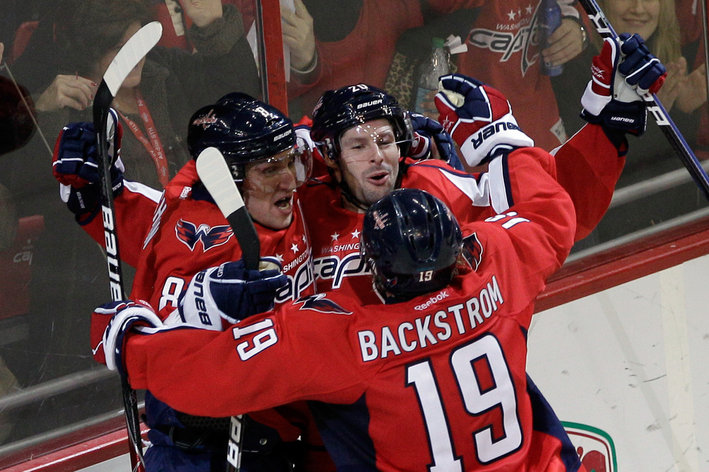 Mike Green, unsurprisingly, will be an integral part of the Capitals’ power play, as he always is. One need look no further than the Capitals’ last game of the season against the Bruins to see the impact Green can have on a game with his power play production. While the Bruins’ penalty kill is not as aggressive as the Rangers’ it is important to note that on the first goal of the evening, quick puck movement enabled Green to get open for a shot that beat Rask. The Capitals will need to use the same tactics to beat the Rangers’ power play. Additionally, having two shooters as dangerous as Green and Ovechkin means that the Rangers will have to dial back their aggressive puck pursuit for fear of being caught out of position and burned.

As we know, a PK is about systems and personnel. It must be noted that the Rangers are a very top-heavy team on the penalty kill, with the quartet of Callahan-Stepan-McDonagh-Girardi playing 18.1% of the PK time on the season, and 32.8% in the last ten. And the top-eight most-frequent combinations on the season have at least two of those four players (and top-nine for the last 10 games) on the ice. Considering how hard Tortorella rides those four players, the Capitals have to take advantage when they're not on the ice. One final note on the Rangers penalty kill is that they don’t have to send it out onto the ice very often; they have the 8th-fewest times short-handed in the league. This makes every power play for the Capitals that much more important.

The Caps scorched the League with the man advantage this season, and there's no reason to believe they can't continue their success against a middle-of-the-pack Rangers penalty kill. But it won't be easy. Then again, it never is at this time of year.