Get to Know the Rangers: The Forward Match-Ups

For the fourth time in five years the Washington Capitals face the New York Rangers in the playoffs. It's a familiar foe, but let's take a look at how John Tortorella is using his new-look lineup. First up, the forwards.

Share All sharing options for: Get to Know the Rangers: The Forward Match-Ups

Last season we took a look at how the Boston Bruins and New York Rangers coaches (Claude Julien and John Tortorella, respectively) liked to use their players in an attempt to anticipate what Caps fans could expect to see. We were pretty accurate in both our Bruins and Rangers predictions. We'll continue the tradition by taking a look at how Tortorella has deployed his players in this shortened season. One caveat, with such a short season there is bound to be some anomalous numbers due to small sample sizes. Throw in the new-look Rangers lineup due to the trade for Rick Nash over the summer and then further trades at the deadline, and it appears as though Tortorella spent a good part of the season experimenting to try to find the right chemistry.

In this post we'll look at the Rangers forwards. First, let's look at their most common line combinations (via Left Wing Lock):

Over the course of the full season, no forward line spent even 8% of the time together. That's an indication that Tortorella was juggling lines consistently throughout the season. The other thing that stands out is that 2 of the most 3 common line combinations that involve Rick Nash do not involve Brad Richards. When Nash was acquired during the off-season most observers assumed he'd play on the top line along with Richards. Further, the wing opposite Nash when he has played with Richards was Marian Gaborik, who is no longer with the team. Given the major shake up in the Rangers lineup, let's look at the lines over the last ten games:

The first thing that jumps out is that, unlike the line combinations for the season, it appears as though Tortorella has found some line combinations that he likes. Whereas no line has played more than 8% of the time over the course of the season, three lines have spent over 10% of the time together during the last ten games, with another line just under 8%. However, like the numbers for the season as a whole, Nash has not spent a lot of time with Richards over the last ten games. In fact, Nash has spent substantially less time with Richards over the last ten games than he has as a season as a whole (~11% on the season, ~3% over the last ten games). Of course, over the last 3 games Nash and Richards have spent much more time together, and based on the last game Derick Brassard will be the center on the third line, so what Torts will do is anybody's guess. Whether the Rangers spread the talent and make the Caps defend three scoring lines or stack their scorers into two strong lines will be one of the storylines to watch. Given the high stakes, I'll be surprised if the Caps don't get a healthy dose of Nash and Richards together.

Now that we have an idea of how Torts has put his lines together, let's take a look at which players have been most effective, and add some context to their utilization (and the columns are sortable, because we're awesome like that):

Corsi On measures shots directed at the net by either team when a player is on the ice. Corsi Rel is the measure of a player's Corsi, relative to their teammates. It's the difference between their Corsi On and their Corsi Off. Corsi Rel QoC represents the Corsi Rel of the opponents the player faced over the course of the season. Zone start percentage is the percentage of non-neutral zone faceoffs a player is on the ice for in the offensive zone. On-Ice Sh% and On-Ice Sv% represent the shot percentage for the Rangers and save percentage for the Rangers, respectively, while the player is on ice. PDO is the sum of On-Ice Sh% and On-Ice Sv%, times one thousand. GF/60 and GA/60 represent the number of goals scored for the player's team and goals scored against the player's team for every 60 minutes a player is on ice, respectively. 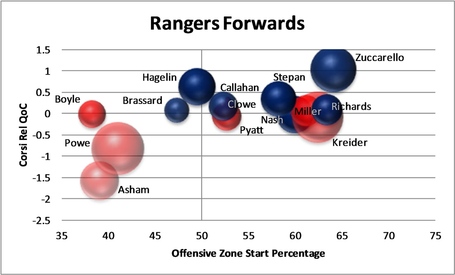 Right away you notice that the majority of Rangers forwards have over 50% offensive zone starts, indicating that most of their lines spend more time on offense than defense. This makes sense, the Rangers are a top-5 Fenwick% team, and a top-10 Corsi% team (the Caps are significantly worse by both measures). The Rangers are a much better possession team than they were when they faced the Caps last playoffs. The only players that are substantially below 50% offensive zone starts are Brian Boyle, Darrell Powe, and Arron Asham. To mitigate the territorial disadvantage, Torts puts these players out against weaker competition (and not very often). On top of playing with a territorial disadvantage, this group (along with 2012 playoff hero Chris Kreider, who has become a 2013 possession sieve) is also getting handily out-shot, the only Rangers line for which this is the case. The fourth line is clearly the line the Caps are going to want to exploit, but you can be sure that Torts won't give them many opportunities (right, Stu?), and the few times these guys do see the ice will probably be against the Caps' fourth line. Go get 'em, Wagon.

The quality of competition the Rangers forwards face (outside that fourth line) is pretty tightly packed. I wouldn't expect to see a true shutdown forward line this series. The only player that gets any separation from the pack in terms of quality of competition is Mats Zuccarello, and he is getting the most frequent offensive zone starts of any forward. While he may be playing against tougher opponents, he's not exactly being thrown tough assignments (and by simply looking at his game, a cursory sniff test would assure you that he's not a shutdown forward). The quality of competition numbers make sense in light of the line combination numbers up above; you would anticipate more lines with higher percentages of time spent together if a coach was aggressively line matching with a shutdown line (or scoring line getting easy minutes). Expect to see the Rangers roll three tough lines throughout the game(regardless of which players are on those lines), picking their spots to try to get the fourth line a few minutes.

Looking at PDO, there are several Rangers that have PDO metrics significantly higher than you'd expect (recall that PDO tends to regress to 1000). The PDO school of thought would have the Rangers forwards in for some regression to the mean, but the reason most of those guys have high PDO numbers is because Henrik Lundqvist is floating their On-Ice Sv%. Hank has a save percentage of .926 on the season, but his even strength save percentage is .937. Almost all of the Rangers top forwards actually have an On-Ice Sv% below .937, so unless you think Lundqvist's great play is going to make the Rangers shooters go cold, I wouldn't expect the picture to change much.

The Caps are going to have their work out for them at even strength. The Rangers, unlike in many prior years, have solid depth up front and will be able to ice three lines that can score. The series won't come down to specific line match-ups, Torts is willing to play a variety of combinations. The the Caps forward lines will all need to be able to play patient and disciplined hockey at even strength. Three strong lines for the Rangers means that all three defensive pairs for the Caps will have to be on their game, but where the Caps seem to be at a significant disadvantage is in the second line. Mike Riberio has had terrible possession numbers all year, so regardless of which three Rangers are on the ice against him you'd expect to see the puck in the Caps defensive zone quite a bit. If Joel Ward can return it'll be a big boost for the Caps' two-way game (and penalty killing unit), but they'll have an uphill battle either way. The Caps should have a special teams advantage, so if they can keep pace with a strong Rangers team at even strength, they'll have a good chance to move on to the second round.