Get to Know a Ranger: Derick Brassard

Share All sharing options for: Get to Know a Ranger: Derick Brassard 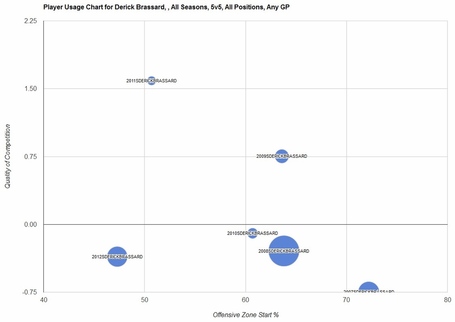 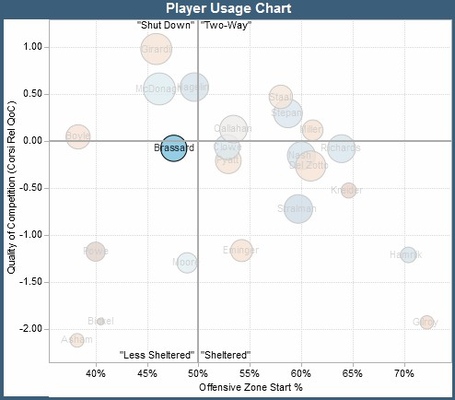 Why you should know who he is - Since being acquired from Columbus in the trade deadline blockbuster that sent Marian Gaborik the other way, Brassard has found early success on Broadway, sparked by a one-goal/three-assist debut in a rout over Pittsburgh. Brassard has spent time centering Rick Nash and Ryane Clowe, but seems likely to start the playoffs in the middle of the third line, between Taylor Pyatt and Chris Kreider (at least that's how things shook out on Saturday). Along with Brad Richards and Derek Stepan, Brassard provides the Rangers with a good amount of skill and depth down the middle on their top-three lines. No matter who comprises it, the Caps may have their hands full with the Rangers' third line (which isn't to imply that they won't face challenges in containing John Tortorella's top-six forwards), and containing that third trio will either be extra duty for one of Adam Oates's top-two defensive pairs or tough minutes for Steven Oleksy and Jack Hillen. If this series ends up with the coaches matching power-versus-power, look for third lines to have have a big impact on the series outcome.

How the Caps can stop him - Be aware. Be very aware. Brassard is a terrific passer with impressive vision, so the Caps can't get caught watching the puck and losing their assignments while defending, or Brassard will make them play (especially if he's got a decent option or two to feed). As is usually the case with a guy like this, be physical, but more importantly be smart, and look to try to gain some advantage in the Rangers' end of the ice, especially in the face-off circle (where Brassard is 48.2% successful).