A snapshot of how Adam Oates has deployed his troops through 29 games, and how they've fared.

It's been a few weeks since we've taken a look at the Caps Usage Chart for the season, and with roughly 60% of the season behind us, now seems as good a time as any for a peek at what's going on at even-strength.

By now, you know what you're looking at, but here's a quick refresher: the charts below are Rob Vollman's visualization of how the team's skaters have been deployed at five-aside over the course of the season and how they fared in those roles. They show the percentage of non-neutral zone faceoffs for which each player has been on the ice on the horizontal axis and the average quality of their competition on the vertical - upper-left would be the hardest minutes (tough competition and not many starts in the offensive zone), lower-right, the easiest (weaker competition and favorable zone starts). The size of each bubble is a relative indicator of how well the team performed with that player on the ice, with blue (with grey labels where applicable) being positive performance and red (black labels) being negative. Usual "sample size" caveats apply.

So here are two Caps charts so far - the first covering the season's first 17 games, the second covering the year-to-date (thanks to Rob; click to enlarge, and for the raw data, head over to BtN): 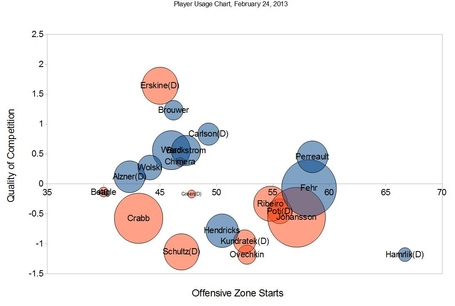 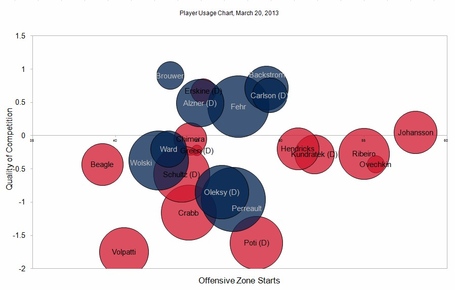 There's more here (there always is), but those are some of the things that jump out. What else do you see?

Special bonus treat! Our pals at Jewels From The Crown threw former Kings on a chart, so we thought we'd do similarly and look at how former Caps are faring (of course, here's another look at how a former Cap is doing). Armed with the knowledge below, which former Cap would you most want to be a current Cap? 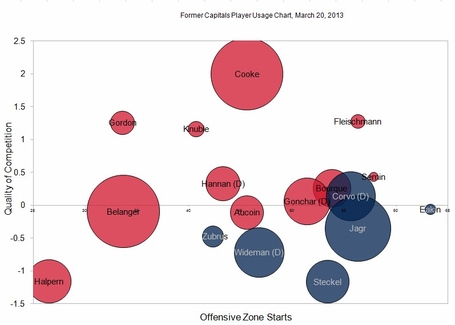