Share All sharing options for: On Jason Chimera's Plummeted Production

Jason Chimera has seen a lot of professional ice. Nearly seven hundred NHL games worth, in fact. He’s seen a lot of wayward elbows, a lot of high sticks. He’s tasted plenty of puck, and his fair share of knuckles to boot.

He’s got the visage to prove it. A crooked nose hangs above a pair of thin, oft-smiling lips. Scars crisscross his chin and cheeks like an early version of Gerry Cheevers’ iconic goalie mask, though these are usually covered by a few days worth of light-colored stubble.

He’s been called Chippy, Chimmy, Chimmer, and Chimdog. He’s played on awful teams and he’s played on very good teams. He’s even played on an awful team and a very good team in the same season. Jason Chimera possesses a rare set of skills. Players in the NHL are usually classified— and perhaps too generally— by their on-ice style. Skaters termed playmakers are expected to pass to those called snipers, who ought to be firing it on net. Grinders are supposed to eat tough minutes, win board battles, and score the occasional dirty goal.

Chimera doesn’t entirely fit any of these labels. He doesn’t possess the hands, offensive vision, or creativity to be a forty-assist guy or a thirty-goal scorer. But the thirty-three-year-old forward’s calling card is his blazing speed, and it puts him outside the mold of players who tend to be lumped into the grouping of a conventional grinder.

In Washington, Chimera has made a name for himself by producing quietly and consistently, usually giving an offensive spark to the bottom lines while the bigger guns kept the gears turning up top, but doing spot duty in the top-six. A highly moveable piece in an ever-changing puzzle. You can never have enough of those.

But Chimera’s production has suddenly plummeted, and seemingly without explanation.

Last season, despite facing the challenge of transitioning between two coaches with starkly contrasting philosophies, Chimera enjoyed the finest season of his professional career, notching career highs in goals (20), points (39), and shots on goal (205).

This season he’s being outscored by such offensive worldbeaters as John Erskine, Tomas Kundratek, Steven Oleksy, Matt Hendricks, Joey Crabb, Jay Beagle and Karl Alzner. The only players on the team who share Chimera’s dubious distinction of zero goals are Jeff Schultz and Tom Poti, who have, um, lower offensive expectations. League-wide only Ryane Clowe has fired more shots on goal (55) than Chimera (51) without denting the twine.

So what could be the cause of such a dropoff? Because surely the sheer descent from career bests to utter futility in a single offseason must have some explanation, right?

surely the sheer descent from career bests to utter futility in a single offseason must have some explanation, right?

Conventional thought would lead us to believe that Chimera is struggling to produce because he is failing to possess the puck as well as he did last year. Indeed, his relative Corsi rating, which measures possession, is considerably lower than last year (down to -3.0 from 4.6). Though this is notable, the difference is not vast enough to account for the severity of Chimera’s nosedive.

One might then think that Chimera is not getting the same quality of chances as he did last year, but in actuality the average distance of his even-strength shots on goal are virtually the same.

A third explanation for Chimera’s inability to score would be that he is skating with players who do not give him the best chance to do so. But Chimera has spent almost half of his ice time with Joel Ward, who is one of the team’s best possession forwards and point-producers besides. Chimera’s second most common skate-mate? One Mike Ribeiro, he of 28 points, 19 of which have been achieved by dishing the puck, in 25 games. So it’s pretty clear the people around Chimera aren’t the problem.

So maybe the toughness of the competition he’s going up against is the problem? Well, last year Chimera was thriving in tough minutes, and with more starts outside the offensive zone than within. Jason is actually being assigned to lesser competition this year, and is being defeated by them, as evidenced by the chart below. 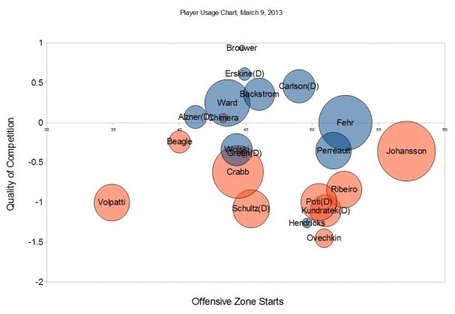 So finally we come to the great leveler: luck. Chimera’s on-ice shooting percentage, which takes the shooting percentages of him and his teammates while he’s on the ice, was 7.8% during his 20-goal campaign. This year it’s down to 6.25%, a drop, but again that’s not a big enough difference to explain Chimera’s drop-off, let alone the goose egg.

If we’re to stay outside the realm of rampant speculation and "eye tests," it’s difficult to pinpoint a reason for Chimera’s decline - perhaps the answer is "all of the above." And the best we can offer as a fix is a simple one - keep shooting the puck and the points will come.

Or perhaps Chimera could use a change of scenery, cliché as that idea is. With the trade deadline looming, the speedy winger may garner some interest, especially if his luck turns around a bit; he doesn’t command much money, and amidst this awful season, George McPhee could hardly ask for much in return. Chimera has been effective in the post-season since coming to Washington, and his penchant for performing well in the tighter ice of the playoffs is likely to attract some suitors.

In many ways, Jason Chimera's 2013 has been every bit as unlikely as his 2011-12, if not more so. And for the time being, he and the Caps have no choice but to ride it out, because what goes up must come down... and what's gone down, usually pops back up. Eventually.