A snapshot of how Adam Oates has deployed his troops through nine games, and how they've fared.

Back in June we posted on the Caps "Usage Chart" for the 2011-12 season - Rob Vollman's visualization of how the team's skaters were deployed at five-aside over the course of the season and how they fared in those roles. And while it's far too early to draw conclusions about the 2013 campaign, a peek at how Adam Oates has put his players to work in his system reveals some obvious - and some not-so-obvious - early-season trends.

The chart below shows the percentage of non-neutral zone faceoffs each player has been on the ice for on the horizontal axis and the average quality of their competition on the vertical - upper-left would be the hardest minutes (tough competition and not many starts in the offensive zone), lower-right, the easiest (weaker competition and favorable zone starts). The size of each bubble is a relative indicator of how well the team performed with that player on the ice, with blue being positive performance and red being negative. (Of note, this early in the season these numbers can fluctuate quite a bit even from game-to-game, so the small sample on which the chart is based should be taken with a full shaker of salt.)

So here's the Caps chart so far (thanks to Rob, who will be providing these throughout the season which will hopefully show both team and certain players improving over time; click to enlarge, and for the raw data, head over to BtN): 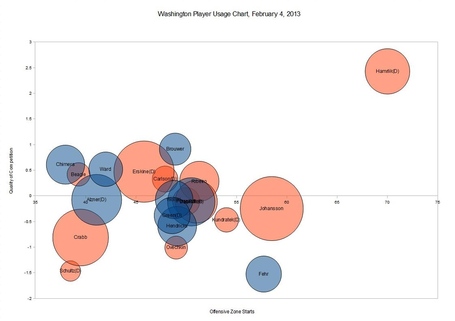 Anyway, there's a lot there. And at the same time, there's really nothing there - it's just too early to tell much of anything. But this is what we've seen so far, and it provides some points to consider, both in retrospect and going forward.