The Noon Number: May the Fors Be With Them?

A look at the Capitals' year-to-date puck possession

Share All sharing options for: The Noon Number: May the Fors Be With Them?

By way of background, FF% Close represents the percentage of non-blocked shot attempts a team takes while the game is close (defined as within one goal in the first two periods or tied in the third period). FF% Close is important because, as we noted a couple weeks ago, teams that do not have a good FF% Close generally do not have much playoff success. The Caps' current 47.2% is still pretty poor, but at least the team is trending in the right direction, right?

Buy or sell that the team has played its best hockey of the season over the past five weeks? 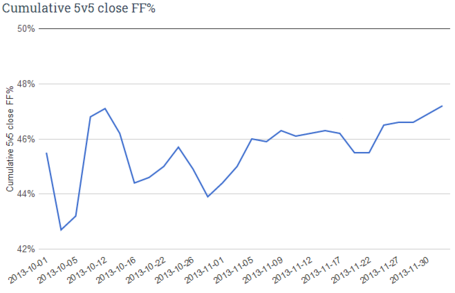