Some perspective on the Caps' top center's perceived struggles in the dot, the possibility that the team is better off without one of it's core players, and dropping the mitts with toys in this week's installment of "you ask, we answer."

Our first question(s) this week asks about the team, its top center and faceoffs:

@JapersRink any thoughts on Backstrom's faceoff skills this season? The whole team seems very down in that category, but #19 in particular.

@JapersRink not a well thought out question, but why are FO% #s down when the coach was one of the best in his day

Of course, not all faceoffs are created equal. So let's take a deeper look and compare last season to this one so far - first in terms of game situations, then by zones:

So the significant (and I use that term very loosely) differences here are at even strength and on the penalty kill, and mostly in the neutral zone (the combined in-zone faceoff percentage in 2012-13 was 50%; in 2013-14, it's 49.8%). And those differences are less than two even-strength wins, one shorthanded win and about two-and-a-half low-leverage neutral-zone draws per game. And as for those quick-trigger Alex Ovechkin strikes and other instant offense? The team is actually winning more offensive-zone draws (goodbye Mike Ribeiro, hello Mikhail Grabovski), and Backstrom is up a tick... from 46.3% to 46.4%.

Where are the drops? Well, Marcus Johansson is within two faceoffs of his total for last year (87), and he's winning just 34% of them, down from 46% last year. The Caps have also had a couple of non-centers (Eric Fehr and Martin Erat) playing the position for stretches, and they're at a combined 47.4%. Joel Ward and Jason Chimera took a combined 101 draws last year and won 58.4% of them; this year, they've already taken 102 (huge increase in shorthanded faceoffs, where 50 of those have occurred) and have won just 46.1% of those. Brooks Laich has also taken about 12% of the team's draws, but has won just 44.1% of those. All of that goes a long way towards explaining the drop in faceoff percentage and just what types of faceoffs the team is losing nowadays that they might have won before... and brings us to Backstrom. Let's break him down like we did the team:

I like this question because it reminds me of a post I wrote about Backstrom's faceoffs nearly five years ago. (Maybe that should've been another Ed. Note/Confession.) Anyway, Backstrom's faceoff percentage is down from 51.4% last season (and 51.8% over the last three) to 48.0% this year. At just under 18 draws per game, that difference is roughly 3/5 of a faceoff win per night difference. He's essentially winning at the same rate in his highest-leverage situations (on the power play and in the offensive zone), and is doing markedly better in the defensive zone (again, as with all of these... small sample caveats apply). Where is he down? In the neutral zone and at even strength. As to the latter, I'd hypothesize that it's because he's starting more shifts in the offensive zone than last year and playing a bit more with Ovechkin - and you can bet that opposing coaches are doing all they can to try to win those faceoffs.

Here's the bottom line: Nicklas Backstrom is basically doing what he's been doing in the dot and is even up a bit in higher-leverage draws (though I certainly wouldn't assume that's going to last). He's also improved his faceoff percentage each month so far, starting with a 45.6% win rate in October, followed by 47.9% in November and 54.2% in December. On the list of issues the Caps need to address, this one's way down there.

As for Adam Oates's impact, he's actually the second consecutive Caps coach who was tough to beat in the faceoff circle, and neither he nor Dale Hunter (nor Sergei Fedorov nor Boyd Gordon nor David Steckel, for that matter) has turned Backstrom or his Caps teammates into faceoff monsters.

Our second question asks about the suddenly oft-injured Brooks Laich:

@JapersRink I might have missed it if it's been discussed ,but how to the #Caps 5x5 Fenwick close nums compare w/ & w/o Laich in lineup?

D'ohboy hit on a similar point in our comments, noting that "[i]t’s no surprise that the Caps’ recent resurgence in both puck possession and goal production have coincided with Laich’s absence and the consequent increase in playing time for Fehr, Chimera, Ward, and Erat."

We've discussed Laich's (and Troy Brouwer's) puck possession issues in this space before and came to the conclusion that "neither Laich nor Brouwer is going to produce good puck possession numbers on a line that's ill-equipped to do so, and that's precisely what you've got when they're constituting two-thirds of a trio. They need to be separated - and the sooner it happens, the better."

Mercifully, the two were separated on November 23 and the results have been good (in part, to Peter's point, because it has allowed Fehr to get back into the lineup, and in a top-six role to boot). Since the breakup, the Caps have posted a 52.1% five-on-five Fenwick percentage in close situations (51.8% since Laich exited the lineup). As a point of reference, the Blackhawks are leading the League in that metric at 56.6%, and it's worth noting that the teams the Caps have played over this span are generally pretty poor possession teams... and they got manhandled on Tuesday night. Still, the improvements have been significant and are important - just take a look at the Caps (via Extra Skater, caption added): 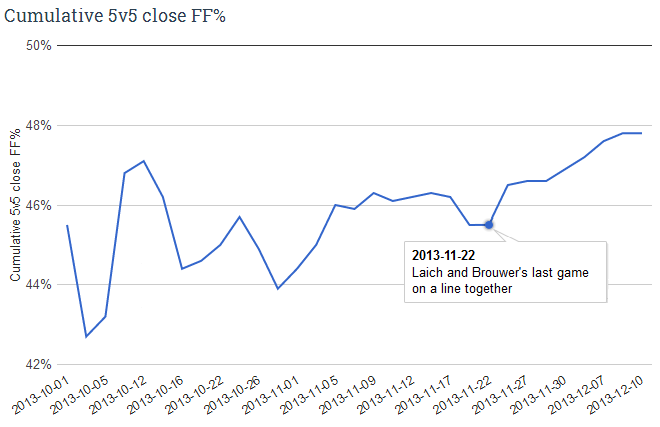 The reconstructed second and third lines have improved the Caps (who could've seen that coming?!), but that doesn't answer your question, so here you go: since Adam Oates took over behind the Caps' bench, the team's 5v5 Close FF% has been 46.6% with Laich in the lineup (34 regular season games) and 49.1% when he's been out (45 regular season and seven playoff games).

In good health and the right situation, Brooks Laich can certainly help this team. But he probably hasn't had both of those things (if he's even had either) at the same time in calendar year 2013.

And how about one more for good measure? 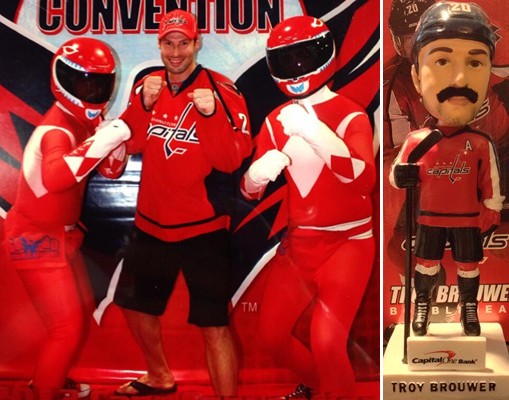 I'm actually pretty upset I somehow missed this question during Movember, but it's still an important one to answer.

Let's do a quick tale-of-the-tape. The Caps list Brouwer at six-foot-three and 213 pounds. That's a big dude. The bobblehead stands about 6.25 inches tall and weighs a bit over four ounces, but that's in full uniform and includes the base. So a Troy Brouwer-sized bobblehead (based on height) would only weigh three pounds, while the bobblehead-sized Brouwers would each weigh nearly 18 pounds... times 50 equals 900 pounds of mini-Brouwers.

Given the above, this is an easy answer, I'll take the Brouwer-sized bobblehead, go for a quick body shot followed by a right-cross to that giant head and hope for the best; trying to fight fifty 18-pound living action figures would be brutally exhausting. Even if the bobblehead was 6'3", 213 and the mini-Brouwers only weighed a quarter-pound, my answer would be the same, since fifty of pretty much anything trying to kill me is sorta mortifying, and Troy Brouwer is pretty resilient - dude doesn't miss hockey games, so a kick or two while 49 other hims attack me probably wouldn't slow the mob for long.