With the Capitals and Flyers renewing their rivalry on Friday night, a late first period goal by Nicklas Backstrom broke a scoreless tie... and there was plenty more where that came from.

On Friday night two historical Patrick Division rivals got re-acquainted with their first meeting since being reunited in the Metropolitan Division. The Philadelphia Flyers came out with a strong start, including a great scoring chance from newly-acquired Steve Downie, now in his second tour of duty in Philly. But Braden Holtby made all the saves he needed to in the Caps net, before a horrible shift by the Flyers late in the first gave the Washington Capitals' top line a chance to get on the board on just the second Caps shot of the game.

The shift was highlighted by some terrible play with and without the puck by Flyers star Claude Giroux, and some great play by Nicklas Backstrom and Nate Schmidt. (Anyone that would still like to complain about where we ranked Backstrom among the Division's centers can feel free to take a seat.) First, the shift that would be the beginning of the end of the Flyers' night:

The video picks up the shift with the Flyers in possession in the Caps' defensive zone. Notice that Giroux is on the ice and involved in the offensive play and the clock shows just over 3:30 left in the period. Giroux had actually stepped on the ice for this shift with 4:28 remaining in the period - he'd already been on the ice for a minute. The Caps are able to keep the puck to the outside and eventually work the puck to the neutral zone before dumping it into the Flyers' end and going for a change. Giroux - facing no real forecheck with the Caps making that change - retrieves the puck with just over three minutes left.

Giroux is known for his puck skills and defensive acumen, but on this play you'd never know it. As Backstrom shows up in front of Steve Mason, shadowing Giroux's movements, we see Braydon Coburn skate into the corner to the left of Giroux and Mason. Rather than giving the puck to Coburn and heading for a change himself (his shift clocking in at a minute-and-a-half already), Giroux passes to Nicklas Grossmann. Coburn is the better skater and passer of the defensive pair, so it was to the Caps' advantage that the puck went to Grossman.

Further to the Caps' advantage, the pass was terrible. The pass forces Grossman to play the puck on his backhand with his face to the corner-boards just as Eric Fehr arrives on the forecheck, poking the puck away from Grossman and back to Backstrom. (Alternatively, Giroux could have actually been trying to pass the puck to Coburn, but missed so badly that the puck went to the corner for Grossman. The way Grossman reacts to the pass makes it look like he was expecting the puck to go to Coburn instead. Either way, Giroux made a horrible pass to start this sequence... which sometimes happens to even the best of 'em when they've been on the ice for 90 seconds.)

Backstrom tries to make a quick pass back to Fehr, who is charging to the net after getting the puck to Backstrom, but Mason poke-checks the pass back to the corner. This attempted give-and-go between Fehr and Backstrom is a staple of the offensive zone attack at every level, but the Caps weren't able to connect in this instance. Undeterred, Backstrom retrieves the puck and passes to an uncovered Martin Erat. Why was Erat uncovered? In part it's because after Giroux made his pass to Coburn/Grossman he curled out from behind the net away from the play. By the time Erat gets the puck, Giroux is already covering the far point (Schmidt) and probably trying to get as close to the bench as he can since he's already been on the ice for 100 seconds or so. 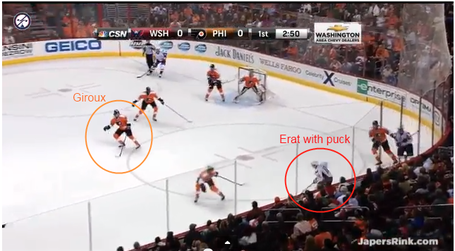 Wayne Simmonds is trying to cover for Giroux in the middle of the ice, but he's not a center and doesn't make a good defensive read. He's standing in the middle of the slot, which is generally a safe place to be defensively, but while playing as a center he needs to pick up one of the Caps' three forwards down low - none of them is in the slot. The closest one is Fehr, standing below the faceoff circle on the far side of the ice from the puck, but he's been covered by Grossman since Giroux's ill-fated pass. That let's Erat do this:

The shift could have ended right there, but Erat blows the puck wide of the net. Luckily for the Caps, another potentially self-clearing shot wide of the net ends up with Schmidt using his mobility to keep the puck in at the point. Unlike the last time, Schmidt doesn't have an option to go D-to-D at the point because he has to skate to the top of the circle to get the puck and Mike Green is all the way on the far side of the ice. Instead, Schmidt makes the smart read and puts the puck back behind the net where Backstrom takes control. The contrast gives us an opportunity to revisit Katie Carrera's article on Adam Oates' approach to offense from the defense. Once the Caps forwards are able to establish offensive-zone possession, maintaining that possession falls, to a large degree, on the defensemen. Oates described the defense's responsibility when the puck gets to the point:

"The puck can’t die there. The guys fight for it so hard in the corner, get it to the point, [the defensemen] need to buy time for the guys to get out of the corner and fight through the battles to get to the front of the net and that takes a period of time," Oates said. The defensemen have "to look up, control the puck and if the guys are there great. If not throw it back down. Make good decisions. They’ve got a lot of responsibilities there, it’s not that easy a play."

Schmidt doesn't have a play to the front of the net or to Green at the far point, so he makes the simple play and keeps the possession alive. Backstrom, Erat, Coburn, and Grossman battle for the puck in the corner until Coburn is able to reverse the puck back behind the net. Coburn wins the race to the puck (aided by a not-so-subtle pick by Grossman on Erat) and has an opportunity to clear the zone. Coburn passes the puck off the boards, but the puck isn't hit hard enough to clear the zone on it's own and is bouncing too much for Simmonds to control. Schmidt sees the free puck and makes a split-second decision to hold the blue line:

Schmidt makes a pretty unreal skate-to-stick play at the line and is able to swat the free puck over to Erat. The Flyers are expecting the puck to go up ice and when Schmidt makes the play at the point they're all caught out of position. Simmonds and Matt Read are skating the wrong way, Grossman, Giroux, and Coburn are taking their time up ice and don't get as high in the zone as the Caps' forwards. This leads to brutal gap control when the puck is turned over, giving Erat and Backstrom all the time in the world to make a play. Erat turns, takes a look, and puts the puck on a platter for Backstrom to blast over Mason's glove. Erat and Backstrom had only slightly less time to make that play than they would have if they were the only two players on the ice, and faced the same amount of defensive resistance. Meanwhile, Claude Giroux finally got to take a breather, with his shift clocking in at a healthy 1:56.

Just for fun, with a little cutting and pasting, this is how Giroux's shift looks via Shift Chart, with the Caps skaters who also were on the ice for part of that shift: 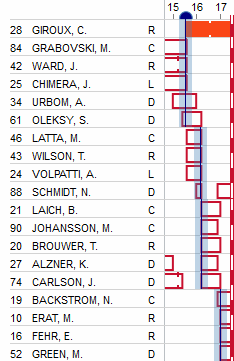 Go ahead and count the Caps, we'll wait.... Yep, 18, which means that the only Cap who dressed and didn't get on the ice during Giroux's marathon shift was back-up goalie Michal Neuvirth.

Anyway, the Flyers got out of the first period without letting in any more goals, but the Caps came out in the second period just as they left off the first. Between the Caps' ability to seize momentum and the Flyers inability to muster any kind of respectable response, this was the last time the game was even close.