Japers' Rink Mailbag: Laich's and Brouwer's Possession Woes and What to do with Dmitry Orlov

A look at second-line suck (in the astrophysical sense of the term), and Dmitry Orlov's need for on-the-job training in this week's installment of "you ask, we answer."

Share All sharing options for: Japers' Rink Mailbag: Laich's and Brouwer's Possession Woes and What to do with Dmitry Orlov

Our first question this week inquires about the giant sucking sound emanating from the second ("second") line:

@JapersRink Has Brouwer and Laich always been puck possession black holes or has it started this season?

In terms of puck possession, Troy Brouwer and Brooks Laich can probably be fairly considered "passengers" in that neither one is likely to drive possession numbers (at least in a good way) on his own. Take Brouwer, for example. From 2008-2013, he had a Corsi-For percentage of 52.6% at five-on-five. That's very good. He's impressively on the right side of 50% when skating with Duncan Keith, Patrick Kane and Jonathan Toews - great players on a great puck possession teams - but in the red when skating with every single Capital with whom he's shared the ice for at least 120 five-on-five minutes.

More distressing? Nicklas Backstrom and Alex Ovechkin each saw a spike of more than four percentage points in their CF% when playing without Brouwer (often with previously notoriously bad possession player Marcus Johansson). For Backstrom, the difference between playing with and without Brouwer has been the difference between being a strong possession player (53.8%) and a weak one (47.2%), and the results couldn't be much more stark - when Backstrom was on the ice without Brouwer at five-on-five, 56.1% of goals scored went into the opposing net; with Brouwer, that number plummeted to 42.9%. That's... not good.

Another way to look at Brouwer's even-strength play (recall that he has just one point at evens so far this season) is to compare his individual shot production over the years to what's happening when he's on the ice. Graphically, it looks like this: 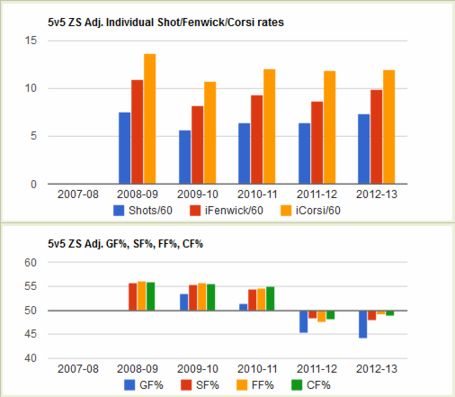 Interestingly enough, Brouwer has been doing what Brouwer does with little change in his individual rates, but the team around him has seen its possession tank. That's obviously in large part due to the system (and personnel) differences between Chicago and Washington, and also how Brouwer has been deployed. 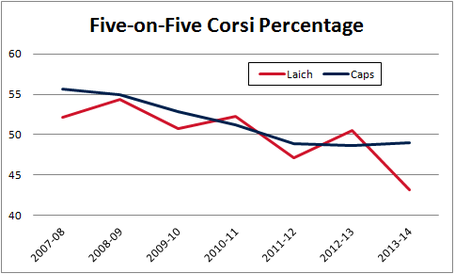 Is Laich driving that decline? Brouwer? Of course not. No one player is. No one line is (though this year's second line seems to be trying to). But over the past seven seasons, Laich and Brouwer each have six seasons of 20 or more games played, and they've out-possessed their average teammates three times (Laich twice, Brouwer once). Put them together and it's been terrible this year (though not nearly as bad in prior years), as the Caps are at 43.8% CF% when the two are on the ice at five-aside. Then again, considering that Laich is at 40.2% without Brouwer and Brouwer at 36.8% without Laich, it's possible they're making each other... better? Scary. Anyway, consider deployment and roles (here's this year's usage chart), but those are the numbers.

The bottom line here is that neither Laich nor Brouwer is going to produce good puck possession numbers on a line that's ill-equipped to do so, and that's precisely what you've got when they're constituting two-thirds of a trio. They need to be separated - and the sooner it happens, the better.

Our second question asks about getting a still-young blueliner some more NHL experience, and we'll let Rob take this one:

@JapersRink In no way would Orlov be a pancea, but if Wilson is up here so he can learn the game, why not Dima? #JapersMailbag

The biggest reason Dmitry Orlov won't be used to learn on the job in the NHL is that he plays defense rather than forward.

It's easy enough to hide Tom Wilson with ten minutes a night (or fewer) in carefully managed situations. It's much harder to do that with a defender. If the Caps tried to play Orlov only ten minutes a night (or fewer) that would put a huge burden on the rest of the defense, especially now that Mike Green is (once again) injured. The defense is already rather inexperienced with rookie Nate Schmidt playing in a top-four role, Steve Oleksy in only his second NHL season (and having fewer than a full season's worth of games under his belt), and Alexander Urbom also in his first NHL season (he had one game with the New Jersey Devils prior to joining the Caps).

That means that trying to shelter Orlov would force inexperienced players into higher minutes, frequently meaning tougher minutes, and/or forcing John Carlson and Karl Alzner to start playing 30 minutes a night. Both of those guys can do that - but it's not optimal, especially so early in the season. So from a pure utilization standpoint, letting Wilson learn on the job has less impact on the rest of the lineup than letting Orlov do so.

Then again, they could just hand him Urbom's minutes and keep things pretty status quo... which hasn't been particularly good of late.

On top of utilization, though related, is the question of how best to develop a player's skill set. Wilson is so raw that working with Adam Oates in practice and then trying to apply his lessons in minimal game time is still going to allow him to improve his skill set (though it is debatable whether this is the ideal approach to player development). Orlov has already played professional hockey (65 games in the NHL and another 83 in the AHL), so the coaching staff already has a good sense for how he stacks up. Trying to prevent NHL forwards from scoring is difficult, much more difficult than what Wilson is being asked to do (which largely boils down to not hurting the team and bringing a physical presence).

There are examples throughout NHL history of players that were "rushed" into the League and had their development set back because of the confidence issues that result when a player is put in over his head. Caps fans have talked about what could have been if the team were more patient with Steve Eminger. We'll never know how much of that is on the player and how much is on the team for their development choices, but it's certainly a concern. Add in that Orlov seemed tentative following his return from concussion and it makes sense to let him return at a conservative pace, learn the system's in and outs, and then start to let him play in the NHL when he's ready to handle NHL minutes against NHL competition.

He's been called up recently, but hasn't gotten any ice time, so for now it seems the Caps' coaching staff wants to continue to work with him during practice and then let him apply his practice against AHL competition. It's not time to give up on the kid, but we need to temper expectations and be patient with his development. It doesn't look like he'll be an answer to the Caps' search for another top-four defenseman during the 2013-14 season.