Capitals vs. Penguins: A Rivalry Renewed

Looking ahead to tonight's Caps-Pens game - the 201st regular season meeting between the two clubs.

Share All sharing options for: Capitals vs. Penguins: A Rivalry Renewed

Tonight marks the first meeting of the year between the Capitals and Penguins. And while it's only November, tonight's game is a big one, with the two teams battling it out for first place in the oh-so-impressive Metropolitan Division.

It's not just the first time the two teams will face off in the 2013-14 season, of course. It's also the first time they'll face off as Metropolitan Division rivals, almost twenty years removed from the last time they shared a division - a reunion of sorts, two decades after the Patrick Division's final days but a rivalry still as fresh and heated as ever thanks to the emergence of dueling superstars in a post-lockout era and underlined by a spectacular playoff showdown in 2009.

And so it continues tonight, with the 201st (regular season) edition of Caps vs. Pens... 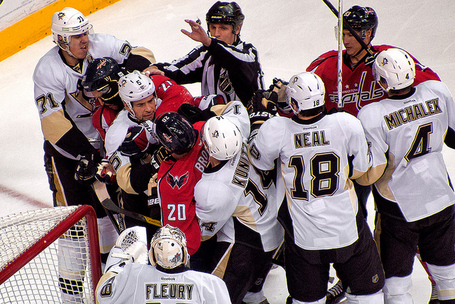 Roots of a Rivalry

The two teams first met back on November 16, 1974 in Pittsburgh - the 17th game of the Caps' inaugural season and the start of a home-and-home series with the Pens that would see the Caps fall by a combined two-day score of 14-1. Their first meeting as division rivals, however, wouldn't happen until seven years later, when the Penguins moved into the Patrick Division at the start of the 1981-82 season. After some early dominance by the Caps that saw them lose just 11 of the 36 games the two played over the first five seasons, the rivalry started to even out and take shape, Washington holding a slight edge by the end of the Patrick Division era with a record of 42-37-6.

But as we all know, it's not in the regular season where true rivalries are built.

Time and time again the Caps have faced Pittsburgh in the playoffs... and time and time again have been subjected to heartbreaking loss. So far the two teams have played eight playoff series (feels like more, doesn't it?) with the Caps coming out on top just once, despite having a lead in seven of the eight series. And it's where the mutual hatred between teams - and between the fans - was molded. From the first series in 1991, one that preceded the Penguins' first Cup win, to the multiple overtime winner off the stick of Petr Nedved, to the vicious back-to-back series in 1999 and 2000, to the collapse on home ice in Game 7 in 2009, the playoff misery is one of the things that defines the Caps-Pens relationship.

Of course, that's not the only thing that defines it - and since the League's return from the 2004-05 lockout, the biggest element of the rivalry (at least as far as the media focus is concerned) has been the ongoing battle for superstar supremacy between Alex Ovechkin and Sidney Crosby.

As overplayed as this angle has been over the years, it does have some basis in reality and shouldn't be overlooked simply because it's drilled into our brains every time they meet. After all, the two were seen as the saving grace of a League in shambles when they came onto the scene as rookies in 2005-06. They each lit the NHL on fire in that first season and finished one-two for the Calder Trophy. They're once-in-a-generation talents and leaders on their teams - and while there may not be true hatred between them (beyond the pure annoyance of getting asked about the other on a near-daily basis), there's no question that the two are at their best when they're going head-to-head.

To date the two teams have met 31 times since Ovechkin and Crosby began their careers; Ovechkin has appeared in all of them, Crosby in all but six. Over that span their performances have been almost like a microcosm of their performance against the League as a whole - Crosby holding the slight edge in points, 43 to 40, with Ovechkin leading the way in goals-scored, 22 to Crosby's 14. And what makes a game like tonight special is that, for the first time in a long time, they'll go up against each other healthy and at the top of their games (and near the top of the League), as each has put up huge numbers to start the season.

Of course, that's not to say that their battles are merely centered around offense...

The battles between the two teams have often been as heated and tightly contested as the battle between their now-captains. Since Ovechkin and Crosby arrived on the scene, the Caps and Pens have been on a similar trajectory (albeit not a smooth, straight one) from rebuilding team to contender (albeit only one team actually winning the Cup) - and the games between them have mirrored this, with each team claiming lengthy winning streaks over the other before the ice tilts back the other way. First it was the Pens, taking nine of the first ten games, then the Caps taking eight of the ten that followed; in the last eleven it's been split, the Pens winning six and the Caps winning five.

It goes far beyond simple wins and losses, though. During that span there have been highlights (and a few lowlights) that mark a new era . The Winter Classic with its beauty and drama and misfortune, the renewed animosity between the teams played out in stunning high definition during the preceding 24/7 series. The dueling hat tricks of the 2009 playoff series. The race for the Calder in 2006, the race for MVP in 2013, the bulletin board fodder and warring fanbases and great saves and greater goals... the rivalry may not have the spark it once did, but games between these two teams are never dull.

This season it takes on even more meaning, with the Caps and Pens clashing as division rivals for the first time in the 21st century. Heading into tonight's contest, the two teams are locked in at the top of the Metropolitan (which, granted, isn't all that impressive at the moment) and sport almost identical records - the Pens starting the season red-hot before cooling of late, the Caps doing the opposite, and a single point separating them for the division lead. All shaping up to make this one a bit more than just any other game, for sure...

Needless to say, any meeting between the Caps and Pens always goes well beyond just the two captains, and each roster is littered with players who have plenty of experience with this particular matchup. Of the current rosters, a combined 35 players (18 Pens, 17 Caps) have appeared in at least one game in this ongoing rivalry. Here's a snapshot of some of the most frequent flyers among them, and how they've done against their counterparts:

For all the players who have tons of experience in these meetings, however, there are a few first-timers - a few rookies and some free agent acquisitions who will get their first taste of what this rivalry is all about tonight, and make their own mark on it. Tom Wilson, Nate Schmidt, Michael Latta, Martin Erat and Mikhail Grabovski are just some of the players who will join Pittsburgh newcomers like Olli Maata and Matt D'Agostini in seeing it play out from the best seats in the house.

Welcome to the party, gentlemen.

Throughout the recent history of the Caps and Pens, goaltending has been something of a question mark for both... for very different reasons. The Caps have had a bit of a revolving door in net since 2005-06, with seven different netminders holding down the fort over that span, while the Penguins have mostly stuck with Marc-Andre Fleury, he of the Stanley Cup-winning performance one year and the sieve-like playoff showings in the years following. So far this season, however, both starting netminders are putting up sparkling numbers:

487,265 - Combined attendance for the 25 regular season games in which Ovechkin and Crosby faced each other