The Caps take it to the Flyers and wrap up the road trip with a decisive 7-0 victory.

After dropping their last two games out on the West Coast in disappointing fashion, the Caps headed into Philadelphia looking to finish their longest road trip of the season on a good note. And with Alex Ovechkin on the shelf with an injured shoulder, they would have to do so without their captain and top goal-scorer. Jumbled lines and a few call-ups in place, the Caps set out to do just that - and they succeeded, to the tune of a decisive 7-0 victory over the home team.

Ten more notes on the game:

So the Caps wrap up their road trip with a game that was out of hand in more ways than one by the end - but aside from the fisticuffs and other nonsense, they put together a decisive road win with a healthy second period and a strong finish to give themselves a much-needed two points. That and the fact that no one got hurt? A good night all around. Come on home, boys. 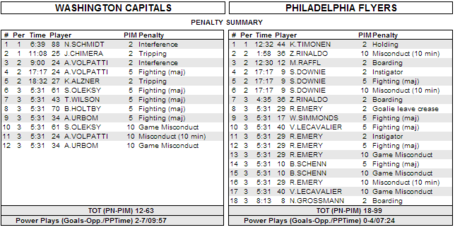