Japers' Rink Mailbag: Grabovksi on the Power Play and System vs. Personnel Issues

A look at Mikhail Grabovksi's role and effectiveness on the Power Play and the source of the defensive issues in this week's installment of "you ask, we answer."

Share All sharing options for: Japers' Rink Mailbag: Grabovksi on the Power Play and System vs. Personnel Issues

Our first (non-)question this week is about the Caps' second third-line center and his role on the power play:

What we're really talking about here is Mikhail Grabovski versus Marcus Johansson on the power play. Alex Ovechkin, Mike Green and Nicklas Backstrom are power-play mainstays (playing 56, 50 and 44 of the Caps' 60 power-play minutes so far, respectively), while Troy Brouwer and Joel Ward have played the trigger-man role in about a 2-to-1 ice time ratio. That's left Grabovski and Johansson to split time, mostly in the old Mike Ribeiro spot down low, and they've done so with Johansson holding a football-score-like 28-21 edge in minutes.

With that setup out of the way, here's a comparison between what the two have done so far (all stats are five-on-four and via Extra Skater and BtN):

So while Johansson's numbers are certainly respectable, Grabovski is pretty much blowing him out of the water, both individually and in what the team has been able to accomplish while each has been on the ice. Indeed Grabovski is first in the League in points-per-sixty at five-on-four (minimum six games played and 1.5 minutes at five-on-four per game) and third in goals-for-on-ice-per-sixty under those same parameters (with Nicklas Backstrom in the spot ahead of him). Not bad.

Of course, three of Grabovski's five points came in the first game of the season, with another coming in the very next game. Why the drop-off? Besides the inevitable return-to-earth of an unsustainably terrific power play, Grabovski has lost ice time on the extra-man unit to Johansson, in part likely due to each player's production heading in opposite directions, but likely due more to Grabovski's move to the third line. Here's a look at each of the players' five-on-four ice time and the Caps' power-play productivity, by game: 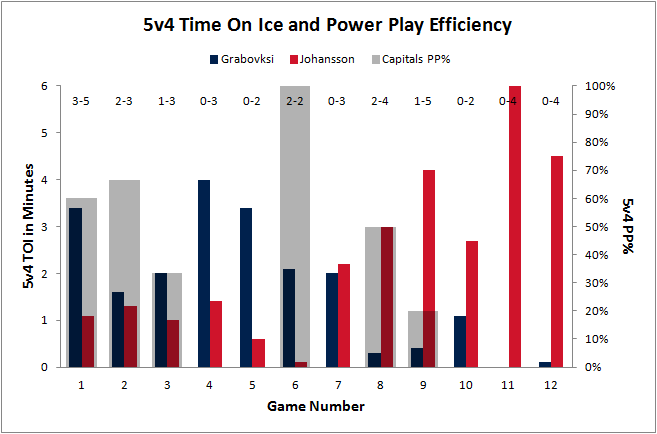 There's a dramatic shift in ice time here following the seventh game of the season (the 2-0 loss to the Rangers), and it coincides with Grabovski's move to the third line (which, not for nothing, has been tremendously successful). Prior to the Rangers game, Grabovski was getting big minutes on the top power-play unit; since then, those minutes have been Johansson's, as Adam Oates has usually been throwing his third line - Grabovski's - out for the first shift after a Caps power play. (Go check it out for yourself at ShiftChart if you don't believe me, but why wouldn't you?)

Anyway, if we call the Rangers game a wash in 5-on-4 ice time between Grabovski and Johansson, it's worth noting that the Caps' power play was 8-for-18 (44.5%) prior and 3-for-19 (15.8%) since, and it was averaging 2.66 shots on goal per two minutes of power-play time before and just 1.66 since. That's a little misleading (Johansson was actually on the ice for and assisted on two of the eight goals in the first bunch), but it's hard not to wonder if Oates is sacrificing sending out his best five-man unit for the power play in order to play an in-tact third line once it's over.

Our second question hits on the age-old question of system versus personnel:

In short, the answer to this question is "both." There are certainly "structural" (by which I take the question to mean system-related) problems with the team defense. Look at goals like the Daniel Sedin game-winner against Vancouver and ask yourself whether you could envision the New Jersey Devils, Los Angeles Kings, or St. Louis Blues letting an elite player walk down the middle of the slot and blast a puck past the goalie. Probably not, right?

The defensive breakdowns this season have been numerous and consistent; even more so if you consider the breakdowns that have led to odd-man rushes (breakdowns that traditionally occur in the neutral zone or offensive zone). As a team, the Capitals' defense needs to tighten up and prevent the kind of quality scoring chances that have become routine through the early part of the season. To some degree this can be addressed by improved execution of their defensive system: better communication, quicker reads and transitions between coverage, tighter checking. Better execution will help, but it won't solve the problem.

But part of the challenge in limiting scoring chances is personnel. Right now, the Caps have three players that are established, quality top-four defenders: John Carlson, Mike Green, and Karl Alzner. Even within that group, Green needs a strong defensive player on his left side if he is going to routinely face top-six forward competition (ideally one that is mobile and decent with the puck). Alzner can fit that bill, but then the Carlson-Alzner pairing is not an option, and that's the best combination for a true "shutdown pair" that the Caps could ice.

Nate Schmidt has shown some flashes, and looks to be a solid college UFA pickup, but he's not a guy that can or should be asked to handle top competition at this point. Alexander Urbom is young, has a frame that makes scouts drool, and has also shown some promise, but he hasn't really been an improvement on the incumbent. That incumbent, John Erskine, is a player on the wrong side of his prime with a track record that shows he's a serviceable bottom pair player, but is not the answer for a top-four defensive assignment. Dmitry Orlov has finally gotten called up to the NHL, but given the organization's apparently cool feelings on him, there's no reason to think he'll be in a top-four spot right away, and even less reason to think he'd thrive in it.

Every team needs defensive depth, including bottom-pair depth. It's nice that the Caps have that, but all the defensive depth in the bottom pairs can't cure a deficiency in the top-four. It's reminiscent of when the Caps had all the bottom-six centers they could handle, but no one to play in the middle of the second line - the back-end depth was nice, but with a glaring hole above it, it wasn't going to help get the team where they wanted to go. Similarly, until the Caps can upgrade their fourth defenseman, they'll continue to be defensively challenged, even if they improve the execution of Adam Oates' system.