If some troubling leading indicators can be fixed and... Pictionary (?) in this week's installment of "you ask, we answer."

Our first question this week focuses on predictive statistics, and it's Rob's for the answerin':

@JapersRink How are the Caps performing early on when it comes to key indicators of strong playoff performance? #JapersMailbag

@JapersRink Can the Caps fix their woeful 44.6% Fenwick Close? Can deployment get us over 50% or do we need a trade or two? #JapersMailbag

Given large enough samples, the numbers people generally use to help identify potentially strong playoff teams are the puck possession stats (which essentially entail counting shot attempts for and against), and the one that's currently most-favored is Fenwick Close - shots on goal and shots that miss the goal (but aren't blocked) when the game is tied or within a goal in the first two periods. (If you want to know why FenClose is so beloved, here's one explanation; if you want to know why "close" doesn't mean what a normal person would think it means, you're on your own.)

There are a couple of teams that aren't too far above 50% in that Cup-winner list, so it may be tempting to cultivate some optimism. However, the teams that look more like the Caps all had some extraordinary circumstances: The Bruins team that won the Cup got historically great goaltending from Tim Thomas. The Kings team got even more historically great goaltending from Jonathan Quick, and were at close to 60% FenClose following the trade that brought Jeff Carter to town. The Penguins team that won had a coaching change mid-season, and had a significantly higher FenClose under Dan Bylsma.

Turning our focus back to the Caps, a coaching change is almost surely out of the question, and while historically great goaltending is theoretically possible, it's never something that can be counted upon. A trade could certainly help the team, but if you're hoping another team is willing to take one of the Caps' worst possession players (as Columbus did when they took Jack Johnson off L.A.'s hands) and give them a solid possession player (like Carter)... well, don't hold your breath.

And while we're on the subject of a trade, we'll take a look at the second half of the question. As discussed, an impact trade can always swing the balance - but the Caps' front office hasn't shown much interest in bringing in core players (or moving out the current core players). So again, don't expect a Jeff Carter-type player to come back in any deal George McPhee might swing at the deadline or sooner.

Deployment could potentially help increase the Caps' puck possession, but it's not likely to have enough of an effect to make the team serious Cup contenders. With Alex Ovechkin already on a torrid start to the season, is giving him a few more offensive zone starts going to change the picture all that much? Probably not, and certainly not enough to combat the fact that the rest of the roster would then have to battle their way out of more defensive assignments.

Teams are also not going to simply let the Caps have the match-ups they want, even were Adam Oates inclined to aggressively match lines. On the road, opponents will have their say. At Verizon Center, teams are going to know that Ovechkin is going to take the ice in the offensive situations and they will be ready. Ultimately, any benefit to team Fenwick/Corsi that is experienced by goosing the top line may be given away by the bottom lines in their tougher assignments at worst, and, at best, would be addressing a symptom here and not the disease that is lousy puck possession. Bad possession numbers are a problem because of what they represent - bad possession, not because they aren't letting you squeeze out an extra Corsi or two by playing a top player in a higher-leverage situation.

The one way the Caps could potentially see some improvement in their possession numbers, barring a roster shake up (say, a new fourth defenseman) would be in the current stock of players refining and improving their execution of Oates' system (if we assume that Oates's system is one that, when executed properly, aligns with good puck possession, which is by no means a given... but is probably a topic for another post). There was clearly a learning curve with the system last year, and there was talk of the learning curve with the system while he was an assistant coach with the Devils... and it looks like there was an un-learning curve over the summer. Take a look at the rolling ten-game FenClose (regular season) since Oates took over: 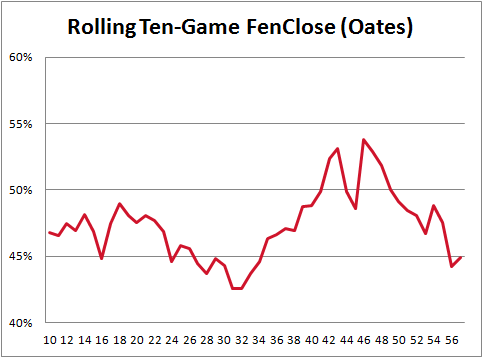 After bottoming out around 43% two-thirds of the way through the season, the Caps got it in gear and finished strong, only to give those gains back at the start of this season. Needless to say, having the eighth-highest PDO in the League in close five-on-five situations last year saved the Caps' bacon. (And if you're wondering why the chart has "Oates" in the title, there's a "Hunter" version right here, and one where they're both on the same chart because why not?)

Anyway, most of the current roster had last half-season to learn the system, and probably not coincidentally those are the players that have been playing well in general. Others like Martin Erat, Brooks Laich, and Mikhail Grabovski all had little or no on-ice experience with Oates' system last year, and given that Grabovski and Erat are historically very good possession players, it's not inconceivable that these players could pick up Oates' system, improve their play, and help move the needle to the Fenwick needle to the right side of 50% over the course of the season.

If that doesn't happen... get ready for a long regular season and a short post-season.

[Thanks to Red Army Line of Red Line Station for the ten-game FenClose data. Follow him on Twitter @muneebalamcu]

@JapersRink #JapersMailbag What player do you think would be the best at Pictionary?

Assuming that skills in the similar mobile app translate to the home game, that's an easy one - Alex Ovechkin. He can flat-out... wait for it... draw something.

[That's what you guys get for not giving us enough good questions...]