As Adam Oates's tenure approaches the length of his predecessor's, we take a look at each bench boss's contributions.

It wasn't so long ago that the back cover on a Capitals' season creaked closed following a Game 7 loss to the New York Rangers. No, not that one. The one before that, which, unbeknownst to us at the time, was also the final time that Dale Hunter would curmudgeonly drag his single threadbare suit and solid red tie behind the good guys' bench.

All in all, 60 regular season games (and 14 with the stakes raised quite a bit) were enough to make Dale say "enough already." And what a 60 games they were. From "Free Knuble" to clashing with the Captain on hockey philosophy to communication breakdowns across the board to the unexpected dethroning of the champs, it's no wonder the Hunter days still feel fresh— they were a negative narrative cornucopia (though the playoff series win was a pleasant punctuation mark). To sum the experience up in a single GIF... it was bad.

Enter another former Caps' captain-turned-bench-boss. Adam Oates is as different a coach from Dale Hunter as he was a player. Where Hunter kept his players in the dark, Oates has been by most accounts communicative as a morning bird. Where Hunter preached shot-blocking, Oates values self-preservation. Hunter wanted to prevent the first punch, Oates wants to deliver it. Where there was pessimism under Hunter, there has been optimism under Oates.

Adam Oates has now coached 56 regular season games from the Capitals' bench, making the respective bodies of work fair game for comparison. So how have the starkly-contrasting philosophies translated on the ice? Let's take a look at each coach's basic numbers:

Nothing we didn't already know here - Oates's squad both scores and yields more goals than Hunter's (though it's very much worth noting that Oates is on the happy side of goal differential, Hunter was not). Both coaches saw their teams, on average, outshot. And then there's the power play, where the improvement from Hunter to Oates was downright enormous... but more on that shortly. First let's take a look at some slightly more involved scoring and possession data: 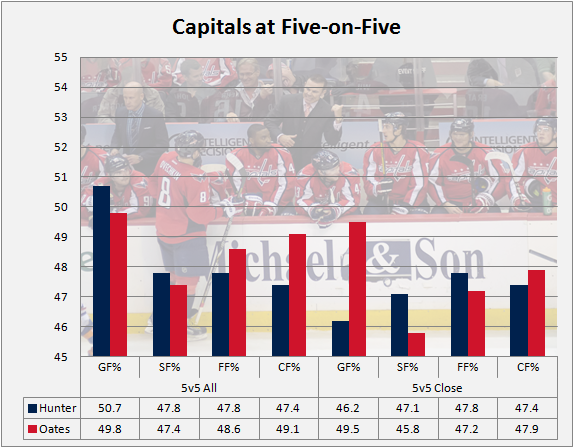 It's amazing, really, that such vastly disparate approaches to the sport have yielded such stunningly similar results. The differences in just about every even-strength possession and scoring metric, in all five-on-five situations and when limited to "close" situations, is negligible. (If there is an exception, it is that Adam Oates's team has a better scoring percentage in close situations, and even that difference in the most volatile of these metrics goes away with just three more goals for Hunter's shooters and three fewer stops for Oates's goalies). As for PDO and it's components, Hunter's Caps shot 7.9% at five-on-five (just 6.0% when close) and had a .930 save percentage (a whopping .938 when close); Oates's team has shot 8.1% (7.5% close) and gotten a .926 save percentage (.935 close).

Let's narrow this down a bit and have a look at some individual performance under both coaches.

Here's a look at the top three forwards, by ice time, who were coached by both Oates and Hunter (recall, of course, that Nicklas Backstrom missed a huge chunk of the Hunter Administration while he recovered from Rene Bourque's filthy headshot):

There are across-the-board (but modest) improvements here, and the early returns this year are even better... but not quite where they should be yet. To add context to the numbers, again recall that much of the Hunter Era stats here were compiled with Backstrom out of action, and just under half of last year's numbers came with Alex Ovechkin and Backstrom playing on different lines. It goes without saying that these guys make each other better (and Marcus Johansson has been a big beneficiary).

Interestingly - and somewhat surprisingly - Hunter actually appeared to lean on his top guys a bit more than Oates does. Less surprising is the fact that the top line is scoring more under Oates, to the tune of one goal every 22 minutes (when Ovechkin is on the ice), down from one goal every 32 under Hunter. With the top line getting upwards of 16 minutes of even-strength ice time per night, that's not nothing. Here's how the two coaches have impacted the top line's box cars:

Remember, Marcus Johansson missed 12 games last season. And how about that shooting percentage for Nicklas Backstrom under Dale Hunter?

Finally, what about the squad's top three defensemen?

Again, it's worth noting that Mike Green has been healthier under Oates than he was under Hunter. Then again, Green's underlying numbers under Hunter are better looking than they are under Oates (and as we've noted, his even-strength offense, at least as far as assist-production goes, has been shockingly non-existent). In fact, of the Green/Alzner/Carlson triumvirate, only John Carlson's numbers have improved at even strength (so maybe Green-Alzner wasn't such a great idea after all), and did so while being paired mostly with John Erskine or Jack Hillen. Huh.

So the wonky conclusion has to be that despite Dale Hunter giving Jay Beagle more ice time than Alex Ovechkin at times, and despite Adam Oates guiding Alex Ovechkin back to Rocket Richard level acclaim, it's the success of Oates's power play that has separated him from his predecessor, overall. In fact, by the numbers, it is just about the only thing that has separated him to this point... apart from a considerable advantage in the realm of dapper wardrobe selection.

But while Adam Oates's Capitals have notched a total of 52 power play tallies, they've also given up 39 of the same ilk, which translates to a difference of a one-goal advantage for the Caps, over the course of every 4.2 games - not much, and likely even less come playoff time (where Hunter does hold that 1-0 edge in playoff series won). While this is certainly a positive (and as the power play continues to produce the "unsustainable" arguments find less purchase), it will only go so far in masking the same even-strength deficiencies that plagued Oates's predecessor.

[Enormous huge thanks to Red Army Line of Red Line Station for providing a lot of the data in this post. Follow him on Twitter @muneebalamcu]