The Return of Semyon Varlamov

Tonight the Caps welcome back a goalie who has strong roots in DC, Semyon Varlamov

Share All sharing options for: The Return of Semyon Varlamov

When the Caps host the Colorado Avalanche tonight, it won't just be the first time the Avs have played in DC since December of 2010 - it will also mark the return of Semyon Varlamov, as he makes his first career start against the team that drafted him (and across the ice from the man drafted just 11 picks after).

Varlamov's professional hockey career in North America actually started with the Caps' AHL affiliate, making his debut for the Hershey Bears almost exactly five years ago when he got the start, and picked up his first win via the shootout, against the Norfolk Admirals. A few months later, with both Caps' goalies ailing, he got the call to join the Capitals and was tapped for one of the tougher assignments you could throw at a rookie goalie... a Saturday night in Montreal against the Canadiens. 60 minutes and 32 saves later, he had picked up his first NHL win in impressive fashion.

Varlamov would make the round-trip journey between Hershey and Washington a few more times that season before hip surgery for then-backup Brent Johnson put Varly on the roster for good. And after starter Jose Theodore struggled in Game 1 of the Caps' opening round series against New York, Bruce Boudreau made the bold decision to pull the veteran in favor of Varlamov for the remainder of the series.

After giving up just one goal in the 1-0 loss in Game 2, he picked up his first career shutout - regular season and playoffs - by blanking the Rangers...

...and displaying nerves of steel (or at the very least, a lack of English comprehension) in the face of the NHL's #1 pest:


A come-from-behind series victory over New York would set up an incredible seven-game battle with the Penguins that featured some great early-series heroics from Varlamov, including this incredible goal-line stop... on none other than Sidney Crosby: 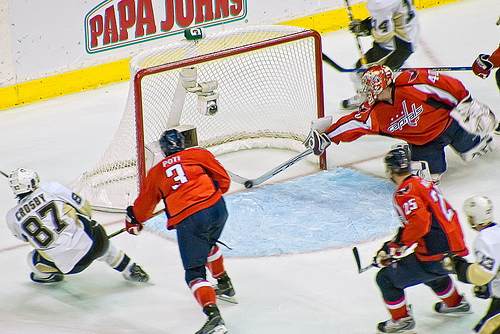 Stick Save Varlamov (via clydeorama)

Varlamov would go on to play two more seasons, and one more playoff series, with the Caps, before being traded to the Avalanche in the summer of 2011. All told his career in DC would stretch over 59 regular season games (including the Winter Classic in Pittsburgh) and another 19 in the playoffs, a combined record of 40-22-12 with 6 shutouts and a save percentage of .916.

And while he has already appeared in more games for the Avalanche than he did in his entire Caps' career, this will always be where he got his start, played his first game, earned his first win, got his first taste of the playoffs, and where he made his first NHL home.