Share All sharing options for: The Southeast Division's Top-10 Defensemen: 2012-13

Earlier in the week we discussed the Southeast Division's top centers and wings, now it's time to turn our attention to the guys who support - and stop - them, the rearguards...

Halfway through the Caps' famed eight-game losing streak in December, 2010 was a 3-0 loss to the Panthers in which then-bench boss Bruce Boudreau moved Alex Ovechkin from left to right wing in a desperate attempt to get the superstar winger away from... Mike Weaver. While that probably says more about the shambles the Caps were in at the time, the under-sized Weaver is a surprisingly effective defender... even if he's not the type you'd typically expect to game-plan against.

Flawed as plus-minus is as a statistic, it's worth noting when a stay-at-home guy ends up with a plus-12 rating on a team that was minus-143 (and does so without the aid of an absurd PDO). Gleason blocks shots and hits, but hasn't missed a game in two seasons, and is a bit more mobile than most give him credit for. Solid rearguard.

To get a sense of how good Alzner was defensively in 2011-12, the only other blueliners in hockey to face tougher competition (as measured by Corsi Rel QoC) who were on the ice for fewer goals-against per sixty minutes of five-on-five ice time were Ryan McDonagh and Nicklas Lidstrom (go by straight QualComp and Lidstrom drops off that short list). He's also proven to be durable (missing just one game due to injury thus far in his NHL career), and notched career highs in assists and points last season. And as good as his regular-season was, Alzner stepped his game up in the playoffs and was only on the ice for eight five-on-five goals in 14 games while consistently facing (and sometimes mocking) the most-skilled opposing forwards. He even chipped in a couple of helpers along the way for good measure, and in 24 career NHL playoff games (with an average ice time of 23:41 per game) has yet to commit a penalty. Alzner probably deserves to be higher on this list.

Based on his 2011-12 regular season, Carlson wouldn't be this high on the list; based on his 2011-12 post-season, Carlson wouldn't be this low. At just 22-years-old, Carlson still has his teachable moments, but all the tools are there in spades, and when the Caps locked him up for the next six seasons, they were making a pretty safe bet on one of the most complete young defenders in the game.

Carle may be a poor man's Ryan Suter (at James Wisniewski's cap hit), and should help a Bolts blueliner that could certainly use some. It'll be interesting to see what his role is in Tampa... and how well he handles it.

Smart, slick and skilled (i.e. stereotypically Swedish), Enstrom missed 20 games after breaking his collarbone and maybe never quite made it all the way back last season. But if and when he does get there, the smallish defenseman is a very capable two-way player and one of those guys who's fun to watch. He's missed double-digit games in each of the past two seasons, though, so perhaps the NHL game is, in fact, wearing him down some.

Despite a huge season offensively, there are still big questions about Byfuglien, including weighty concerns about his defensive play, which has yet to round into adequate form. Also, he's fat.

The numbers have been modest, perhaps even disappointing. But the 21-year-old Hedman, already a veteran of more than 230 NHL games, is on the verge of breaking out and establishing himself as an elite defenseman. In fact, the only thing standing between him and that lofty status may be his health, as the 6-6 blueliner missed 21 games a year ago, 13 of which were concussion-related absences.

The two-time Norris finalist started and ended the 2011-12 season playing the way fans have come to expect (and certainly even better in his own end than his reputation would have folks believe), but what came in between was an injury-riddled mess. The Caps are betting on his health (to the tune of $18.25 million) and, with it, a full return to form. Here's hopin'.

While he'll never be known for his defense, Campbell had a huge bounce-back 2011-12, finishing 2nd among defensemen in points, second in assists, first in power-play points and first in total ice time, all of which added up to a seventh-place finish in Norris voting. He also became the first blueliner to win the Lady Byng Trophy since 1954, which is... neat? He's not a "complete" defenseman, but certainly an impact offensive rearguard.

Finally, here's a usage chart (background here) for projected "top-four" defensemen (i.e. guys who will be in one of the top two defensive pairings) in the Division, with a few extra Caps thrown in... look for them on the bottom half of the chart: 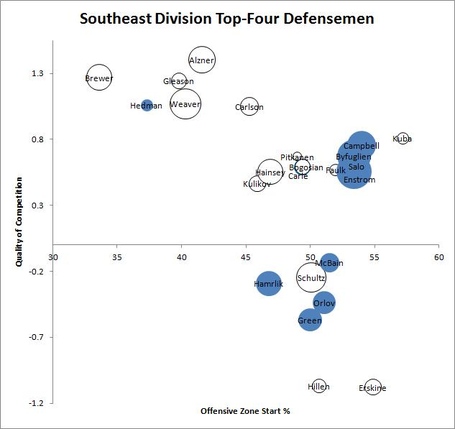