Share All sharing options for: The Southeast Division's Top-10 Wings: 2012-13

Yesterday we counted down the Division's top-ten centers. Today we'll take a look at the guys who flank 'em - the division's top ten wingers. And away we go...

Purcell took his career numbers set in 2010-11 and upped the ante across the board, chipping in seven more goals and 14 more points than he had in his first full NHL season. It wasn't just a strong year on a personal level; those 65 points were good enough for third-highest on the team, behind only Steven Stamkos and Martin St. Louis. Not bad company, that.

As part of the NHL's most productive trio, Versteeg established new career highs in both goals and points (narrowly edging out his previous highwater mark set back in 2008-09), was second on the team with eight power play goals and shared the team lead with three goals in the playoffs. And oh yeah, he did all that with a nagging hip injury. With the injury corrected during the offseason and a new contract in hand, expect Versteeg to continue to play a big role in Florida's offense going forward.

After an injury-shortened down-year in 2010-11, "Flash" found new life in South Florida last season, more than doubling his production from the previous year en route to career highs across the board (including in shots on goal, a mark he demolished). Part of that came with the territory of being a top-line guy by default on a Florida team lacking in offensive tools, and like the rest of that top trio he faded as the season went on, but he still led his team in every offensive category by the end of the season (and trailed a certain Russian former teammate by just four points).

After a couple of middling years with the Bruins and former Thrashers, Wheeler seemed to find his second wind when the team moved to Winnipeg, becoming the team's premier set-up guy with a team-leading 47 assists - a mark that also put him in the top-20 in the League, tied with Henrik Zetterberg. He put up some decent power play numbers as well, his six goals leading the team with the extra man and his 15 points trailing only power play guru Dustin Byfuglien's 19.

Ladd saw his numbers slip a little bit last season - and so he slips a bit in our rankings, as well - but he's still a dangerous scoring threat who has flirted with 30 goals in each of his last two seasons. The Jets' captain was "clutch" (if such a thing exists), his six game-winners tied for the team lead. And it wasn't just offense, either, because on a team whose penalty kill was bottom-five for most of the year, Ladd had one of the better GAON/60 shorthanded while averaging over a minute and a half of ice time 4-on-5.

Enigmatic. Talented. Head-case. Sniper. Whatever label you want to affix to him, you can add a new one to the list: Hurricane. In one summer Semin's gone from the ultimate Cane-killer, his 45 points against Carolina the most he has against any one team in his career, to a Caniac where Jim Rutherford and friends are hoping he can find some consistency. His talent has never been in question and he'll have great centers to get him the puck in Raleigh, a luxury that hasn't always been afforded him in DC - if he can focus, he's got a chance to replicate some of his great offensive seasons of the past.

Easily one of the better young talents in a division that's been chock full of them in recent years, Kane has future power forward written all over him. In just his third NHL season, Kane hit the 30-goal mark - tying him with the likes of Daniel Sedin, Patrick Marleau and Rick Nash - and is only going to get better.

Temper tantrums aside, if anyone's going to take away the "best young forward" crown from Kane it's going to be this guy, who at just 20 years old is already one of Carolina's best forwards. Skinner missed 16 games this season with a concussion and still managed to hit the 20-goal mark, just four short of team leader Eric Staal. With experience comes confidence - and he's got another year of experience under his belt, so watch out.

At 37-years-old it's clear that St. Louis is nearing the end of his storied career, and is starting to slow down a bit. For the first time in six seasons he missed a game - five, to be exact - and his point total was the lowest its been since the first post-lockout/post-Cup season of 05-06. And yet there's no question that he remains one of the division's elite scorers, with the capacity to burn opponents on a nightly basis... evidenced purely by the fact that 74 points is seen as an "off" year.

His numbers may not be as sparkling as they were in those heady first few years, but there's no denying that on any given night, in any given arena, Ovechkin can still pull out the moves, the plays, the goals that make him the special player that he is. Still the best... right?

Finally, here's a usage chart (background here) for projected "top-six" wings (i.e. guys who will be on one of the top two lines) in the Division, with an extra Cap thrown in: 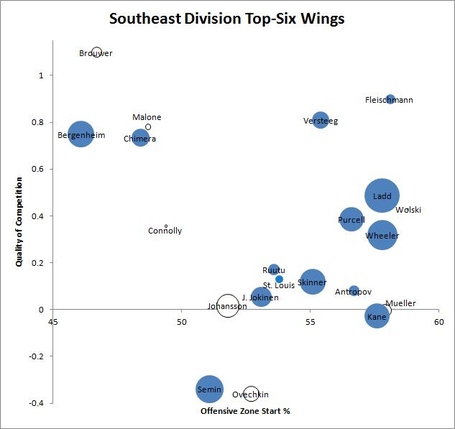