Share All sharing options for: The Southeast Division's Top-10 Centers: 2012-13

After a long summer away from hockey (that may soon become a longer fall away from hockey and then who knows...), it's always good to get a little refresher course as to the makeup of teams around the League, especially among division foes. To that end, as we have in the past, we'll count down the Southeast Division's top-ten players by position, starting with the the centers, a position the Caps (and some of their Southeast rivals) have upgraded in the offseason... but we'll get to that in due time.

Laich makes the jump from the "Wings" list to the "Centers" after taking more draws than any other two Caps pivots combined in 2011-12, and doing much of it against plus-competition (see below). That changing role explains, in part, his second-straight year of declining offensive totals and just 16 goals (after three 20-plus-goal campaigns in a row), as the Caps' Mr. Versatility also played every role from shutdown center to first-line defensive conscience. It will be interesting to see what Laich's role is under new coach Adam Oates, and if one of the Division's top all-around centers can bring a bit more offense to the table going forward.

Little spent most of 2011-12 as the Jets' top center and the former 12th-overall pick (2006) potted the second-highest goal and third-highest point total of his career. With Olli Jokinen added to the fold in the offseason, perhaps Little slots in as a second-line center in the 'Peg, where he's probably a better fit.

At even-strength Weiss got favorable zone starts (see below) and saw better than one in every ten Panthers shots find the back of the net when he was on the ice, yet was only good for half of an even-strength point per game over the season. Still, he's a solid two-way center, one of just nine to have 20 goals, 35 assists and a plus-5 rating in 2011-12.

For a guy who has had 50 or more points in each season since the last lockout (one of just 18 players who can make that claim), Jokinen sure doesn't get a ton of respect. Granted, he's played 1,042 regular season games in the NHL and appeared in just one playoff series, but that's obviously not entirely on him (and neither is any of the one, two, three awesome Internet memes he's inspired). And even though he faded down the stretch last season, Jokinen is still an impact player, and should help the Winnipeg power play as he returns to the Southeast Division. (Please, Mrs. Jokinen, no emails!)

The Caps finally addressed their lingering second-line center problem by trading Cody Eakin for Ribeiro at the draft. Since the last lockout, Ribeiro has averaged 45 assists per season, and the fact that his 63-point 2011-12 campaign is considered a disappointment tells you all you need to know about his offensive upside. Both the Caps and Ribeiro will hope that the free-agent-to-be rebounds, and a slot beside one of the League's biggest guns could help that along. Regardless of linemates, Ribeiro and Nick Backstrom give the Caps the best one-two offensive punch down the middle that they've had in recent memory (and perhaps since one of the two was Ribeiro's new coach... if not longer).

Lecavalier's lowest point total and per-game average in a decade are a little misleading here, as the 32-year-old (Really? That's it?) center was on a 30-goal pace before he broke his hand in February and ended up missing 17+ games for a second-consecutive season. But the injuries over the past two seasons are only a minor concern when compared to the fact that his points-per-game has dropped in five-straight seasons (from 1.32 to 1.14 to .87 to .85 to .83 and last year's .77), and last year's totals came with a five-on-five on-ice shooting percentage of 11.3%, a top-ten mark among skaters who played in more than 40 games. Still, he can put up points in bunches (like the 15 he had in an 11-game stretch last January), and may very well be in for a bounce-back year.

One of the better two-way centers in the game, the younger (but not youngest) of Carolina's Staals would have obliterated his career highs in goals and points had he been healthy all last season, but would have to settle for barely topping his best point total (by one) and falling short in goals. Oh well. Traded to the 'Canes on his wedding day (and thus getting not one but two new owners at almost the same time), Staal will get a chance to flex more offensive muscle... if he has it.

The elder Staal takes a ton of draws and skates a ton of shifts. And while each passing season now seems to corroborate that his 100-point 2005-06 was a fluke, he's still managing to lead a decent team in just about every offensive category and has only missed 14 games in his seven-year career. Hey, that's what we wrote last year... and it's still applicable. But look for a bump in production this year with some more high-end talent in town.

Backstrom was on a 28-goal/90-point pace before a filthy Rene Bourque elbow sidelined him for half the season with a concussion. His arsenal is pretty complete at this point (Playmaking? Check. Goal-scoring? Check. Responsible in all three zones? Check, check, check.), and the thought of Adam Oates imparting his wisdom upon Nick Backstrom has Caps fans salivating. At this point, the only thing that can stop Backstrom is his health, it would seem.

Stamkos may be not only the best center in the Division, but possibly the best in the game. His 60 goals in 2011-12 were ten more than the League's second-place finisher (the widest margin by a player not named Alex Ovechkin since Jarome Iginla in 2001-02), and his absurd 48 even-strength goals were the most by anyone since 1992-93. Yes, he had puck luck; yes, he made his own luck. He'll be hard-pressed to match his totals from last season, but then again, he's entering his 22-year-old season... you know, the age at which Ovechkin went for 65 and 112 points.

Finally, here's a usage chart (background here) for projected "top-nine" centers (i.e. guys who will be centering one of the top three lines) in the Division, with an extra Cap thrown in: 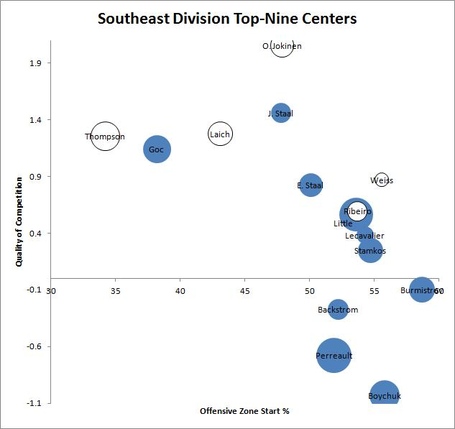