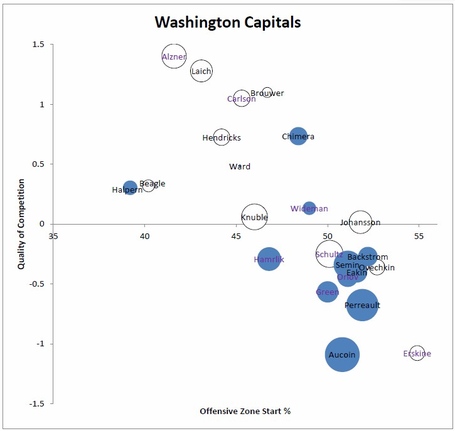 The chart above comes from Rob Vollman's latest gift to the hockey world, his 2011-12 NHL Player Usage Charts, which you can download - for free - here (PDF). But what is it?

You've seen us discuss "Oz Coke" before, and that's what this is. As Vollman describes it, "Player Usage charts show how players are used and how they performed at even-strength by mapping the percentage of shifts they started in the offensive zone (horizontal axis) against the average quality of their competition, as measured in attempted shots (vertical axis), with sized and coloured bubbles denoting how well the team performed with them on the ice relative to everyone else."

Back to the Caps, Rob asked me for my take on the chart above, and I had a few thoughts (below), but there's a lot more "there" there, so feel free to discuss what you see in the comments.

● First thing to note is that this represents the deployments of and performance under two different coaches, with roughly ¾ of the season coming under Dale Hunter after the last 22 games of Bruce Boudreau’s tenure.

● For Boudreau, it was Laich-Chimera-Ward getting the tough assignments and zone starts. Hunter put Beagle, Hendricks and Brouwer into the tough-minute mix, but part of that owes to the drastic change in possession numbers between the two coaches – the percentage of overall O-zone starts dropped dramatically under Hunter, and you can see it reflected in the fact that even the top O-zone start percentages here top out below 55%. For Boudreau, they were just under one more O-zone start than D-zone start per game at 5v5; under Hunter, they were around 4.5 more D-zone starts per game than O-zone.

● Aucoin and Perreault did very well in sheltered minutes. Erskine did not. And Halpern did fantastically in tough minutes. Alzner and Laich, too, for that matter, despite the negative Corsi numbers. For those two guys, those numbers were amassed in awfully hard minutes while learning and implementing a system that was either indifferent to puck possession or was simply unable to generate it particularly well. "Hunter Hockey" didn’t do a lot of guys’ zone starts or Corsi ratings any favors.

● There are two significant disappointments here in terms of performance, and those would be Ovechkin and Johansson, who got favorable zone starts and not particularly tough competition and were still beaten up in possession. Ovechkin used to be a dominant player in terms of possession, but has fallen off the table; Johansson is weak on the puck and makes bad decisions with it, but is still quite young. The common thread? Johansson spent a huge chunk of the season centering Ovechkin while Nicklas Backstrom was sidelined with his concussion. Whether the anchor was Ovechkin, Johansson, Hunter’s system, or, more likely, a combination of the three, it’s safe to say that Backstrom’s injury was fairly devastating to the team.

Thanks to Rob for including me in this project, and, more importantly, for pulling this together - hockey fans who read it will be better for having done so.