Get to Know the Bruins: The Power Play

Share All sharing options for: Get to Know the Bruins: The Power Play

Yesterday we took a look at what the Washington Capitals can expect from the Boston Bruins' penalty kill; today we'll take a look at the flip side and breakdown the Bruins power play.

The Bruins power play is about as meat-and-potatoes as it gets. The entire unit is built around finding shooting angles, getting the puck to the net, and crashing the net. For the most part it's easy to know what to expect from the unit, but that doesn't make it easy to stop. In general the Bruins like to use three men up high, one at center-point and then one at the top of each face off circle. They'll have two guys at the net, though their exact orientation will change depending on where the puck is. Frequently the weak-side high man will crash down low giving the Bruins three men by the net, and an opportunity for a back door pass. It sounds simple, but the Bruins are very good at moving the puck and moving their feet, players are frequently interchangeable and you won't know for sure where any one player will be, aside from the center-point man. Now that we've got an idea of how their power play works, let's take a look at how it plays out. The first power play we'll look at came from the third game of the season series, on March 10. Take a look, then join us after the jump to discuss it.

Right away the Bruins win the draw and get into their set up. Brian Rolston has the puck at center-point, Zdeno Chara is on the far faceoff circle, and Patrice Bergeron is on the near faceoff circle. There are two Bruins forwards down by the crease, with one guy just off camera with a Caps defender. 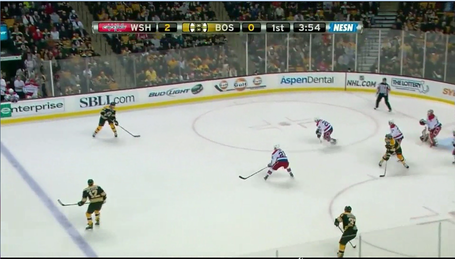 After the trio passes the puck back and forth a few times Bergeron will drive the net and take a shot. Tomas Vokoun gets a piece of the puck and then it goes to the corner. A mini-cycle by the two Bruins low-men and the Bruins have an open shot for Rolston right in the slot. 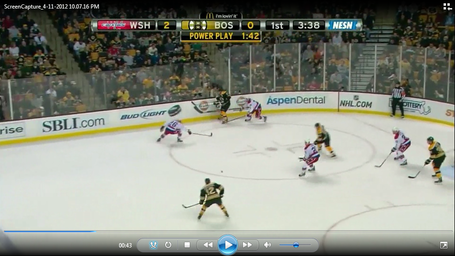 Thankfully, Vokoun makes the save and the Caps clear the puck. The Bruins break back into the zone and set-up again. 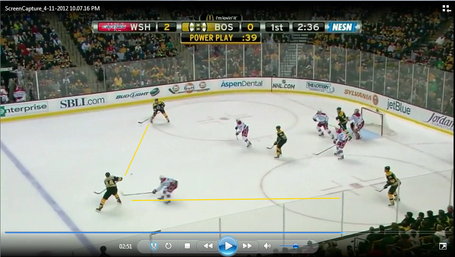 We see the three-man high set up again, but instead of having the two low-men right on the crease, we see them line up vertically. They are set for a high tip and a two-layer screen. You can see the weak-side D, Joe Corvo, cheating down lower in the faceoff circle. He's already had a great chance on this power play by pinching in low from his high position. A better hockey player may have already ended this power play. 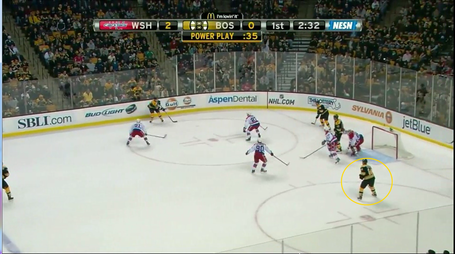 The puck is on the far side of the ice and none of the Caps D are close to Corvo. But if you look at the stick position of the two weak-side penalty killers you see they've taken away most of the passing lane so it would be difficult to get the puck to Corvo for an open back-door look. This good stick position is something the Caps will have to continue to be cognizant of during this series.

At the very end of the power play the Bruins demonstrate some great movement and it starts to pull the penalty killers out of position. We'll see the high-man on the strong-side drive the net, with the low-man on that side cycling up the boards to replace him. This kind of movement can pull penalty killers out of position, and the fact that all of the Boston forwards are comfortable moving around to the different power play positions is going to pose a challenge to the Caps. They won't be able to count on Brad Marchand or Milan Lucic or Bergeron being in one place on the ice. 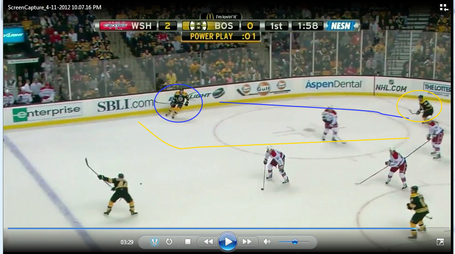 The yellow line represents the high-man's drive to the net, while the blue line represents the low-man's cycle up the boards. Yes, I'm an artist. As you can see, this movement pulls the penalty killers lower in the zone and opens up a ton of room for Dennis Seidenberg to shoot. The Caps manage to kill off this power play, though they did give up a couple quality chances (and another right after the penalty expired, for good measure). In the first game of the season series, the Caps weren't so lucky.

This time it didn't take the Bruins long to find the back of the net, and they had the Caps chasing for most of the (brief) power play. One thing that stands out is how aggressive the Bruins point men were at shooting the puck. Once they got a shooting lane, they took a shot. There wasn't a lot of playing around. 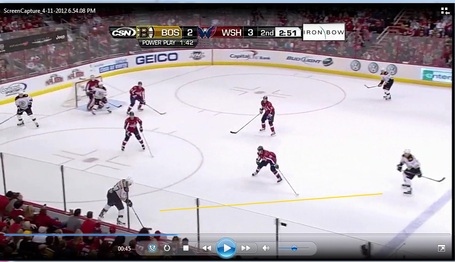 Right away, we see the familiar three-man-high set up. Bergeron is on the near boards, with Seidenberg at center-point and Corvo on the far side. You'll notice that both low-men are right by the crease, rather than set up vertically looking for the high tip. That's basically the extent of the variation the Bruins showed the Caps in their power play this season. 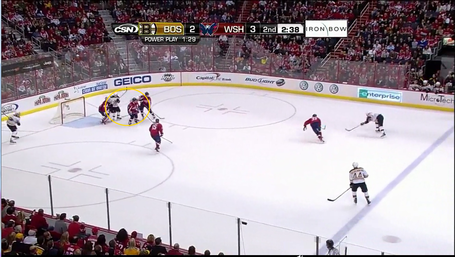 As with the power play above, Bergeron sends the puck down low and then drives towards the net. There are two Bruins forwards in the yellow circle on top of the crease, with the third forward, Tyler Seguin, off to the side looking for a backdoor pass. Corvo sees a shooting lane and puts the puck on net, forcing Vokoun to fight off a puck through traffic. After a couple of Corvo shot attempts, the puck ends up with Seguin in the corner. Seguin feeds Marchand behind the net, and here is where things break down for the Caps. 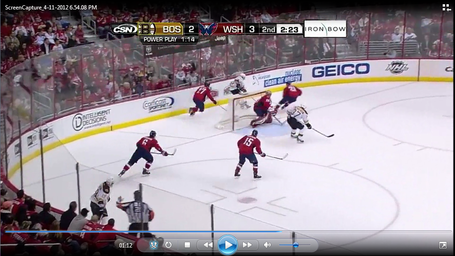 Marchand beats Karl Alzner behind the net, and then Brooks Laich commits to Marchand below the goal line. Already down a man, the Caps cannot afford to commit two men to one guy, much less a guy behind the net. Predictably, the Bruins have a man wide open in front of the net and Marchand hits him with a pass. Bergeron gets a quick shot on net, and Vokoun is forced to make a great save. 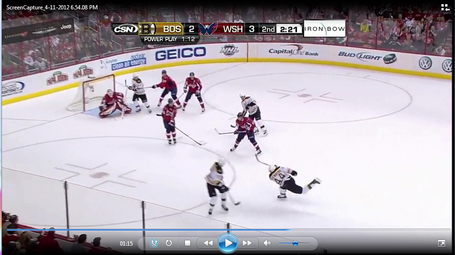 Unfortunately, the rebound kicks right to Seidenberg, who blasts a shot right on net. We can see Marchand has come around the net and has inside position on Alzner, just as Laich had in yesterday's post. Vokoun can't handle the rebound and Marchand taps in the loose puck.

The Bruins power play is not incredibly complicated. It's predicated on quick passing, constant movement, and hard work. There's no magic to stopping them, the Caps will need to work hard to win the loose pucks, and they'll have to be smart about holding their positions, especially when the weak-side high-men drive down low. The Bruins are trying to create three-on-two situations by the net, and if the high penalty killers get drawn out trying to play the Bruins point men as they pass the puck back and forth, the Bruins will get the puck behind them and take advantage of the open space down low. If the Caps penalty killers don't put enough pressure on the point men, they'll bomb away throughout the power play and give the low forwards opportunities for rebounds. It's a tough situation, but it's not impossible. The above goal is the only power play goal the Bruins scored against the Caps this season, and that includes a five-minute major power play from Jason Chimera's boarding penalty. Still, putting this talented group up a man is playing with fire, so the best solution is just to stay out of the box, as always.