Get to Know the Bruins: The Penalty Kill

Share All sharing options for: Get to Know the Bruins: The Penalty Kill

The vast majority of any NHL game is played at even strength, and certainly the playoffs will be no different. That does not mean, however, that special teams are not important. Special teams can serve as powerful equalizers or give one team a decisive advantage, and can have an impact on the game disproportionate to the amount of time a game is played at special teams. We'll continue our week-long look at the Washington Capitals first-round opponents by breaking down the Boston Bruins penalty kill and trying to identify what the Caps have to do to swing that portion of the special teams advantage in their favor. As (significant) underdogs, the Caps will likely need to win the special teams battle to have a chance in this series.

One caveat on special teams, coaches are smart and are constantly adjusting to what their opponents do. Even in the following videos and screen captures, you'll see the Bruins making adjustments to counter what the Caps are doing. Expect more of the same over the course of this series. Most teams have more than one look they can use on the power play and penalty kill, so the Caps will need to be prepared for that.

The following breakdowns are taken from the season series between the Caps and Bruins, with three of their power play opportunities brought under the microscope (although every man advantage for the Caps was reviewed). The Bruins' penalty kill against other playoff teams from the East (specifically the New York Rangers, Pittsburgh Penguins, and Philadelphia Flyers) were also examined, and the system and penalty kill structure that follows were also used in those games... and when those teams succeeded against the Bruins PK it was by similar tactics.

Now for the breakdowns, after the jump.

The first power play opportunity I've broken down is from the first game between these teams this season (January 24). This power play was pretty ugly from the Caps, and they barely were able to maintain any offensive zone possession time at all. As always, first the video:

The thing that stands out from this power play is that the Caps were unable to get a clean zone entry. The Bruins were overloading one side of the ice and stopping the Caps' forward momentum at the blue line. 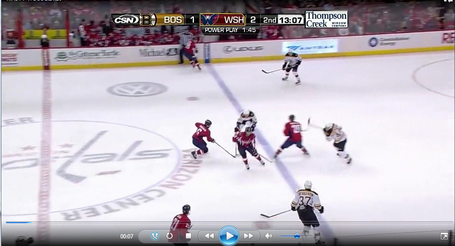 As you can see, there are three Bruins on one half of the ice and Dennis Wideman has skated directly into the pressure. No Caps player has any speed moving towards the Boston zone, and the Caps forward at the top of the screen is hitting the breaks just to stay on-side. The Caps turn the puck over and the Bruins dump the puck down to start the process over. 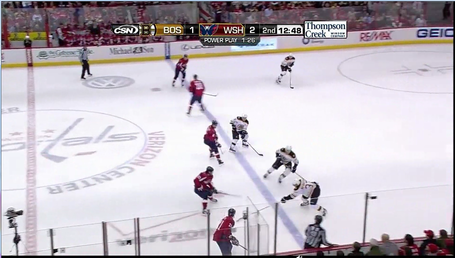 Again, we see three Bruins stacking the blue line on one side if the ice, and the puck carrier skating directly in to traffic. Mathieu Perreault tries to play the puck softly off the boards instead of dumping it deep, and the Bruins pick up the loose puck and ice it. It's probably moot, though, since no Caps player had speed to go chase the puck. 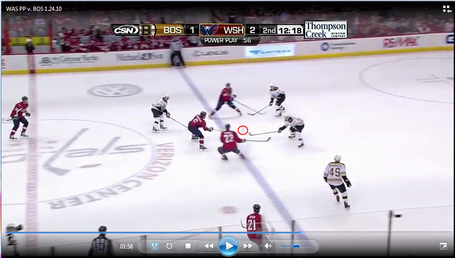 Again, the familiar "three men on the blue line on one half of the ice" formation is clear, and again the Caps forwards have to stop at the blue line. But this time Wideman dumps the puck to the corner while he still has forward speed (as much as he ever has) and he goes to retrieve the puck himself. this is the most zone time the Caps will get on this power play. They don't really get set up, and the Bruins once again clear the puck. 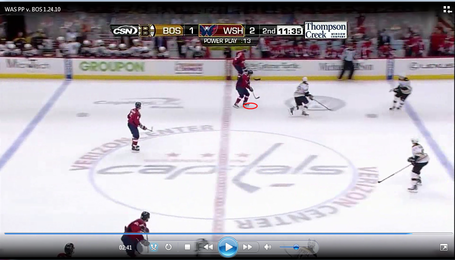 This time Wideman passes the puck before he hits the red line so the Bruins can't get the Caps stacked up. That's a smart decision. Unfortunately, he passes the puck to the side of the ice where the Bruins are over-loaded, and he puts the puck into the skates of his intended target. That's bad. With :13 left on the PP the puck gets turned over and effectively ends the power play.

In the next game (February 5), the Caps power play showed a little bit more promise. The Caps were able to maintain some zone possession and create some chances. Now we get a look at the Bruins D zone coverage on the PK.

The Caps lose the first draw on the power play, but Alexander Semin (!) and Troy Brouwer out-battle Zdeno Chara to help keep the puck in the zone. When the Caps get possession on the half-wall we see how the Bruins set up their PK unit. 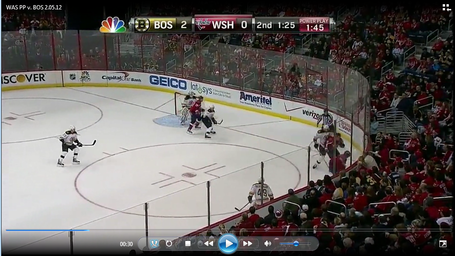 As with the zone entry situations, the Bruins overload one side of the ice. All four penalty killers are on the same half of the zone, and the high, weak-side forward is still coming toward the puck. He will end up in the faceoff circle, leaving the far side of the ice completely open. 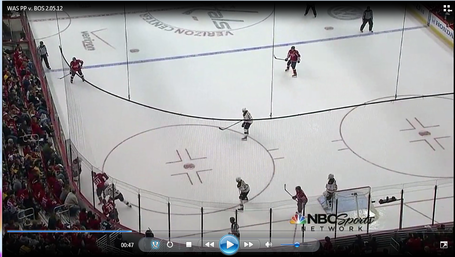 You can see how much open ice Alex Ovechkin has at the point, with all 4 Bruins on the same third of the ice. 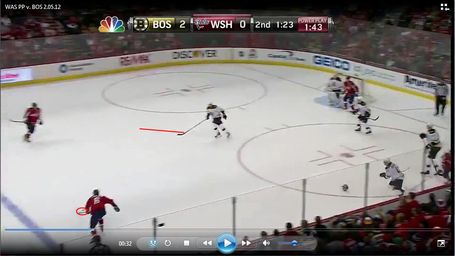 As soon as the puck heads up to Wideman you see the Bruins forward start cheating over toward Ovechkin. Part of that is because it's Ovechkin, but he also is aware that the far half of the ice is open and he wants to get out to cover a D-to-D pass. This leaves the whole middle of the ice open for Wideman to step in and take a shot. 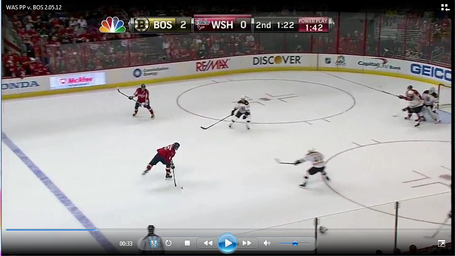 Wideman could probably step up a little more, but this is still a good look on a PP. The Caps have some traffic in front, but the Bruins D is in the process of pushing the Caps forward out of the way so by the time the puck gets there Tim Thomas has a clear view and there's no real threat of a tap-in even if there is a rebound.

After the faceoff the Caps get set up again. They work the puck around until Ovechkin finds Wideman on the far side, exploiting all that open ice. 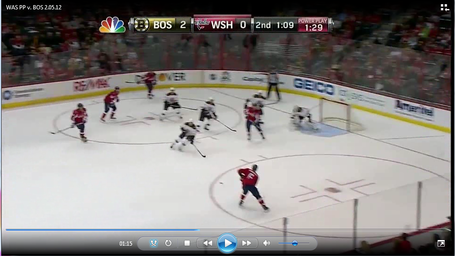 The Bruins, partially by design and partially just by how the play unfolded, have all of Wideman's passing angles covered. This allows Thomas to key in on Wideman and play him aggressively. 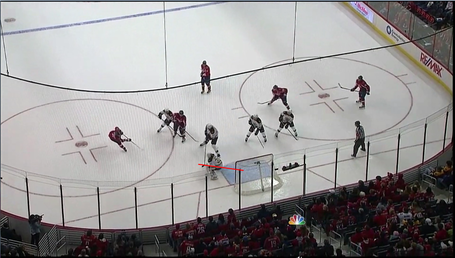 With no backdoor passing option to worry about, Floppy McDivesalot charges towards Wideman, not even under control. Because of his aggressive nature, Thomas is one of the few goalies that you may want to make an extra pass against, as it can lead to easy tap-in goals if you have the option. The Bruins D plays to this, though, and they rarely allow those kind of passes. It's a truly symbiotic relationship. Wideman's shot goes wide and the Bruins clear the zone, forcing the Caps to attempt another zone entry. 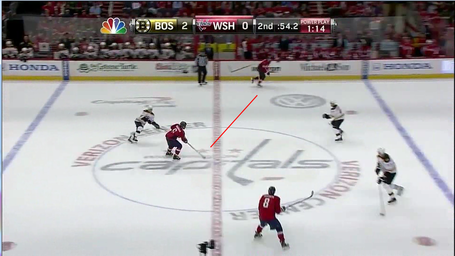 This time, instead of forcing a pass into the strength of the Bruins PK, Wideman hits the far side forward with open space, speed, and room to skate. The result is a quick and clean zone entry, allowing the Caps to get the PP back to work. 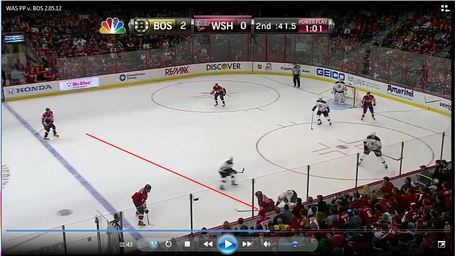 We see the Bruins PK all on the strong side again, and both Alexes have a ton of space on the weak side. Marcus Johansson finds Ovechkin at the point, but look at how much room Semin has down near the facoff dot. Ovechkin steps up and takes a shot, but the shot is blocked and the Bruins end up clearing the puck and running out the time on the period. The Caps didn't score, but the power play looked much more dangerous than their (sole) power play opportunity the first time the teams met.

The Caps power play continued to build on this success in the next meeting between the teams, on March 10. In this power play, the Bruins PK made a minor adjustment, but the Caps were still able to get some sustained pressure.

Greg Zanon gets called for roughing Perreault (something tells me this wouldn't be called in the playoffs, but I'm sure the Caps weren't complaining), and the Caps get right to work on the power play. The Caps win possession off the faceoff, always a good start, and immediately start working the puck around. 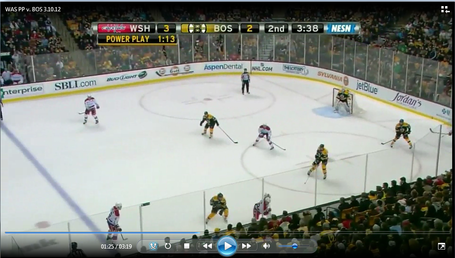 Unlike the previous PKs, look at how far wide the weak side PK forward is. He's in the middle of the ice, much closer to Ovechkin on the far point. After giving the Caps a few opportunities on the far side of the ice in their previous power plays, it appears Claude Julien adjusted to widen the PK box a little bit. The Caps move the puck around the outside. Notice how little time each player holds on to the puck. The players rarely hold the puck for more than a second, and when someone does hold the puck, it's usually one of the Alexes, the two guys you really want to have the puck on the PP. 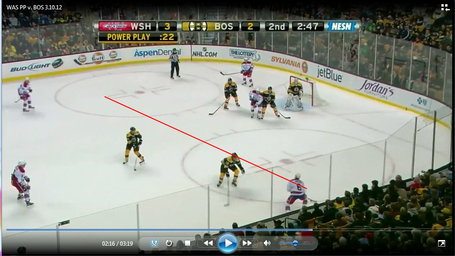 The wider PK box leaves more passing lanes, and Wideman is able to go cross-ice to Semin in the far faceoff circle. Passing through the box is generally a risky proposition (see Ovechkin's pass in the last game of the season against the Rangers. Ryan Callahan picked it off and went the other way for a shorthanded chance.), but with so much open room between the penalty killers, this is a pretty easy pass for an NHL player. 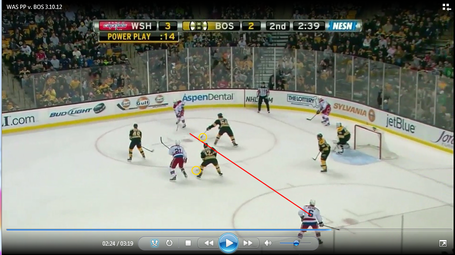 The Caps win puck battles throughout this power play, and that allows them to maintain zone possession and keep the penalty killers chasing. This continues to force gaps in the PK box and open passing lanes. This time it's Semin's turn to relay the pass to Wideman. Semin has a much more narrow passing lane, but if you look at where the Bruins sticks are, there is a clear lane for him to get the puck through. As good as Semin is, he makes this pass without much difficulty. 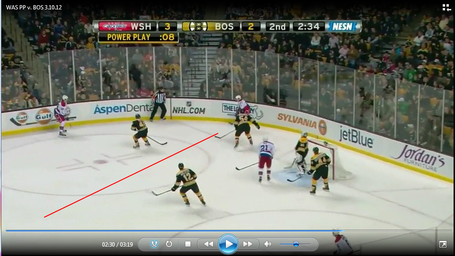 Wideman works the puck around behind the net, and eventually Keith Aucoin gets the puck in the far corner. Because of all the puck movement, and the looser Bruins PK box, there is another passing lane through the box up to Ovechkin at the point. Ovechkin quickly moves the puck over to Wideman and we see a similar set up to the previous PK, with Wideman set up to shoot down inside the faceoff circle. 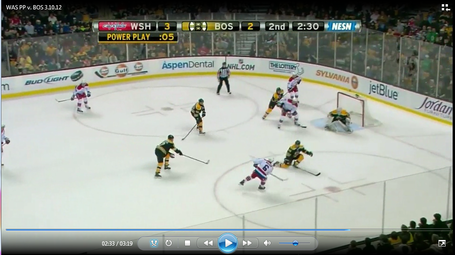 This time a Bruins defender steps out to try to block Wideman's shot, but the bigger difference in how this play unfolds is that the Caps have an open man for a backdoor tap-in. Brooks Laich's won position in front and he's ready for a pass or rebound. Wideman sees Laich and gets the puck through the defender, and the result is an easy(-looking) goal for Laich. It took almost the entire power play, but great puck movement and battling generated some great scoring chances, and they finally cashed in on one.

This was the only Caps power-play goal against the Bruins this season, but if you watch the power-play opportunities they had, they were able to generate chances fairly consistently when they had zone time. Aside from the first power play when they couldn't get in the zone, the Caps were able to challenge the Bruins PK. They'll need to do that throughout this series if they are going to win the special teams battle. The Caps only had six power plays against the Bruins in four games, and one wouldn't expect that to increase a whole lot in the playoffs, so they'll need to make the most of the chances they do get. And Claude Julien will undoubtedly make some adjustments to the kill, as there is no way he's happy watching the Caps pass through the PK box for up to two minutes. Whatever the adjustments are, the Caps will have to be ready and counter accordingly.