Breaking Down a Few Breakdowns

Share All sharing options for: Breaking Down a Few Breakdowns

"Turnovers. Missed assignments. Just not playing the situation. Goals tonight [were] a breakaway goal, a two on one. Those are easy goals. If you’re going to give up goals, you want to make them work for it. Drive through guys and have to scramble to score goals. We can’t just let them shoot pucks at open nets. We hanged Michal [Neuvirth] out to dry. He’s got no chance." - Brooks Laich, after last night's loss

Last night the Washington Capitals out-shot the Carolina Hurricanes 49-36, blew a two-goal lead, had to claw back to tie the game, and eventually lost in overtime. All in all, the Caps played a pretty good game, but little mistakes cost them a point in the standings that they couldn't afford to give away at this point in the season. Carolina deserves credit for converting on the chances, but these momentary mental lapses keep piling up and are killing the Caps. Against the 'Canes, each of the four goals-against came off odd-man chances, the kind of chances Dale Hunter has specifically tried to stamp out. After the jump, we'll take a look at what went wrong, and how it cost the Caps a valuable point in the standings.

The first goal-against was a huge turning point in the game. The Caps had just taken a 2-0 lead (doubling their first lead of the homestand) and were in position to take control of the game. But on the very first shift after the Jay Beagle goal, Carolina scored to get right back in it. Here's the video:
Jiri Tlusty wants to gain a clear, unimpeded path to the net. 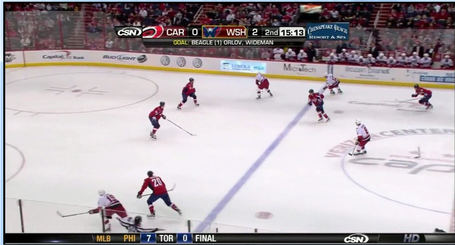 Troy Brouwer is caught looking at the puck... 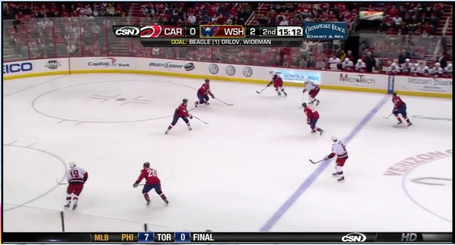 ...and Tlusty's gone; the 'Canes are back in the game.

A few minutes later Carolina had possession in the offensive zone, but the Caps had good coverage and the play was kept to the outside. Then a poorly timed switch left two Carolina forwards down near the crease with just Jeff Schultz defending. Chad LaRose picked up a fortuitous rebound off the end boards and put the puck in the open side of the net. Tie game. 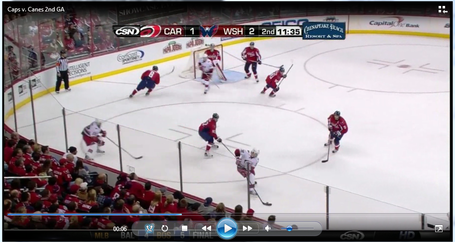 You can see the puck to the outside at the bottom of the screen. Mike Green has been covering Jussi Jokinen (36) since Carolina entered the zone, and will continue to follow his movement. Alex Ovechkin is curling to cut through the crease and head back to his point. Marcus Johansson is in the slot and Schultz is on the crease. Things look good.

The puck goes to the point and the Caps defenders on the strong side are playing loose D on their men. Ovechkin is just getting through the crease. The puck will move across the blue line to the far side D. 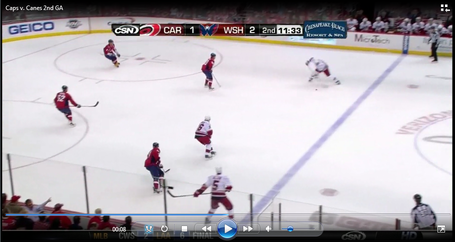 Ovechkin is in the faceoff circle, Johansson has picked up the D's shooting lane, Green is in the slot, 4 Caps in the picture and only 3 Hurricanes, great shape. Wait what? 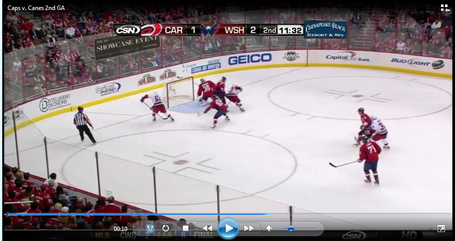 Yeah... four Caps and three 'Canes high in the zone means two 'Canes and one Cap low. Both Ovechkin and Johnansson head up ice to cover (noted offensive dynamo) Tim Gleason. Gleason gets the shot through, but wide, and a bad carom goes right to LaRose. The teams were equal again and the Caps needed to go get a goal. Unfortunately, right out of the gates in the third period, this happened:

Brandon Sutter is bearing down on Wideman and Brooks Laich is trying to cover Jeff Skinner in support. 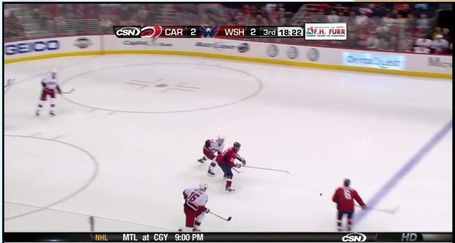 So Wideman tries to swing his stick at a bouncing puck to hit it back into the offensive zone. 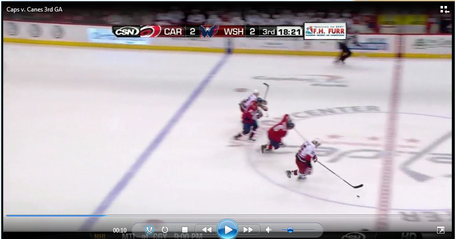 He misses. Sutter is gone. Here's what it looked like from behind the net. 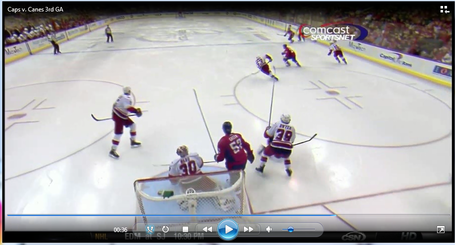 When Sutter is still at the tops of the circles, before the puck is right on him, Wideman has a chance to retreat and make the play a difficult-but-defensible 2-on-2 under duress. By opting for the baseball approach - the lower percentage play - Wideman made it an all or nothing situation, in which he got... nothing. And hung his goalie out. And the Caps were trailing by a goal in the third period.

The Caps ultimately tied the game on a nice rush from Laich and Johansson, and the Hurricanes were able to end the game in overtime by converting on yet another odd-man rush, this time with defending national champion Justin Faulk putting the game away. The game-winning goal was the product of a bad bounce as much as anything, but the three regulation time goals were all primarily the products of mental mistakes, and despite out-shooting and out-chancing Carolina, and minimizing special teams time, the Caps didn't pick up two points at home against a weaker opponent.

Mistakes happen, but it's frustrating to see mental mistakes cost the team, especially in games they probably deserve to win otherwise. And especially at this time of year.