You've heard the phrase countless times, used it yourself on plenty of occasions, and wished your favorite team would do more of it. A lot more of it.

Going to the net for "dirty" goals has been a time-honored tradition in the NHL. Pretty goals make the highlight reels, but ugly goals count all the same, and the players who score them are described with words typically reserved for heroes and warriors from other walks of life. The traditional assumption is that large players who can impose themselves physically - taking a beating and standing their ground - are the types of players who go to the net and pot those dirty goals.

While these guys - the Dave Andreychuks and John LeClairs - certainly have left their mark (and had plenty of marks left on them) by going to the net, the game today also leaves room for smaller guys to crash the net. Unlike their bigger-bodied brethren who get the job done with brute force, the smaller players that go to these high-traffic areas need to use guile and timing to find loose pucks in high-percentage scoring spots. After the jump, we'll take a look at how one Washington Capital - one of the smaller players in the League - has been scoring dirty goals by crashing the net.

Mathieu Perreault is laughably listed at 5'10" (which might be accurate if the measurement was taken skates-on). Coming into this season, he had 11 goals and 23 points in his 56 career NHL games. His skill set - a small player with great hands and skating ability - would suggest a playmaker or power-play specialist who would be short on goals. However, this season Perreault has already scored more goals than he had coming into the season (13), and doubled his NHL point production by adding another 23 points. While Perreault has by no means become a shooter, only tallying 50 shots on the season through Friday, a look at his even strength shot selection (courtesy of some kind of ninja) can be instructive as to how he's been able to stay relatively productive: 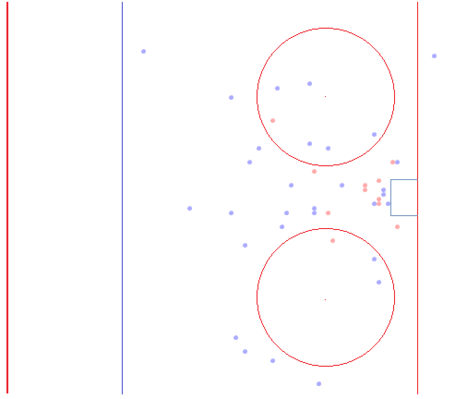 This chart shows 42 even strength shots, 30 of which are squarely in the "scoring chance" area. Seven of his eleven goals came from right on the doorstep. The shot- and goal-selection looks more like something you'd traditionally see from Mike Knuble, but Perreault has found a way to be effective in the high-traffic areas. Let's take a look at some of his recent goals to see how, qualitatively, he has managed to find the room to operate down by the crease.
The first goal is a relatively simple "drive the net" type of goal. Perreault finishes his check in the corner and then beats his man to the front of the net.

This is a fairly textbook play, and it helps that the backchecking Montreal Canadiens defender spaced out and made no attempt to cover Perreault. This is the kind of goal anybody on the team could score if they had the awareness to play simple hockey.

Up next we'll look at is Perreault's hat trick tally against the Boston Bruins. This goal isn't quite as simple as the last one; Perreault uses good timing to maintain space to operate and find a loose puck in front of the net. Here's the video:

When the play starts Perreault is down below the goal line near Dennis Seidenberg. 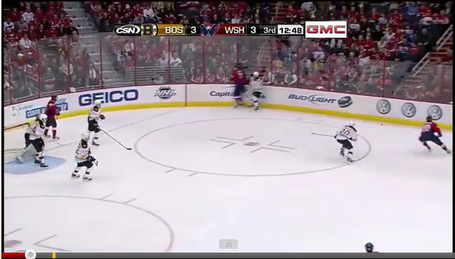 Perreault's play is tough to follow because some of it happens off camera, but you can see that as the puck goes up high in the zone Seidenberg goes to cover the front of the net. Instead of staying in Seidenberg's hip pocket and trying to beat him to the net and battle for position (a tactic a guy like Knuble would be more likely to employ), Perreault delays in the corner and lets the play develop. After Roman Hamrlik's great keep in at the blue line, Perreault drives to the net and slides in to the empty space behind Seidenberg, arriving just as the puck does. 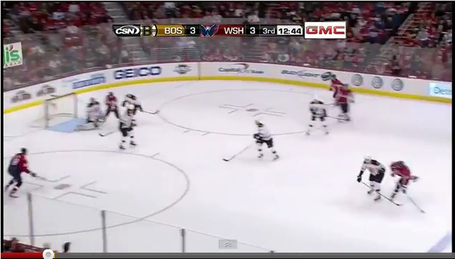 Instead of winning position with physical prowess, Perreault gets inside position with great timing. The rebound falls right to his stick and he ends up with an empty net tap in. 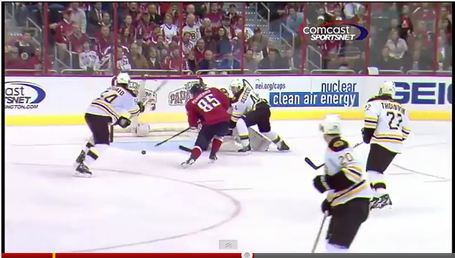 He won't score many easier goals than that.
The next example came against the Florida Panthers. First, here's the video: 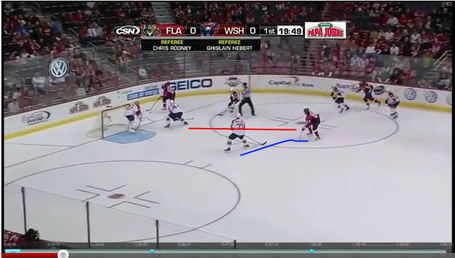 This leaves him room to operate, if he tried to fight through the D then the Panthers would be in position to tie up his stick when Chimera passed the puck. Instead, Perreault had just enough room to get a shot off, and the puck ended up in the net. 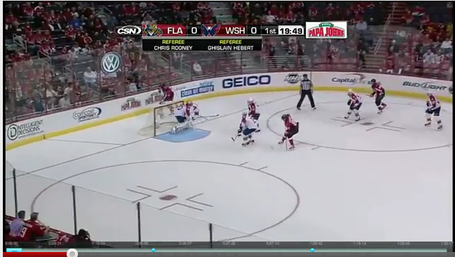 The next example comes in the recent game against the Toronto Maple Leafs.

As the play starts Perreault is skating down the wing with John-Michael Liles. Liles curls towards the middle as he hits the bottom of the circle (trying to pick up Alexander Semin after Mikhail Grabovski lets Semin beat him), but Perreault continues down to the corner and skates along the goal line. This helps give Perreault some open space to operate. The blue line is the path Liles takes, the red line is Perreault's path. 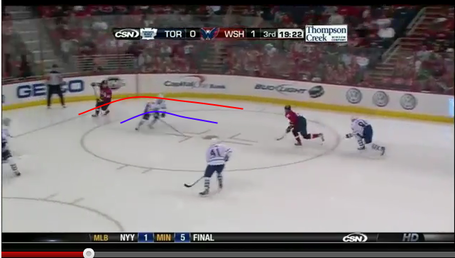 As Semin releases his shot, Perreault slams on the breaks to stay in the open space right by the net. It's a simple play, one kids are taught from the time they start playing hockey: don't skate past the net. Still, you'd be surprised how many times NHL players make this mistake. 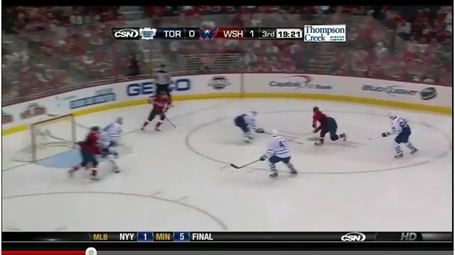 The loose puck skitters right to Perreault and he makes no mistake, burying the puck just under the crossbar. It's a simple play, but it demonstrates offensive savvy and attention to detail.

These are just four examples, and if you look throughout Perreault's NHL career you'll see several more, whether it's his two goals against the Ottawa Senators in his slump-bustin' effort of 2010, or his recent Tongue Goal. Perreault has been one of those guys that just seems to know how to get lost in traffic, and he'll need to continue that if he's going to have a long NHL career, in the interest of literal and figurative self-preservation. After all, he's not a big guy, but that doesn't mean he can't do some of the things that the big guys do.

Traditional net crashing is never going to disappear, it's always going to be part of the game. But today, as long as the new rule changes are enforced, smaller, highly skilled players, can also get the job done in the high-traffic areas. Big crease clearing defensemen can't just bear hug a smaller guy and prevent him from operating anymore. The upshot is that crashing the net should be a team philosophy, not left to one or two guys known for their physical brawn.