It's pretty well understood in the hockey community that much of what goes on during a game never finds its way onto the stat sheets. Even with the development of advanced statistics aimed at unearthing these "hidden" contributions (and their counterparts), some of the most impactful plays will go largely untracked and undocumented. Every once in a while, though, if you're paying close enough attention, you might catch some of these under-appreciated moments of productivity in action.

Sunday afternoon against the New York Rangers, Mathieu Perreault finished with a nondescript stat line: 15:05 of ice time, a plus-one rating and one shot on goal. However, a closer look at a couple of plays shows that Perreault was a key factor in both of the Caps goals. Follow along after the jump to see how Perreault was instrumental in facilitating what little offense the Caps were able to produce.

The first Caps' goal goes in the books as a slapshot goal by Alex Semin, assisted by Jason Chimera and John Carlson. The talk about the goal will (rightfully) focus on the blistering shot by Semin, the way Chimera used his speed to open up an entire side of the ice and then deftly dropped the puck for Semin to finish the rush. However, none of that ever happens without a simple, and subtle, contribution from Perreault. Let's take a look:

Despite losing the draw (with a little help from his friends), Perreault maintains solid position and supports Karl Alzner as Alzner battles for the puck along the halfwall. When the puck skirts loose, Perreault is right there to pick it up. Rather than panicking and forcing a pass along the boards, Perreault skates to some open ice and takes a look at his options. He finds John Carlson on the far side of the zone and puts a pass right to his stick. (These seem like simple things, the kind of things you normally don't think of complimenting NHL players for, but given how poor the passing was on Sunday, a good breakout pass really stood out.) By allowing Carlson to skate into the pass Perreault set the Caps up to head up ice through the neutral zone with speed. Carlson hit Chimera, heading up ice with even more speed, and the rest is history. The poise with the puck and accurate pass were the genesis of the entire play.

Late in the third period the Caps were trailing by two and hoping to make something happen to get themselves back in the game. After a neutral zone regroup, the puck once again ended up on Perreault's stick. Once again, Perreault showed poise and control with the puck. He gained the offensive zone and then held on to the puck long enough for support to arrive.

Perreault's ability to maintain puck control and slow things down allowed his teammates to join him in the offensive zone and let them establish a forecheck. In particular his work at around 2:37 bought the Caps an extra second, which may not sound like much, but is actually quite a long time on an NHL sheet of ice. 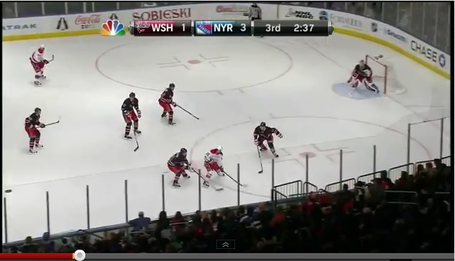 By drifting to the boards Perreault manages to pull two Rangers to him without letting them get on him until the last second, at which point he dumps the puck behind the net. Roman Hamrlik uses those famous wheels (ahem) to get in on the puck retrieval and cycles the puck down to Alex Ovechkin in the corner. Ovechkin's pass goes through the slot and finds Carlson alone at the point. Carlson's shot deflects off of Ryan McDonagh and into the net (let's be honest, McDonagh owed the Caps one) and the Caps had a shred of hope in the final two minutes of the game. Again, Perreault doesn't show up on the score sheet but that play never happens without his work gaining the zone.

None of this is meant to imply that this is the kind of stuff that you'll see from Perreault on every shift, and it's not meant to elevate Perreault over any other player; these are the kind of things Perreault will need to do regularly if he wants to stick in a top-six role with an NHL team. But there are precious few players that can get away without doing the little things. These examples are just meant to illustrate how the uncelebrated, simple plays factor into success in the NHL, and to highlight how a player can help his team without being rewarded in the box score.