Lessons From An Unsuccessful Power Play

Share All sharing options for: Lessons From An Unsuccessful Power Play

Back on December 20, the Capitals faced the Nashville Predators at Verizon Center. Around the midway point of the first period, the Caps were presented with a power-play opportunity when Blake Geoffrion got a little too frisky with Matt Hendricks in response to a hit in the neutral zone. The box score shows that the Caps failed to cash in on that chance, just another in a string of power-play failures, the tenth in a row at that point.

But despite the Caps' inability to get a puck past Anders Lindback, those two minutes were actually among the team's best with the extra man in recent memory (certainly one of the best since Mike Green was kidnapped got injured). Let's take a look at what the Caps did right (and wrong), after the jump.

First off, here's video of the entire power play, including Geoffrion's penalty to give the Caps their man-advantage:

The Caps had three top-notch chances on this power play, but were unable to score on any of them. And behind the flashy scoring chances was some solid fundamental execution - not necessarily the kind of plays that bring fans out of their seats, but the kind of plays that dangerous power-play units are able to execute seemingly by second nature.

The two-on-one is the most basic unit of a power play attack, the Amino acid of a power play. It may seem strange to view a power play as a series of two on one encounters, but that's how skaters are taught to attack penalty-killing units. Quick series of two-on-one attacks can pull defenders out of their structure and create high-quality scoring chances for the power-play unit. Let's take a look at how the Caps used their man-advantage to create two-on-ones across the ice, and then how those two-on-ones translated to scoring chances.

The first two-on-one we see comes during the zone entry: 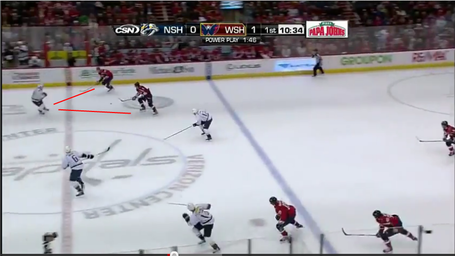 By isolating one defensive player against two attacking players the Caps have forced the defender (Ryan Suter) to back up and give up the blue line. This opportunity came because Nicklas Backstrom got a cross-ice pass to Alex Ovechkin while the Nashville forwards were still in the Caps' defensive zone. This kind of pass frequently will not be available so the Caps will have to work harder to create this kind of two-on-one; teams know that their opponents want to create the two-on-one for a zone entry, so they try to keep their structure tight and maintain support throughout the neutral zone. (Though it's not applicable in this particular instance, I'd be remiss if I did not note that a series of two-on-ones is a time-honored approach to breaking a neutral zone trap.) This is something we can only hope to see more of from the Caps. Unfortunately, when Troy Brouwer gains the zone and dumps the puck behind the net, Shea Weber beats the Caps to the puck and sends it back down the ice.

After the Caps retrieve the puck and gain the zone, we see the power play unit put more two-on-ones to work: 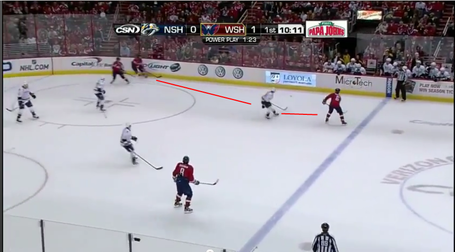 Dennis Wideman has the puck at the point and he's isolated the high forward. Marcus Johansson is the target of his pass. The play looks ugly at this point because Johansson tripped in the corner, otherwise he'd be a bit higher along the boards and showing better separation from Backstrom. Nevertheless, the pass connects and the Capitals continue to execute the power play. 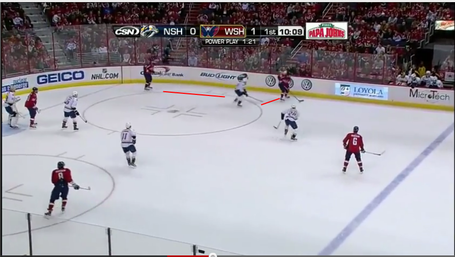 Johansson carries the puck up the boards and opens up some space in the corner for Backstrom. It should be noted that Suter is the defender covering Johansson at the half wall. 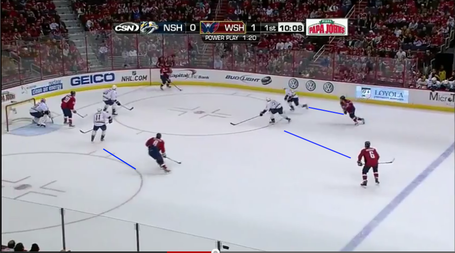 At this point, the play has developed and Caps fans can see the scoring chance staring them in the face. The blue lines represent the skating paths of the Predator penalty killers as they scramble to recover. David Legwand has crashed down to the net from the slot to cover Brouwer, Weber has left the front of the net to put pressure on Backstrom, Suter and the other Predator penalty killing forward were both pressuring up higher in the zone and now are booking it back down low to give some support. Alex Ovechkin? Standing alone in the middle of the slot. Backstrom hits him with the easiest pass he'll ever be asked to make and Ovechkin rips a shot on net. Anders Lindback makes a good/lucky pad save, but if Ovechkin keeps getting those chances, he'll bury more than his fair share. After the whistle the Caps bring out the second power-play unit to take a shot at doubling the team's lead: 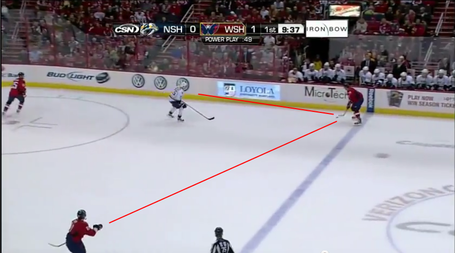 Here we see John Carlson with the puck at the point, and, because of relatively lax defending, he has the option to work a two-on-one either way - he has Jason Chimera down the boards or Dmitri Orlov across the point. A point to note is that, with good support, the puck carrier is presented with an option to pass to two players: if a defender commits to Chimera then Carlson will pass to Orlov, if the other forward commits hard to Orlov then Carlson will pass the puck down the boards to Chimera. In this instance Carlson passes the puck across the ice to Orlov. 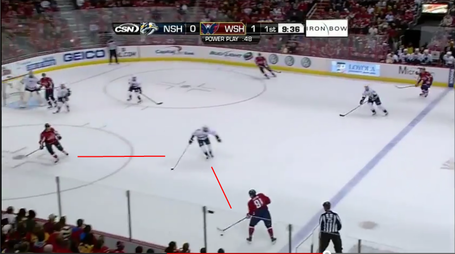 Orlov catches the pass and immediately sets up a two-on-one with Alex Semin. Orlov wastes no time and passes the puck down to Semin... 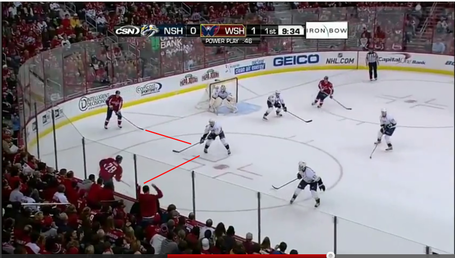 ... and Semin immediately sets up a two-on-one with Brooks Laich down below the goal line. Again, Semin quickly diagnoses the play and moves the puck to Laich. Before we move on, look back up two screens to when Carlson had the puck, I said that puck carriers are frequently presented with two options to pass and must determine which play to make. In this case, if the defensman slid down lower to cover Laich, and the forward slid down to play Semin, the two-on-one Semin would want to exploit would be with Orlov, not Laich. Because of how the play unfolded (Carlson-to-Orlov-to-Semin) there was no real opportunity for the forward to cover Semin, but it's something to keep in mind as you watch power plays this season. 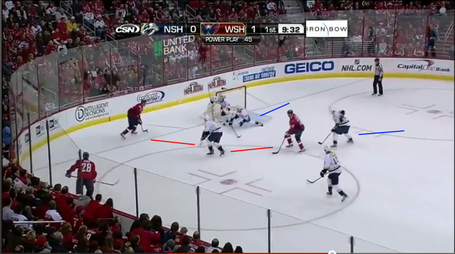 What does Laich do? You guessed it, he tries to set up a two-on-one with Chimera. The defensive movement makes this a bit trickier, though. The red lines represent the responsibilities of the defender Laich and Chimera are trying to isolate. However, the defender on the crease and the high, weak side forward both collapse across the box when Chimera moves to get open for Laich. The blue lines represent the movement of the penalty killers as Chimera cuts across the slot (definitely watch this play on the video again just to get a sense of how far Chimera skated across the penalty kill formation). Laich makes a perfect pass to Chimera who fires a one-timer on net. Lindback makes a good save, but because Chimera was able to drag both weak side penalty killers with him the entire far side of the ice is open. So open, in fact, that John Carlson is the only player on the weak side of the ice: 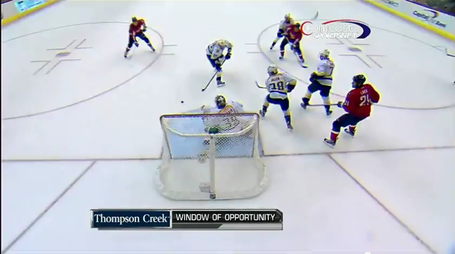 The rebound kicks right out to Carlson and the Caps are this close to a 2-0 lead. Unfortunately Carlson shoots the puck high and over the glass, but this play yielded two great scoring chances in just about a second. Like the first chance with Ovechkin, if the Caps can create these type of chances more frequently they'll score a lot of power-play goals.

Two things to note about this last sequence: in addition to the use of two-on-ones, the movement of both the puck and the skaters is exceptional. The puck starts on the far side of the ice at the point and gets moved across the ice, down the boards to the far corner, and then back up into the slot. At the same time Chimera starts on the far side, curls around the circle and then cuts across the slot. That movement caused the Nashville penalty killing box to lose its integrity and give up a wide open backdoor rebound chance.

At the same time, the puck movement was only successful because it was quick. The Caps made four passes in about five seconds, all tape to tape and to the forehand. We've seen the Caps standing around holding the puck looking for something to happen, but NHL penalty killing units don't break down like that. NHL penalty killing units break down with quick, precise puck movement. Any puck that goes into a player's skates or to their backhand, or worse a completely errant or bouncing pass, could have given Nashville the chance to recover their formation or to take the puck and get a clear. The margin for error is very small, and every pass that goes tape-to-tape on the forehand makes it more likely that a power play is going to be able to maintain possession and ultimately create a quality chance. In fact, for a counter-example, look no farther than the very end of this power play. First the Caps seem to have possession but the puck bounces over Wideman's stick at the blueline. Then, after the Caps re-gain the zone, Wideman is ready to tee up a one-timer from the top of the circle but the puck goes into his skate. Nashville recovers the puck and comes dangerously close to springing Geoffrion for a breakaway fresh out of the penalty box.

There were a lot of positives to take from this power play, but there was at least one major negative, too - there were two offensive zone faceoffs on this power play, and the Caps lost both of them, affording Nashville a couple of quick clears. Those two lost draws killed about thirty seconds of the power play; that's one quarter of the power play lost just trying to retrieve pucks and gain the zone after a lost faceoff (and that's with the Caps having a relatively easy time gaining the zone after both lost draws; if the penalty killers had frustrated the zone entry that, lost time could easily push up to around a minute). It only stands to reason that a power-play unit is going to be much more successful if they can keep the puck in the offensive zone for more of the power play. There's no easy fix for this, but it's definitely something to keep an eye on. (For what it's worth, the Caps had won 50.6% of their power-play face-offs entering Monday night's game - good, but not great.)

The Capitals are currently sporting a 19.3% power play, which puts them in the top ten in the NHL (and they've actually got the best home power play in the League). If the Caps can continue to execute on the power play as they did on this particular instance, they should be able to stay in that top ten cohort given the talent they have in the lineup (and if Mike Green ever returns for more than a game or two it could be a downright scary unit...). The Caps didn't have any success on this power play against Nashville, but they showed positive signs, and at this point in the season the process is as important as the results.