Even though Caps training camp hasn't yet opened and the start of the season is still a few weeks away, the roster with which the team will enter the 2011-12 campaign has been more or less set for a while now. The competitions that do remain are largely for playing time and role (second-line center, perhaps), though there should be some jockeying among the last few forwards (as the team has more bottom-six front-liners than spots for them), and at the back-end of the blueline, depending on health.

With that in mind, there's been some recent speculation as to the team's potential line combinations and reading of tea leaves as to how players are listed on the training camp roster, all efforts to shed some light on the organization's depth chart. One of the problems with traditional depth charts, however, is that it's difficult to slot certain players. Is Brooks Laich a center or a left wing? On which wing does Troy Brouwer belong? Where does Matt Hendricks belong? And then there's the matter of how depth is determined - by likely line/role? By talent? By likely NHL games played?

So we decided to take a new approach to the depth chart. Essentially, we've listed the players we think have a decent chance of seeing some time in Washington this year (plus Tom Poti) and ranked 'em by position, allowing for overlap, which makes for a nice visualization. It can't be stressed enough that these are not intended to be read as predicting line combinations or roles (i.e. scorers versus checkers), or even to predict who would be recalled in the event of an injury (if a play-making defenseman gets hurt medium-to-long-term, for example, he's likely to be replaced by someone with a similar skillset, whereas a more defensive-minded rearguard will likely be spelled by someone in a more stay-at-home mold). Anyway, the results are after the jump... 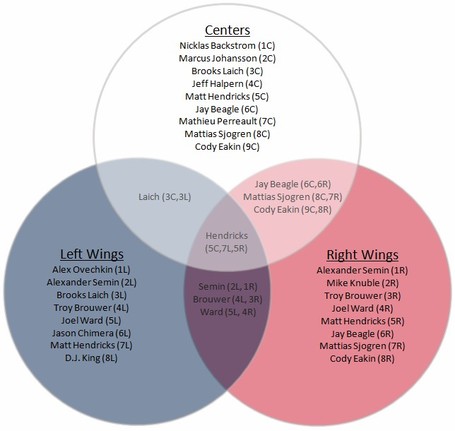 As noted above, these aren't line combos - they're rankings by position, with players on the lists of the positions at which they're likely to play a reasonable amount of their even strength time. So Laich, for example, is the team's third-best left wing and third-best center. Does that mean he's a third-liner? Not at all (though third-line center would be our preference). Joel Ward is listed as the fifth left wing and the fourth right wing. Does that mean he's a fourth-line forward, at best? Nope - since there are only five "better" wings on the team (Alex Ovechkin, Alexander Semin, Mike Knuble, Brooks Laich and Troy Brouwer), and each can only play one position at a time, Ward is solidly third-line talent for this team... which, coincidentally, happens to suit his actual likely role.

It's worth noting that the jury is still very much out on Mattias Sjogren and Cody Eakin and where they fit in, but until we see more of them against NHL talent, it's hard to place them any higher than the bottom of these lists.

On to the defensemen and goalies (again, click to enlarge): 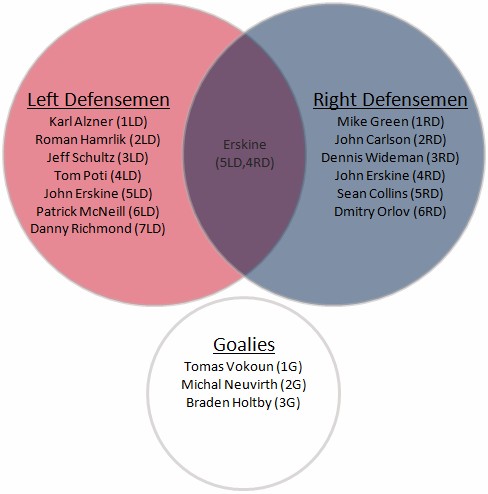 The Caps' top-six defensemen (and pairings, for that matter) would seem to be set - John Carlson with Karl Alzner, Mike Green with Roman Hamrlik, Jeff Schultz with Dennis Wideman - and a healthy John Erskine has that seventh spot locked down, with the potential to slip into the top-six if someone (coughSchultzcough) slips. But beyond that, who gets playing time will really depend on the player for whom they're substituting and what the coaches are looking for out of the replacement. And, as is the case with the lesser-known-at-the-NHL-level forwards above, there is likely to be some fluidity at the bottom of these charts.

Finally, we're pretty comfortable with that goalie ranking (at last, an easy one).

So that's our take on the depth chart - a bit nontraditional, but hopeful useful and somewhat thought-provoking. We'll revisit the post further down the road, but for now... this is what your 2011-12 Washington Capitals look like in our eyes.