Share All sharing options for: Capitals Defenseman Save Percentages

The ability of defensemen to affect shot quality against does exist in the population, but it is so small that we will never be able to sensibly apply it to any player in particular. - Vic Ferrari

Not so fast. To begin with, match-ups have to be considered. Ferrari elaborates on the statement above:

[A] paradox is created, the type of defensemen who are helping the goalie save percentage a bit (presumably because they make fewer mistakes of the spectacularly bad variety) are, as a group, seeing slightly worse save percentages behind them, because they are the guys the coaches are leaning on to play tougher opposition. And the guys who have talent but are guilty of the occasional egregious error ... as a group, they do a whisker better than average by 5v5 save percentage score. This is presumably because their coaches have the good sense not to play them much against Malkin, Kovalchuk and Heatley types.

The result is that a defenseman's save percentage (that is, the team's save percentage at even strength with that defenseman on the ice) isn't a terribly good proxy for ability at all. For example, Nicklas Lidstrom was fourth among Detroit rearguards in save percentage this past season, Shea Weber was second from the bottom for Nashville and Zdeno Chara was third in Boston. All three of those defensemen were all finalists for the Norris trophy.

That said, a defenseman who is out-performing his teammates in this metric - regardless of the competition he's facing - is either getting very lucky or doing everything that's being asked of him... or a combination of the two. Enter John Erskine, who, in each of the past four seasons (i.e. the Bruce Boudreau era), has had a higher-than-team-average DSV%, but has also routinely faced weak competition (in 2010-11, for example, Erskine had the lowest Quality of Competition of any Caps defenseman who played at least ten games). Erskine played well against poor competition - he's a player whose been put in a position in which he can succeed, and he's succeeded.

But what about the rest of Erskine's teammates? To begin with, throwing all the defensemen who have suited up for the Caps over the past four seasons wouldn't be of much value - the team's even-strength save percentage in 2007-08 was .911; in 2010-11 it was .925. So, while it's a bit crude, we'll look at the difference above or below the team save percentage when comparing the blueliners. And to incorporate the "match-ups" component, we'll plot each player's SV% delta and quality of competition (QualComp) for that season. The results are after the jump. 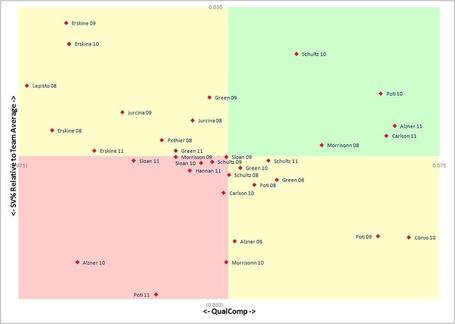 There's a lot to digest there, but here are a few key points:

What we see above is pretty much in line with the general consensus on defensemen's ability to impact save percentage - it exists, but it's awfully hard to quantify and especially to predict, given all of the moving parts (see Poti, Tom). But it's interesting nonetheless and provides plenty of food for thought, especially as we look towards next season and play armchair head coach with the D-corps.