Much has been made of Guy Boucher's implementation of a 1-3-1 neutral zone checking scheme. Below the jump I'll explain how the 1-3-1 works, why the Bolts use it, how they've used it against the Caps, and how to beat it.

Before the jump, I'd like to acknowledge the work of Fehr and Balanced, who provided all of the videos for this FanPost as well as numerous content suggestions and edits. Any errors are my own.

The Tampa Bay Lightning had quite the offseason: a new general manager, some shiny new players like Simon Gagne and Brett Clark, and a dashing young coach with a Prussian dueling scar and a new-fangled neutral zone checking scheme, the 1-3-1.

At its most basic, the 1-3-1 is a variant of the neutral zone trap. A typical trap uses one forechecker to mark the puck, then two forwards behind the blueline backed up by the two defensemen near the redline. By contrast, the 1-3-1 has one forechecker marking the puck, two forwards and one defenseman playing three abreast in the neutral zone backed up by one defenseman who hangs back and plays a bit like a sweeper in soccer or a free safety in football. The purpose of the first forechecker is to take away the center of the ice and funnel the play toward the boards. Once the puck goes to the boards, the three skaters at center ice cut off passing and skating lanes and ideally either create a turnover or force a weak dump-in without speed. The trap is designed to make it difficult to skate or pass through the center of the ice - the 1-3-1 all but completely takes the center of the ice away if played correctly.

The Lightning employ the 1-3-1 because, to be frank, their defensemen aren't particularly quick. Playing the 1-3-1 properly can effectively bring the play to a halt at center ice and mitigate the lack of mobility evinced by players like Matthias Ohlund, Brett Clark and Pavel Kubina. (Keep this in mind when it comes time to discuss how to beat the 1-3-1.)

Despite this, the Lightning aren't a typical "trapping" team like the New Jersey Devils. They actually employ a rather aggressive forechecking scheme at times. Much like the Caps, they fall back to neutral ice when the opposition has uncontested control of the puck in their own end (i.e., during a Tampa Bay line change), or when they've got a lead that they're looking to protect.

The game between the Capitals and Lightning on January 12th, 2011, which the Lightning won 3-0, provides a good example of how the Lightning used the 1-3-1 to stymie the Caps. The following series of play occurred around seven minutes into the game after the Lightning had scored to go up 1-0. 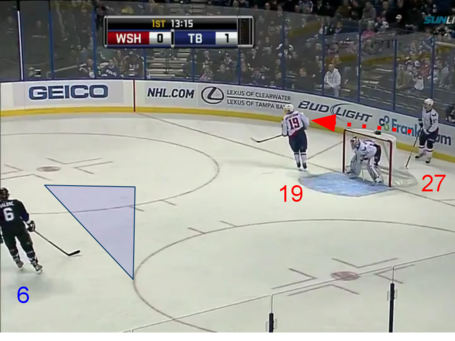 In the first frame, the Lightning have dumped the puck into the Caps' zone and both teams are changing up behind the play, so the Caps have a controlled breakout from behind the net. Karl Alzner waits for Nicklas Backstrom to curl back before passing to him. Ryan Malone is waiting in the high slot to funnel Backstrom to either the left or right boards, as represented by the shaded triangle. 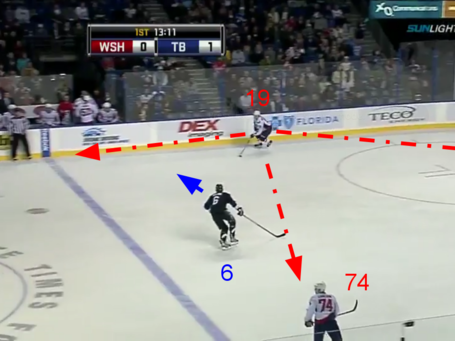 In this image, we can see some of the choices facing Backstrom as he skates up the ice. He can continue up the boards, knowing that this is exactly what Malone is trying to force him to do. Or he can try a cross-ice pass to John Carlson, and he can see that's a turnover waiting to happen. Or he can take the safe and boring choice and dump the puck back to Alzner (off screen), but that's. . . safe and boring. 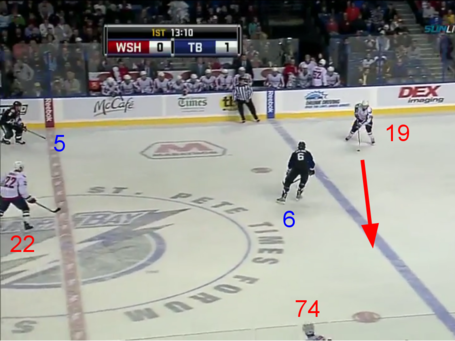 Backstrom chooses none of the above options. Instead he opts to skate the puck back toward center ice. Presumably, he's hoping to use his shiftiness to catch Malone out. Unfortunately for Backis, cutting back to center ice has robbed him of his momentum and slows the whole play down. Now players like Carlson are skating up ice much faster than Backstrom. 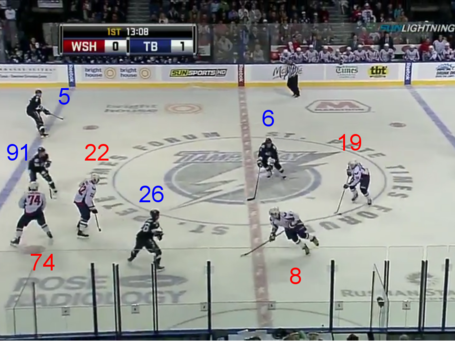 Now we begin to see the traffic jam caused by Backstrom's decision to slow down and skate the puck up. Alexander Ovechkin had been curling back to center ice to gain some speed and now he's right on top of Backstrom. Malone, Martin St Louis and Steven Stamkos have effectively cut off the center of the ice completely. This has left Mike Knuble and Carlson standing uselessly at the offensive blueline trying not to go offside. For the sake of reference, Ohlund's partner Mike Lundin has dropped so far back as as the second "1" in the 1-3-1 that he's off the screen to the left. 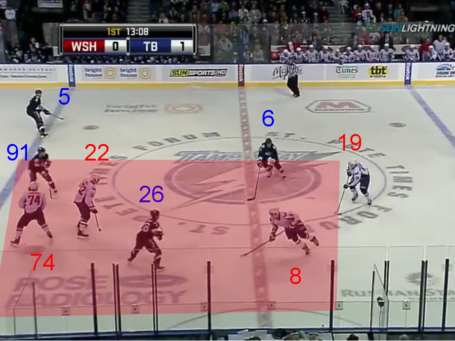 The area shaded in red is meant to show just how terrible a situation Backstrom is in. All of his options are in the red area, but so are three Lightning players. Two of his players have lost all their momentum, so they can't chase down a dump-in. Regardless, Backstrom is still about 10 feet from being able to dump the puck without icing anyhow. His one option with momentum, Ovechkin, has his back turned to him and would have to receive the puck on his backhand skating into a bunch of traffic. That's a recipe for a turnover at best or a concussion at worst. 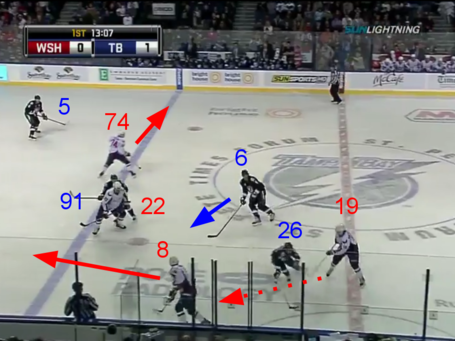 Backstrom takes the one option seemingly left to him, which from the video appears to be an attempt at a bank pass off the boards to a streaking Ovechkin. Knuble and Carlson are just trying to stay onside. St Louis, Malone and Stamkos have everything marked with Ohlund and Lundin in reserve. 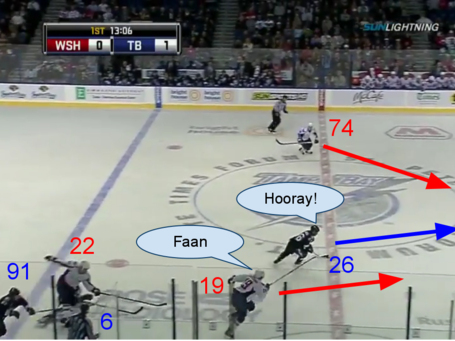 So now that we've seen how it works, how can the Caps beat it?

Generally speaking there are two methods to beat this sort of neutral zone scheme: either by pushing the pace quickly or through patient puck movement. In both cases, gaining speed through the neutral zone and getting around the "3" of the 1-3-1 is key. First we'll look at the agressive speed variation.

One popular means of beating the 1-3-1 capitalizes on the post-lockout abolition of the two-line offside rule and tweaks to the icing rules to allow for dump-ins from the defensive zone. Essentially, the defenseman waits for two forwards to regroup and gather speed, while the third stays deep in the neutral zone on the far side of the redline. The defenseman blasts the puck at the deep forward right as the other two forwards hit the far blueline with speed. If the deep forward can deflect the puck, that's great. If he doesn't, as long as he makes an effort and appears like he was impeded from reaching the puck by a defenseman, icing is waved off. If the attacking forwards gain enough speed, they can always beat the deep "1" defenseman to the puck and negate the icing. For more on this method, see this great write-up in the Hockey Writers. The Caps have employed this method against the Bolts to gain the zone with some success against the 1-3-1. 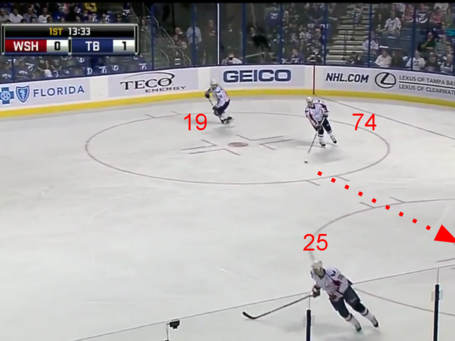 Here, the Caps are regrouping in their own end, Backstrom and Jason Chimera have just curled back and are building speed. John Carlson passes D-to-D to his partner Karl Alnzer (off screen right). The forward "1" in Tampa's 1-3-1 checking scheme (Steven Stamkos) is just off screen left. 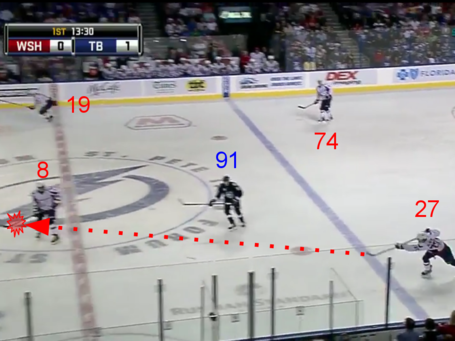 Alzner dumps the puck hard to the opposite corner and Ovechkin appears to slightly deflect the puck. As you can see, even though Stamkos is trying to take away the center of the ice, the Caps have still managed to get the puck through, albeit not with control. At the top left, Backstrom is streaking at full speed into the offensive zone to chase down the cross-ice dump-in. 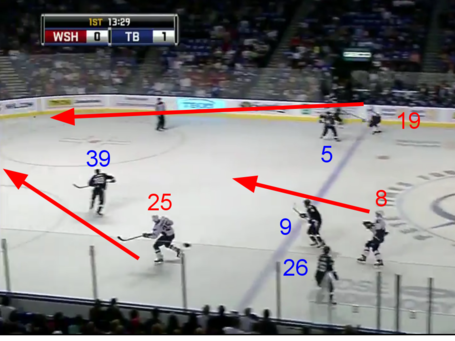 The "3" in Tampa's 1-3-1 finally come into view (Ohlund, Downie and St Louis), but the hard dump-in by Alzner has simply bypassed them. Now the Tampa defensemen are in trouble. Neither Mike Lundin (39), nor Ohlund are particularly fleet of foot and they've got to do a back-to-front transition then beat Backstrom with a full head of steam to the puck. Chimera, meanwhile, is streaking to the front of the net 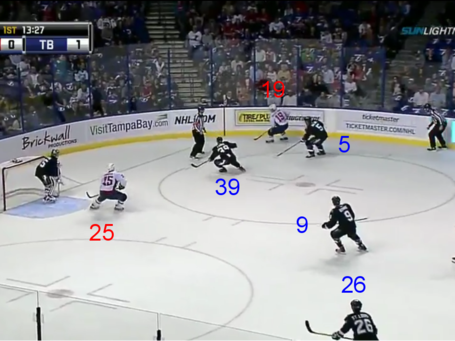 This is the rather unsurprising result - Backstrom beats both Lundin and Ohlund to the puck and Chimera is all alone in front of the net. Ovechkin is off screen right. The Caps are perfectly set up for a good zone possession thanks to a hard dump-in with speed that rendered Tampa's 1-3-1 about as effective as the Maginot Line. Here's a video of the whole play:

The hard, two-zone dump-in isn't the only way to gain the zone with speed agains the 1-3-1. The puck carrier can also attack with speed and force the defense to collapse before dumping the puck and retrieving it himself. Here we see Brandon Dubinsky of the New York Rangers pushing the puck through the neutral zone with speed. As Tampa's "3" starts to collapse on him at the blueline, he dumps the puck in the corner and skates right by them to retrieve it. As was the case with Alzner's dump-in, the Tampa defensemen simply aren't fast enough (and Roloson isn't a good enough puckhandler) to beat the Rangers to the puck. The end result is a goal by Steve Eminger.

As alluded to earlier, pure speed is just one way to beat this scheme; patience with the puck can also break it down by forcing the forecheckers to leave their scheme, thereby opening up seams in which the attacking team can gain time and space, and along with them, speed. 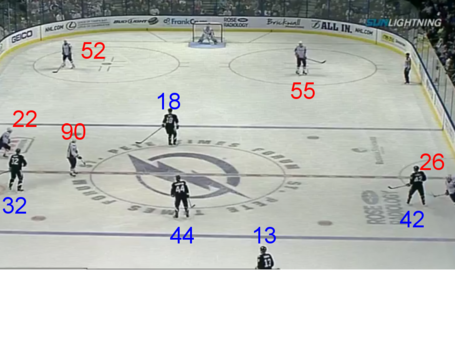 In this image, the Lightning are set up in their standard 1-3-1 while the Caps are patiently regrouping. The Caps are so patient, in fact, that Tampa starts to break their scheme. 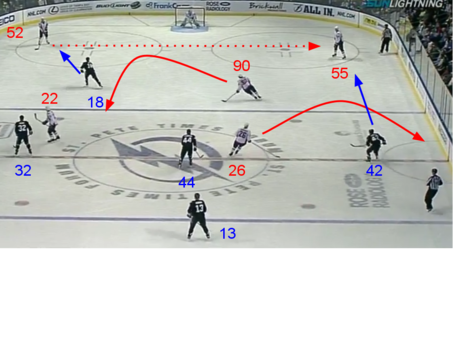 The Caps' patience forces Adam Hall (18) to pressure the puck. Mike Green just calmly passes over to Jeff Schultz, and Dana Tyrell (42) chases the puck, which means that the 1-3-1 is now an out of position 2-2-1. This leaves a huge gap on the right hand side of the rink and Matt Hendricks smartly fills it. 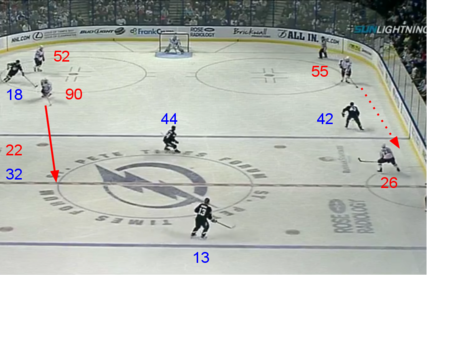 Schultz hits Hendricks with a pass and Hendricks will then turn and dump the puck in. Knuble (off screen left) and Marcus Johansson start attacking toward the offensive zone with speed. Nate Thompson (44), Pavel Kubina (13) and Matt Smaby (32, off screen left) are caught a bit flat-footed and have to scramble to catch up. 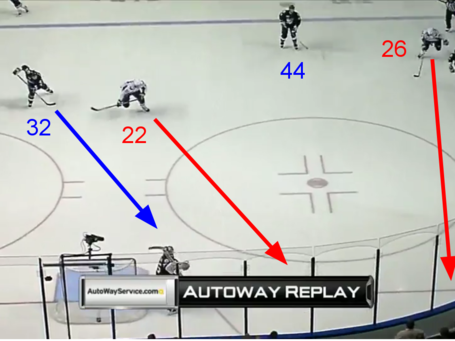 Kubina, Thompson and Smaby can't recover in time and Knuble and Hendricks win the puck in the corner. The whole sequence can be seen in the following video. Crucially, this technique will likely only work when the Caps have a lead, because if Tampa has a lead or the game is tied, the forwards won't feel the need to pressure the puck.

From the foregoing, some lessons emerge about how to beat the 1-3-1.

Playing against this system puts a premium on players who can carry the puck through neutral ice with speed, get the puck in deep and chase it down. On the surface, it's seemingly tailor-made for Marcus Johansson. Mackan could gather the puck in the defensive zone, use a quick deke to blow by the first forechecker, gain the redline and dump the puck in. At that point, wingers like Jason Chimera, Marco Sturm, Mike Knuble or Brooks Laich could recover the puck and begin the cycle.

If the Caps can gain the zone with speed against the 1-3-1, cycle the puck, generate chances and begin to wear down Tampa's defensive corps (while simultaneously keeping Tampa's dangerous forwards hemmed in their own end), it would greatly increase the Caps' chances of victory in the series.