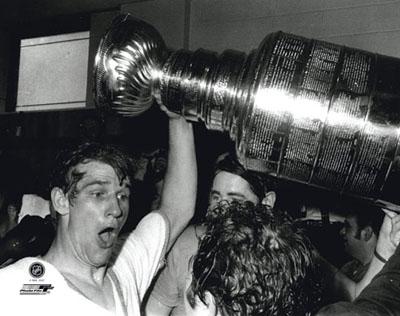 Bobby Orr needs no introduction. Neither does that thing he's holding.

.571. That is the minimum winning percentage a team must sustain through each round of the Stanley Cup playoffs to earn the championship. They have to win four games in every seven game series. Seems simple enough, but of course only one team can possibly accomplish this feat four consecutive times and bring home the glory. Consistency is the key. Any misstep that lasts more than a game or two could be fatal.

Consistency can be a tough trait to measure, but the playoff format itself suggests a way to determine which teams have been the most consistent through the regular season. If you think of an 82-game season as 76 rolling groups of seven games (games 1-7, games 2-8, games 3-9, games 4-10, etc.), then one test of a team's consistency is how many times it achieved .571 or better during those groups of seven games. How many times did the team win at least four out of seven? How many times did it lose four or more? Let's start by looking at the Eastern Conference.

On February 10, when Evgeni Malkin went under the knife for knee surgery and Sidney Crosby's concussion recovery had already passed the one month mark with no end in sight, you had to think that the Penguins were the team most prone to a letdown. Looking back from our vantage point today, it seems remarkable that Pittsburgh ends the season as the conference's most consistent team. Granted, ten of their 52 wins came via shootout. But regardless of how the wins came, Pittsburgh ends the season looking particularly dangerous. And they appear to have the advantage over inconsistent Tampa -- the worst Eastern Conference performer in this measure.

Philly/Buffalo and Boston/Montreal are identical matchups of teams that won at least four out of seven games 50 times versus team that managed it 46 times. That's not a huge difference between the favorite and the underdog. Those could be wild series. And then there's Washington/New York.

Though New York ended the season with 14 fewer points than the Caps, and on the brink of elimination, New York was actually a more consistently successful team during the regular season than the Caps. The Caps' highs were much higher -- the Caps won six or seven out of seven 15 times, the Rangers only 3 times. But the Caps also lost four of seven more often than the Rangers did. And the Caps' up and down swings are not all due to the 8-game slide in December. Starting from January 1, the Caps lost four of seven games 16 times -- more than half of their total on the season.

None, however, have come since the trade deadline. Jason Arnott, Dennis Wideman, and Marco Sturm joined the Caps on February 28, 2011. The Caps proceeded to win their next eight games. Since the February 28 trade deadline, the Caps have won seven out of seven twice (both during that eight game streak -- nine if you count the game immediately before the deadline), six out of seven 3 times, five out of seven 6 times, and a "mere" four out of seven 2 times. They have no, in any seven-game stretch, lost more than they won since the deadline. Veterans are supposed to bring consistency -- and that appears to be exactly what they've done. By this (and any other) measure, January and February were rough months, and George McPhee deserves a lot of credit for taking decisive action to improve the team.

How does this year's team compare to other recent Caps squads?

For those of you who have checked in sometime over the last four seasons, here's a summary of the first two seasons after the lockout: they were bad. Really bad. But things did seem to be improving over time. Then, in the beginning of the 07-08 season, the team took a big step backwards. The first time the Caps won four out of seven in the 07-08 season was on the group of games ending with a victory on December 12, 2007. That was 31 games into the season, and it followed 24 consecutive groups of seven games where the Caps had lost four or more games. And of course, it followed a coaching change -- Game 31 was Bruce Boudreau's 10th game behind the helm. All his team has done since then is win four or more out of seven 208 times and lose four or more just 72 times.

The Caps' most consistently successful season since the lockout was last year -- no surprise given the way the way the Caps dominated the leagues from game 1. For those who believe that there is some value in adversity, this measure shows quite how little adversity last year's squad faced.

It's also interesting to note that the 08-09 team was more consistent than this year's squad. It's easy to point to having a full season of Sergei Fedorov as one possible reason why that team kept a steady course and an even keel. That team also made the Caps' best showing in the playoffs since the lockout.

Vancouver and the other division leaders look great using this measure, and so do the LA Kings, who appear to have kept a very even keel through a tumultuous season for them. It's a quality that will serve them well as they face the playoffs without their two leading scorers. To their credit, Saturday's loss to Anaheim marks the first time the Kings have lost four or more out of seven since February 2 -- even as Williams and then Kopitar went down.

By this measure, it looks like the better team may have backed into the playoffs yesterday. Chicago has been far more consistent than Dallas. And overall, it looks like the top playoff teams in the Western Conference were more consistent performers than the top playoff teams in the Eastern Conference. That should come as no surprise, given how much harder it was to make the playoffs in the West than in the East this year. But how do these teams compare to the historical results for recent cup champions?

None of this year's playoff teams were as consistently successful as last year's Hawks, much less the truly remarkable Penguins of two years ago. It's hard to believe that team's coach was fired mid-season -- they lost four games out of seven only 3 times that entire year (once under Therrien, twice under Bylsma). There is no team this year that matches that level of consistent success. Interestingly, the 08-09 Penguins didn't even win their own division, and they were tied for fourth in the Eastern Conference for points. When I did a similar fanpost that year, I did not include the Penguins among the "top cup contenders" and didn't even analyze their season. Perhaps if I had, we'd have recognized Pittsburgh as the league's most dangerous team. (I'm not making that mistake again -- I've included all 16 playoff teams above). The 2009 Pittsburgh continued their pattern of winning at least four of every seven games through the playoffs, and ultimately brought home Lord Stanley's Cup.

On the other end of the spectrum is the 05-06 Hurricanes -- a team that won four of seven less frequently than any playoff team this year except Phoenix. But their Cup run was driven by Cam Ward, who played only 28 regular season games that year. And if you count just the games in which he was credited with a win or a loss, Ward won four of seven 14 times, and lost four of seven only 3 times. (Of course, as the backup, many of these games were separated by days at a time.)

It seems unlikely that this year will be affected in any kind of similar way by a player who comes out of the blue, but then again, History Always Surprises. Overall, this chart demonstrates that the bar for winning the Stanley Cup is quite high, and that in 2010-11 no team can match the steady consistency of Chicago last year or Pittsburgh the year before. Looks like this year, the field is wide open for any team to claim the Cup.