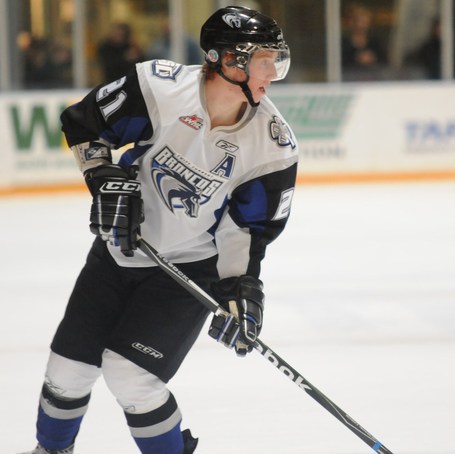 Photo via scbroncos.com, all rights reserved

The head honcho around here and I were chatting about a comparable for Cody Eakin.  I mentioned in passing that the closest NHL comp for Eakin is Maxime Talbot.  He asked for an explanation, so below is the basis of that comparable.

But their playing styles are similar as well.  Eakin's scouting report from NHL Central Scouting could be applied to Talbot without changing a word:

"Cody is a tremendous skater and a lot of the things he does come from his skating ability. He's also ultra-competitive, and where he has a lot of success is getting in on the forecheck and chasing and racing for loose pucks. He also uses his speed a lot with the puck on the entries into the offensive zone. His speed also helps him in the defensive zone by catching guys from behind and creating turnovers in situations where guys who don't skate as well wouldn't be able to do. He beats a lot of guys to the outside and that's because of his skating ability."
Eakin and Talbot not only converge on size and style, but their CHL production is frighteningly similar

Their raw points per game by age don't look similar.

However, Talbot played for a much more offensive team, an Ales Hemsky-led Gatineau Olympiques squad, than Eakin's Swift Current Broncos.  A look at the team goals per game in each season shows this.

This is the level-set CHL output for a 72 game season:

Lastly, compare their individual portion of goals scored for their respective teams: