Share All sharing options for: Capitals and Oz Coke

One of the more popular new developments this year is the OZQoC Chart (Pronounced "Oz Coke"), which is a handy visual representation of how players are being used. At a glance it's an easy way to understand the roles assigned to each player so we have the context in which to study their statistics. - Robert Vollman, Hockey Prospectus

With ten goals in 25 games (nine at even strength), Jason Chimera is well on his way to having a career-best season. And as impressive as his raw goal total is, what makes it even more so is that he's done it while facing just about the hardest competition of any Caps forward while starting his shifts in the offensive zone less frequently than all but two of his teammates. Context adds a lot to analysis.

And that's where "Oz Coke" comes in. By plotting zone starts and quality of competition on the same chart, we can get a good idea of who's playing the tough minutes and who's being protected, who's got mitigating factors for underperforming... and who doesn't. [One note: this analysis includes post-icing zone starts, so it isn't a perfect reflection of which zone starts the coaches have chosen to use their players in, but it's close enough.]

After the jump are two Oz Coke charts - one for the Caps' forwards, one for the D (through 24 games). We're going to use Corsi Rel QoC as our proxy for quality of competition, as it seems to give a better indication of roles than QualComp, but either would do the trick. And just for fun, before clicking through, try to think of who you believe is playing the hard and easy minutes and see if you're right. 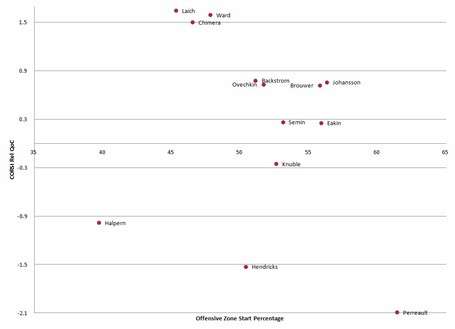 Some notes on the forwards:

Now, on to the blueliners... 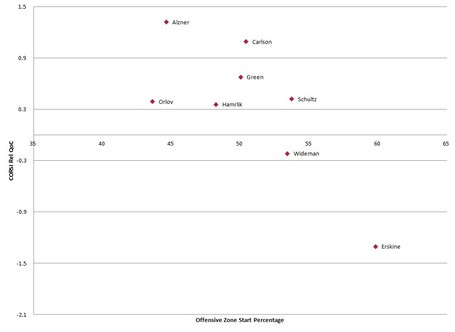 Perhaps the most interesting thing about the above is that it's (almost) a baseline for the Dale Hunter Era - let's check back in 30 games from now and see who's moved, who's stuck... and who's doing what with the assignments they're given.