Nicklas Bäckström gave an interview to Swedish Radio after the game against the Winnipeg Jets. Below is a transcript of the interview. Obviously, the interview is in Swedish, but if you listen to the interview starting at 4.27, you can hear the team celebrating in the shower.

SR: Nothing has worked for the Washington Capitals this season. Ovechkin doesn't score any goals, the coach has been fired and the last time they were in Winnipeg they lost the game 1-4. So Nicklas Bäckström, who together with Marcus Johansson assisted on the only goal of the game by Alexander Ovechkin, is pretty relieved when he finally leaves the celebratory howling in the showers.

Nicklas Bäckström (NB): "Yeah, we really needed to win this game. So far we haven't been as successful as we were hoping for this year, so every win is of great importance."

SR: Winnipeg is not the easiest team to face either as you noticed last time you were here.

NB: "Yes, exactly. They beat us pretty badly last time we were here. It was quite embarrassing really but I think our defense was good in this game and our goalie had a great game, and the goal at the end was more luck then anything so we had the bounces go our way this time."

SR: It was a great game for me seeing two Swedish players assisting on the game winning goal with just a minute left of the game. [Ed note: It was the first time ever that Bäckström and Johansson both had an assist on the same goal.]

NB: "Well that's perfect then. Just the way it should be." 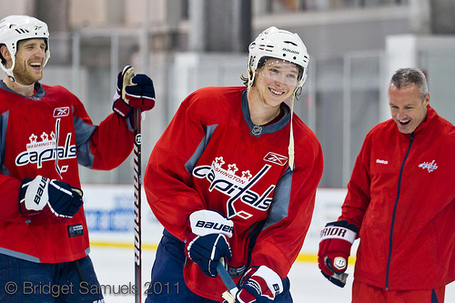 SR: It's hard to watch a Washington Capitals game and not wonder what's wrong with Ovechkin? Even though he scored in this game.

NB: "We've talked about it a lot. I don't think it's just about Ovechkin. It's the whole line's fault that our game hasn't been anywhere near what we expect from ourselves. I think we need to simplify our game and most importantly work harder. When you do that the scoring opportunities are bound to come.

The new system isn't as complex as the old one was. Hopefully that will work better for us, and it will lead to us scoring more goals. When you get as much ice time as we do, I think it's only fair to demand that we score more goals than we have so far."

SR: But you have been producing this year, 32 points or so, right?

NB: "If the rest of the team isn't doing well, it's not going well for me either. That's just the way it works."

SR: The way this game played itself out the win must have felt pretty good.

NB: "Yeah, you always want to win the tight, low scoring games. As I said earlier we were a bit lucky to get that goal at the end, but it always feels damn good to come away with a victory in a close, low scoring game like this one."

SR: Your PR guy is starting to look kind of nervous.

Voice in the background: "The bus leaves in 15 minutes and you better be on it."

SR: Do you have a theory on why streaks happen? Both the good and bad kind?

NB: "I think self confidence has to lot to do with it, if you have a good feeling in the team or not. When you are on a winning streak the puck usually bounces your way, and on the other hand when you are on a losing streak nothing seems to be going your way. That's just the way it is in hockey. It's all part of the game's charm."

SR: It's always so easy to recognize you on the ice. I don't even have to look at your number to see that it's you, because you always tilt your head slightly.

NB: "Tilted head? Eh, no. That's not something I ever thought about to be honest. I was sure that you were going to say that I was easy to spot because I'm so slow on the ice."

SR: You had a really good year this year, not that you were bad last year but you have an important role on the team.

NB: "The team puts a lot of faith in me. So even if I skate around with my head slightly tilted, it seems like things are working pretty good for me I guess."

SR: It wasn't meant to be taken as criticism. It was merely an observation.